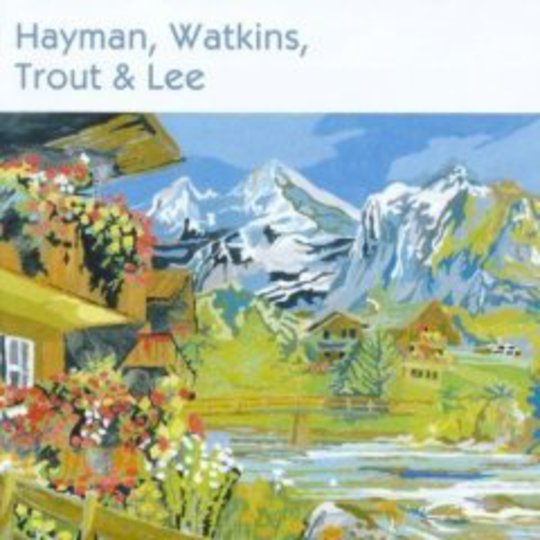 “Fourteen dynamite tracks of East London bluegrass.” – it’s not the sort of press release you see everyday. This project (headed up by Darren Hayman (ex of Hefner, recipients of recent reissue treatment) and Dave Tattersall (he of recently celebrated The Wave Pictures) is something of an oddity in today’s musical climate; an appropriation of a genre that’s roots are as clouded as any other, imbued with a strong London bent and originating from a speculative conversation at a dinner party.

Recorded over two days in Hayman’s kitchen, Hayman, Watkins, Trout & Lee were purportedly little more than a hobby until Tattersall’s arrival last year, and this album – though falling short in a few aspects and perhaps implicitly niche in appeal – does contain its fair share of treats. It’s overlong, the smattering of traditional numbers covered instrumentally an indulgence too far for this 14-tracker, but when it hits its stride – notably on its more reflective moments – it’s far better than any album of (ahem) dynamite East London bluegrass has any right to be.

Alongside a couple of Townes Van Zandt covers (including a resoundingly affecting ‘Tecumseh Valley’) and a take on The Mountain Goats’ ‘Jam-Eater Blues’, it’s the self-penned ballads where the album’s real strength lies. Opening track ‘Sly And Family Stone’ (Hayman) sets the stall comfortably and with notably enjoyable harmonies come its chorus: “I… ain’t got no money / But she spends hers on me / I’m a kept man”, while ‘Fine Young Cannibals’ (Tattersall) in its mournful tone, plucked banjo and plaintive fiddle strokes, is similarly memorable. Worth noting is the baffling absence of correlation between said tracks and the acts they take their names from, mind.

London permeates this collection as you might expect – oddly through the lyrics of one John Darnielle, and more obviously on the 2008 update of ‘Freight Train’, ‘Dirty Tube Train’, and closing ‘Bethnal Green’. The former is a lewd stomp detailing the merits of fleeting crushes on the city's hygienically challenged underground system – little more than an extended joke – though ‘Bethnal Green’ supplants this slightly self-satisfied humour with a fervent sense of longing and the most successful outro on the album, and acts as a fine farewell to a well-judged and as stated, intriguingly successful endeavour.