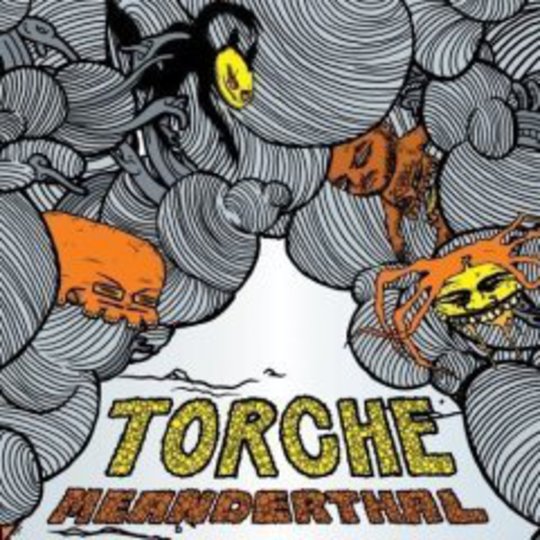 In the tradition of Dinosaur Jr, Soundgarden and The Melvins before them come Torche, an ear-splitting pop band from Florida whose key selling point is that you don’t need a massive set of stereo speakers to hear that everything they do is loud. It’s simply how they roll… terrifying momentum threatening to destroy everything before them… titanic choruses and sing-along lyricism bundled up in a dam-busting bouncing bomb of an LP.

Read that back and spot the deliberate non-mistake – yes, Torche’s material, as skull-quaking as it is when surging from ear-enveloping cans, is absolutely pop in structure. Here’s a verse, a chorus, another verse; everything’s super-amplified to synapse-shredding levels, but nevertheless Meanderthal rocks to a conventionally acceptable tune, the considerably crunched riffs which come thick and fast – incredibly thick and dizzyingly fast – rarely rampaging from avant-garde corners. Thus, accessibility is immediate, these 13 cuts more attention-throttling than anything the four-piece have previously released, namely 2005’s self-titled album and last year’s phenomenal In Return EP.

‘Triumph of Venus’ is a misleading opener, wholly instrumental for its minute-forty duration; ‘Grenades’, the very next track, sets the album’s tone somewhat more effectively, an open-throated head-back holler of a vocal rising above duelling guitars that attack from both cones as if the returning ghost of Thin Lizzy had fallen obsessively in love with Rated R before putting the willies up you. With members having done time in both Cavity and Floor, there’s no doubting Torche’s sludge credentials in the stateside underground, but here they’ve melded hooky melodies to the expected slow-ground cacophonies, and the results are often fantastic.

A few more highlights from an impressive throng, then: ‘Healer’ is a breakneck-speed foot-to-the-floor driving anthem, its towering guitar motifs a wonderful bettering of what’s made Queens of the Stone Age a household name; ‘Sundown’’s series of builds and collapses ultimately finds vocalist Steve Brooks buried by thundering percussion forceful enough to bludgeon open the planet’s deep-sea fissures, flowing the earth’s innards into the ocean’s blackest extremities; and the closing title track features the kind of rumbling shock-and-awe acoustics most commonly associated with disaster movies, when a monster of some non-specified origin lays waste to an entire city. It, like Meanderthal’s opening gambit, is entirely instrumental; unlike its lyric-less counterpart, it’s rich in a menace that could have seen listeners flee had it bled out any earlier.

With hooks less the size of anchors, more the size of battleships, Meanderthal is sure to be an album of the year contender amongst critics experiencing the early stages of tinnitus. Those looking for dimensions beyond the single, albeit absolutely absorbing, one on show here will grow tired of Torche once the adrenaline subsides, but sorts with even the slightest tendency to occasionally bang heads along to some rollicking rock music should set out to investigate this release as soon as they can.