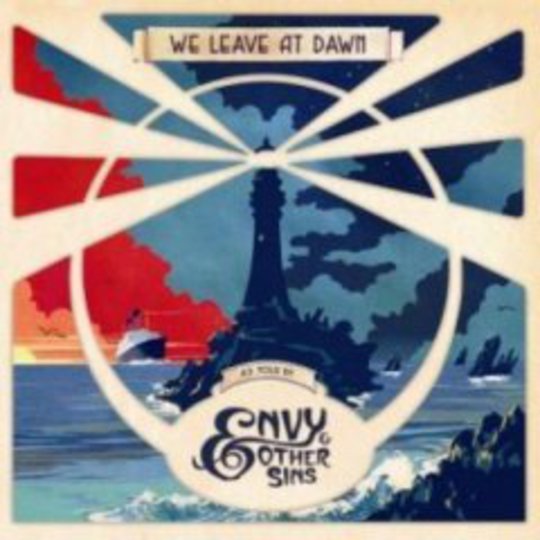 Although this album was likely to eventually see the light of day with or without the intervention of A&M/Polydor – its makers have their own studio and were in the process of releasing a single before their career tangent shifted towards Channel 4 – it’s tough to not read anything relating to Envy & Other Sins’ working relationship with the label they ‘won’ on televised talent show mobileAct Unsigned last year in the lyrics to LP opener ‘Morning Sickness’: “It’s all a mistake, and these people keep chipping away at me / And I don’t have what it takes, it’s all a mistake.” Coincidence? If you say so.

As our interview with the Birmingham four-piece revealed last month, the band haven’t exactly been enjoying the high life after triumphing over fellow finalists Revenue and ducking into the studio alongside Coldplay producer Danton Supple; they’ve a debut album finished and available sooner than anticipated, for sure, but questionable scheduling decisions at levels beyond band control have led to suggestions that A&M are looking to sweep this lottery-attained signing under the carpet rather. Perhaps the label lacks confidence in E&OS, but if that’s the case it’s hard to hear how: a well-crafted, concise and punchy debut, We Leave At Dawn makes many a nod at commercially successful acts present while also slipping neat twists under the noses of those attracted by its considerable pop hooks.

Single ‘Highness’ might smell a little of previous tourmates The Hoosiers – not a bad thing when quirk-pop’s done right, as it is here – but elsewhere the quartet reveal shades to their songs that cross colour-it-in lines a la Mystery Jets, and nuances that well exceed what little was heard of the band’s potential on their televised 15 minutes. ‘Man Bites God’ possesses a confident swagger and rollicking bassline that’s impossible to not tap a digit along to; album title-referencing number ‘Don’t Start Fires’ is a mini-epic full of understated drama that, in the hands of an act like Muse, would be a massive stadium anthem; and the closing ‘Shipwrecked’ is a delicate and tender torch song that wobbles on ‘No Surprises’-ringing rails before tumbling into a cacophonous climax that sees the album to a close in a shower of fireworks.

They might not have stuck it to the man in order to get this record out, but by making compromises where they felt them necessary E&OS have produced a debut worthy of a smattering of applause, a modern pop long-player that takes cues from familiar sources but adds enough unique characteristics to suggest a follow-up could well carve the band their own niche in the musical landscape. It’s full of more immediate highs than lingering lows, and while it’s no classic, not an album to celebrate as one of 2008’s finest come December, considering the backlash possibilities available to sharp-penned critics relishing the chance to lay into a Jo Whiley-approved – via mobileAct, if not her radio show – band, We Leave At Dawn is a commendable success. Pre-release sceptics can tuck into that humble pie whenever they’re ready.