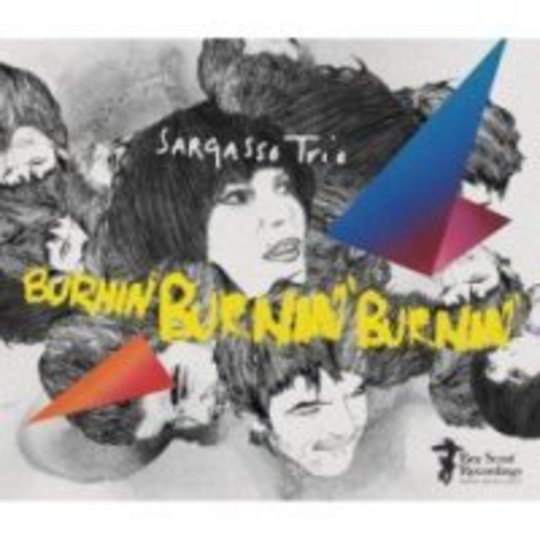 The influences come fast these days. First-wave post-punk greats were the order of the day a few years ago. Then came the return of the odd rave klaxon, and this year we’ve so far been subjected to prep-school afrobeat-loving whelps who may have already exhausted their source material.

Before someone decides to mix Japanese Noh music into their indie rock (it’s bound to happen at some point), we’re now being offered the samba-infused musings of Sargasso Trio and their debut LP, Burnin', Burnin', Burnin'.

Hailing from Norwich, the two men and lone woman of the band reportedly met in their local forty-piece marching samba band before taking logistical issues into account and trimming down to a three piece who dabble in the musical cross-pollination that’s practically de rigueur in these low-cost airline days. So instead of being an unlikely samba act from Britain as their past may imply, the band pick and choose from a shared love of folk, samba, country and just the odd tinkling of '80s synths for their South America-meets-modern English pastoral vibe.

Sounds like the fixings for an electrifying cultural stew, doesn’t it? The kind once championed by Tropicália legends Os Mutantes, or at least something peddled by alumni of the Devandra Banhart School for weirdo folk. Unfortunately, Sargasso Trio chose to play it surprisingly safe. Tracks like ‘She’s a Woman’ stick to a palatable new-folk that merely flirts with samba or bargain-bin keyboards for results that are just a little too easy-listening for their own good.

Yet it’s not all stuck in the middle of the road. Recent single ‘Heels on Fire’ amps up the carnivale rhythms, while ‘Get Workin’ On Me’ pulls out all the stops by slamming together their Samba past and folk tendencies for a highlight that approaches breathtaking.

Not a failure then, but not the success it could have been. Burnin', Burnin', Burnin' allows us a peek at what Sargasso Trio might be capable of if they pushed things to an edge they occasionally approach here. Here’s hoping they find the courage for next time.

Rocket From The Crypt