Our Brother The Native

Make Amends For We Are Merely Vessels 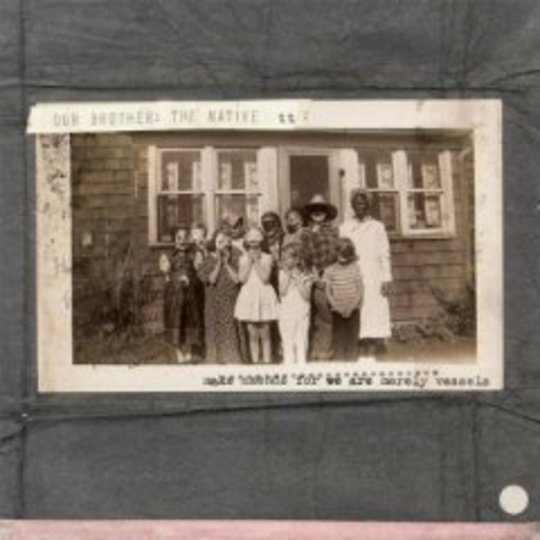 For their first record, Our Brother The Native sent each other recordings over the internet and built upon them very systematically. This time, with Make Amends For We Are Merely Vessels, they played and wrote in the same room. Makes sense, yes? Also, the oldest of them was born in 1986. This, I think, makes Our Brother The Native the first band I've ever reviewed in which every single member is younger than me. That makes me want to vomit. I've still got a Young Person's Railcard.

Now then. With all that youth on their side, it would be reasonable for you to assume that a large amount of energy and juvenile exuberance would make its way into the music. But you'd be wrong, you idiot! Conversely, this band's craft is clearly the product of deep thought and careful placement of ideas. Post-rock is probably the tag that most people are slapping on it, and it certainly contains the necessary dramatic and panoramic dynamic range… and the gloom. But there are deeper thoughts here, larger and more intricate ideas. Like a model village with working streetlights rather than a Lego house, if you like. After an insanely slow start, 'As They Fell Beneath Us' builds and explodes into some truly ghastly (in the good sense) shrieking. It's just about worth the wait to hear kids shrieking with such vigour.

There's triumph just when we need it as well, although it is a bluntly predictable anthemia rather than that bit where the trumpet comes in on the first bit of the first disc on Lift Yr Skinny Fists. It arrives, with uncharacteristic simplicity, on 'Trees Part 1' and thumps you about for its duration very convincingly. It could be the stark difference in thickness and baseness of the texturing that makes it stand out, and the lack of complication could be intentional, but one feels that it could equally just be a blank spot in the creative canvas. This is probably the only section in which this kind of confusion occurs, thankfully, but it's a shame for such an impressively constructed record.

On the final (and the longest) expression, 'The Multitudes Are Dispersing', we reach a kind of summit. Ghostly operatic warbling burbles under nondescript piano meanderings for, again, about a day, until we're finally shown the way. A tremendous choir soon clambers into the foreground, with whizzes and pops and the opera singer all still lolloping in the back, the piano suddenly becomes more focussed, the choir's melody links cleverly to it, and we're only five minutes in. It felt like five seconds, such was the scintillation. But only a dick would leave it there, obviously, so we're gently ushered (via that ever-evolutionary piano line) through some found-sound tape recordings that Godspeed (last mention of them, honest) would be quite happy with. And that's it for the next eight minutes. Sometimes we lose the piano, sometimes we get cymbals, sometimes we get glockenspiel. What we're aching for with uncontrollable fervour is for that blind triumph from earlier to be stuck on the end and make us feel like we've seen a cataclysm but, to their credit, OBTN give us nothing more than a little bit more choir and a lot more soundscaping.

To give us that much triumph early on now seems like the right thing to do, because it allows us to want for it when the record is finishing. Many people don't realise that some of the most powerful music simply refuses to give us what we want. When Sigur Rós crash their way through their later material you feel wonderful, but you don't feel interested. The lack of feeling is what impresses here, and the way feeling is manipulated in such a mature fashion for a band so young.