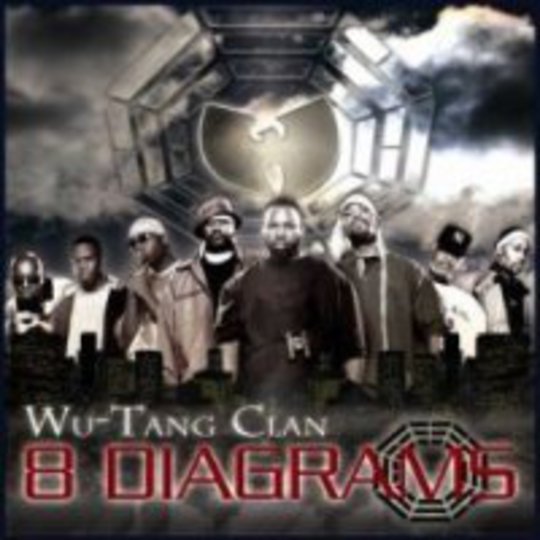 As is the ramshackle nature of the Staten Island statesmen, it’s difficult to even peg down whether 8 Diagrams has yet to receive a bona-fide release in the UK. Either way, in some form or other, it received another release on Monday, February 11, and provides another opportunity to herald it as another staple dose of Wu Tang’s usual beguiling bedlam in their first return since 2001’s lukewarm bedpan, Iron Flag.

The album comes shrouded in the usual nonsense that has made the Wu such a spectacle: Raekwon labelling RZA as “fumbling the ball [...] his music wasn't sounding like how it was when we first came in”, and calling the Wu lynchpin a “hip-hop hippie” all but as soon as this return had been announced. Amid the humdrum it was then broadcast that the record was to be released on the same day as Ghostface’s Big Doe Rehab. Despite the debacle, 8 Diagrams, whittled down from an apparent 50 tracks, more than fills the gut, even if others weren’t content with what RZA had served up. But as GZA proclaims “we criticize producers ‘til they joints are right” on the symphonic stomp of ‘Rushing Elephants’, there seems the sense that it’s little more than some blithe jibes.

It’s easy enough to see where the complaints came from as soon as Method Man cuts in over the standard kung-fu cuts and ‘Campfire’’s Curtis Mayfield sample and hefty bluesy blow; his lumbering raps, alongside Masta Killah and U-God’s, suit the dub hubbub and lolling pace of the record but it leaves the spitfire lyricists of Ghostface and Raekwon ostracised, the pair spending half the time waiting for the beat to catch them up. But for all the calls that RZA has softened, listening back to the crew’s 1993 debut venture, 36 Chambers, it’s easy to forget the similarities. Those cumbersome bass lines and inebriated bar piano hooks remain, particularly with the hushed ruckus of ‘Take It Back’.

Tacked on to the end of the UK edition are three tracks that basically pay tribute to the absence of Ol’ Dirty Bastard following his overdose in 2004, particularly in the form of ‘Life Changes’ as all gather round to pay their respects. It is more than enough to distract from all the nit-picking surrounding whether the Beatles sample on the droll-as-fuck ‘The Heart Gently Weeps’ was an interpolation or direct rip. Instead, George Clinton is about as fitting a contributor as Wu Tang could have roped in, with his deranged bawl on ‘Wolves’ as fitting as an ode to ODB as any, rambling on about eating grandma and later his “full-metal jacket of vernacular ballistic” on ‘Tar Pit’ before an old rip of ODB’s ‘16th Chamber’ plays out.

As ever it’s an erratic outing. But even when 8 Diagrams hits a dud - the occasional mawkish crooning that creeps in on ‘Starter’ and ‘Stick ‘Em For Your Riches’, RZA’s self-fellating ‘Windmill’, and Mobb Deep off-cut ‘Gun Will Go’ - there’s plenty to captivate if not just Inspectah Deck’s ever hit-and-miss announcements (“Notice how we band it with them knuckles bare / WU TANG! / keep it fresh like Tuperware”).

All in all, it’s the usual captivating chaos.