... And With The Fading Of The Light 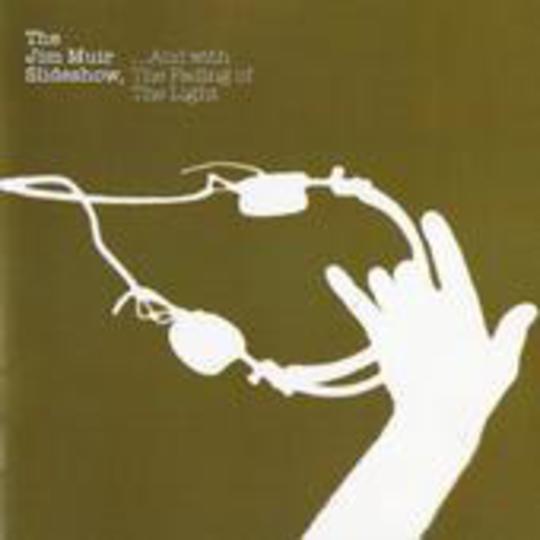 "And there's no ecstasy left to save us", states Jim Muir on the opening line of his Slideshow's debut LP, and the tone is very much set. This is not a record to put on just before you go out, that's for sure, nor is said opener, one imagines, ideal comedown listening.

Still, as a just-before-bed album it's perfect. Not necessarily in a_ "gee, this is really dull, where did I put that book... zzzzz" kind of way, rather JMS's _"cotton-wool arrangements and soothing melodies" approach offers an easy late night listen. The title, then, hits the nail squarely on the head.

Jim Muir calls himself "a storyteller rather than a rock musician", and that description is also one that rings true. The words are given utmost prominence in the mix, with guitars/bass/keyboards a supplementary, rather than overriding, concern.

The main pitfall of this approach is that Muir's voice bears comparison with Travis' Fran Healy - slowies like 'Take It Easy, Owen Meanie' (!) and 'Anaesthetise Me' sound a little grating as a result. Of course, if you're a fan of the aforementioned Scottish popsters that's less a problem and more a recommendation.

Perhaps the biggest problem, though, is that Jim Muir's stories don't really go anywhere. Nowhere of interest, at least. Lines like "Sometimes London is beautiful", "You might not be as bad as you think you are" and "I ache whenever you are not near" are the most obvious offenders, but there's plenty more where that motley bunch came from.

Two of the album's creators - Jim Muir and keyboard player/co-vocalist Paul Galpin - are both trained doctors, and thus the human condition is a subject that crops up repeatedly. References to "human tissue", "eight long hours under artificial light" and "the district general" knit together a recurring theme but, again, it's just not an especially riveting one. Essentially, doctors and rock 'n' roll don't make good bedfellows.

It's frustrating, because ... And With The Fading Of Light has its moments. 'After The Fireworks Pt. 1', the title track and 'This Is London' both boast pretty memorable choruses - musically speaking - and with the tempo increased the JMS sound more like a band than a GP reading extracts from his diary.

In a nutshell, that's what makes ... And With Fading Of Light an ultimately unsatisfying listen: despite some nice, understated musicianship, there's nothing here to, um, get the blood pumping. Trade the stethoscopes for Stratocasters, perhaps, and then maybe we can talk...

The Courteeners at The Rescue Rooms, Nottingham, Nottinghamshire, Mon 21 Jan