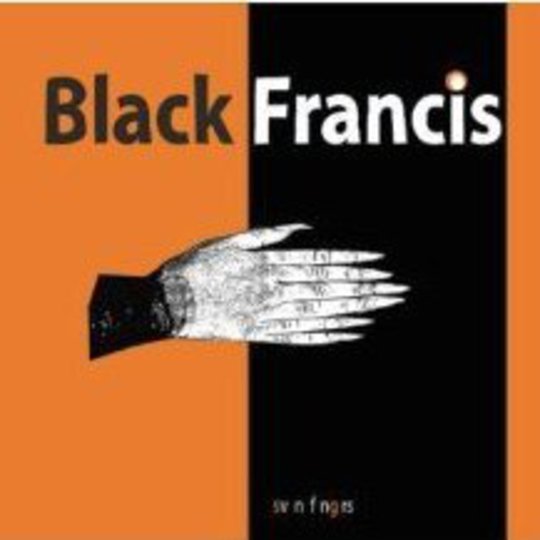 A couple of months ago, the ever-reliable Cooking Vinyl sent Frank Black aka Black Francis aka one of the most prolific songwriters of the last howevermanyyearsitisnow into the studio to record a B-side. He came back with a seven-track mini-album, written, recorded and mixed in under a week. Let’s be honest – considering he’s released, on average, over an album a year for the last eight years, surely they should’ve expected this? And anyway, when someone’s as outrageously talented as Frank is, belching out quality songs seemingly at will, it’s hardly a bad thing, is it?

Lasting only slightly longer than 20 minutes, Svn Fngrs is a joyously lo-fi collection of songs which proves that even his most unrefined efforts have nuggets of purest genius in them. The closer, ‘When They Come To Murder Me’ is a throbbing beast of Americana, all relentless driving drums and a chorus that, although it never hangs around for long enough to get boring. “I was born in a double orgasm,” he grunts, as if to affirm his status as a permanent outsider almost from birth. And, while he’s obviously never fitted flush with any so-called traditional ideas of what is and isn’t pop/rock star, the point is that Black’s still around and still making music better than most of the young bucks out there. It’s a joyous celebration of the fact that he’s been a step ahead of the pack probably since the inception of That Other Band – “When they come to murder me / I’m already gone, bye-bye,” he drawls. Sorry chaps, you won’t catch him.

There’s still the air of wilful pissing about, too. ‘I Sent Away’ is about the joys of, er, mail order set to a punk structure so rickety it feels like the song could fall apart at any moment. But when it doesn’t – and the playful harmonica contributes to the sense that Black’s just bashing away at his guitar and making up lyrics on the spot – there’s no sense of disappointment at all. Clocking in at just over two minutes it’s over before it’s even begun, feeding into the cheeky stomp of ‘Seven Fingers’, which is built around a melody so irresistible it should be added to broccoli to make the fat kids of England lose some weight. The overriding feeling is that Svn Fngrs could have been refined, tweaked and buffed into something that it’s not meant to be, and is all the stronger for the blind alleys and the apparently-random procession of ideas that Black chucks about. Need further proof? Check out the opener ‘The Seus’, which is as blatant a piss-about as you could possibly hope to find. It sounds like he’s trying to filter some purposely oblique lyrics through a call-and-response verse and deliberately messy guitar like he’s attempting to write the most half-arsed rap song ever conceived. And yet its character and charm remain undimmed, like he’s letting you in on some private joke or allowing the world to sit in on his demo sessions which, let’s face it, is what this album basically is.

It might seem annoying and a touch indulgent, but Frank Black hasn’t earned the right to have his record label release pretty much everything he wants because ‘he’s Frank Black’; they release it because he seems to be almost incapable of putting out music that’s devoid of merit. And while Svn Fngrs isn’t a lost masterpiece it pulls its coherence directly from its inspired madness, which immediately makes it worth investigating.

... And With The Fading Of The Light