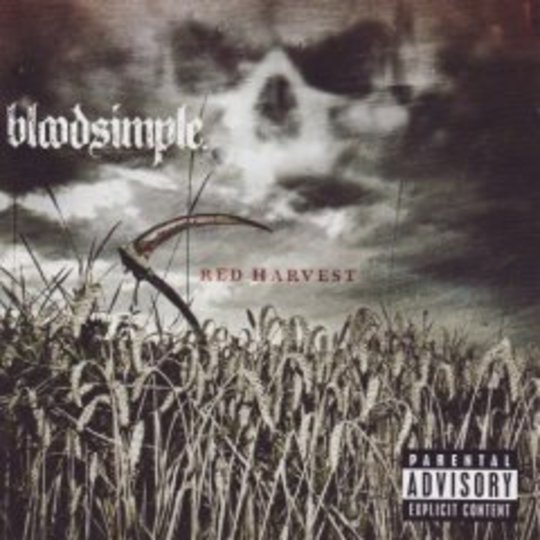 It takes a special type of band to make an album quite so spectacularly bad as this, because this isn’t simply a collection of bad music – it’s fundamentally rotten to its core. Theoretically, Bloodsimple shouldn’t be a bad band – any group containing former members of the almost ludicrously good Vision Of Disorder is going to be automatically assumed to be at least not bad, and if you’ve got someone out of Mastodon’s brother on bass then surely there’s at least going to be some quality control?

Red Harvest is a stunning achievement because it catalogues exactly what is wrong with so many bands nowadays. And it’s not simply a question of genre; this writer fucking loves metal and all (well, most) its latent offshoots. The problem is that Bloodsimple have aimed fairly high – their press release blurb notes that one song apparently sounds like Metallica fronted by Phil Anselmo – but failed so spectacularly in creating anything that sounds even remotely interesting that the whole album is a sloppy, flaccid turd of an affair, limply pushing itself onwards through 11 tracks of turgid groove-metal with its sights set firmly on, say, touring with Avenged Sevenfold so they can sell vast amounts of overpriced merch to fashioncore victims whose conception of quality metal starts and ends with Atreyu. Which is what they’re doing at time of writing.

Ladies and Gentleman, meet the Kooks of metal.

We’ll run through the Bad Metal checklist, shall we? Overwrought, simplistic lyrical metaphors with pretensions of depth? “Out there on the side of the road there was a snake / This snake had eyes of fire and fangs from another world… but he was selling something / He was selling devotion, he was selling dreams, he was selling lifestyles / And I said, ‘Sure man, what you got? / I’m interested in anything that’s gonna get me off’”. Gosh, the snake-as-evil metaphor. I could be wrong but about six thousand years ago that was in vogue, wasn’t it? So that’s a tick. How about identikit riffs, growled vocals that flip from singing to screaming as the ‘emotional content’ dictates? Definite tick. Now how’s about some hideously clichéd lyrics about family dysfunction that seem clearly aimed at cashing in on the lucrative Divorce Dollar? Try these: “He walked on down the hall / and he came to a door / And He looked inside / ‘Father?’ ‘Yes son?’ ‘I want to kill you… and mother / I want to fuck you for what you put me through’”. You know, I’m going to tick that box as well.

Fuck it, this album is worthless. I’ve listened to it three times, so that’s two-and-a-quarter hours of my life I’m not getting back. Plus this review took me about half an hour. I’m invoicing Bloodsimple for my time because, frankly, if they ain’t paying you to listen to this execrable dog shit then it’s really not worth wasting your time over. Just fuck off.