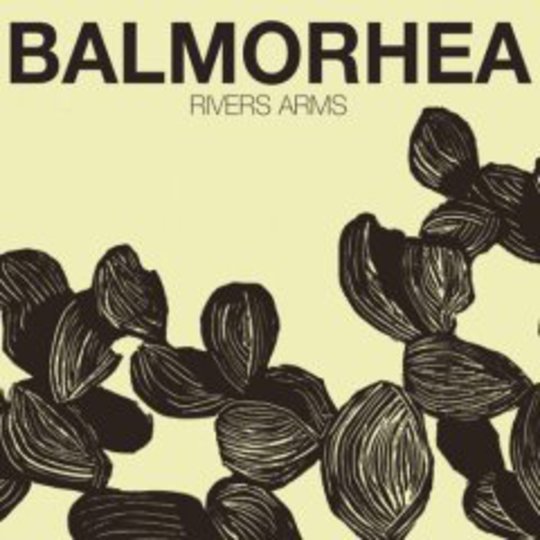 Y'know those days when everything you do goes spectacularly wrong? Where the tiniest movement triggers an avalanche of disaster and the best intended words offset a storm-shower of tears? Well, Balmorhea’s second full LP Rivers Arms was made for such occasions. Granted, it’s never going to alleviate the numerous catastrophes you've ignited during that intermitting 15-hour period between head and pillow, but it’ll help massage the anxieties invoked by the despising looks and disparaging remarks darted your direction ever since stepping into the office.

Pronounced ‘Bal-moor-ay’, the Texan duo of Rob Lowe and Michael Muller have composed a tranquil, glistening affair brimming with organic instrumentation and bereft of any focus-slipping lyricism. It’s a record perfect for solitary moments of personal confinement; one that takes you beyond the strains of modern living and out onto an ocean of spacious melodies through a tightly structured raft of soothing guitar lilts and understanding keys that seep through massaging endeavours like ‘Theme No.1’ and, the equally gliding, ‘Limmat’.

Such a collection of reclined, hand-holding canters allows the listener to delve in and out on a whim without ever tiring of the intricately arranged back drops of cello and rustic violin. However there’s no escaping it, Rivers Arms is essentially mood music not suited to the requirements of everyday listening but that’s of little detriment to the beautiful compositions lying await here. Because sometimes, just sometimes, we all need a record like this; a record that blows ‘Barefoot Pilgrims’’ mournful piano lament into withered bones and rejuvenates downbeat hearts with the ascending acoustica and hymnal humming of ‘San Solomon’.

Understated in its production, each track plays out as a counselling session for the weary, dispensing affecting and emotionally rousing imagery like medication for flagging, defeated mindsets. Over the course of an hour it’s perhaps too sentimental and reflective to deem truly essential but then I suspect that’s not really the point of Rivers Arms. It’s a pacifying accomplice for a night of red-wine soaked relaxation that helps forget the pressures of working life. And when the shit hits the fan, as it invariably will, it’s reassuring to know you’ve always got Balmorhea to come home to.