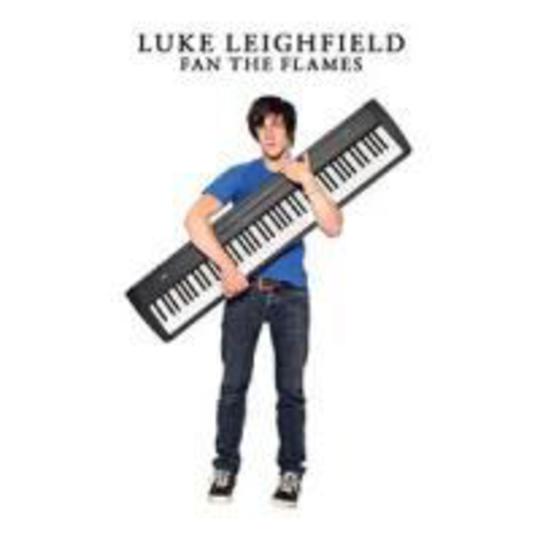 Luke Leighfield, it's really hard to like you. You are the sort of artist whose fans are likely to be dismissive and unbearably militant and defensive when they're told that you're actually not all that good. You've got a lot going for you, though. You're a talented young man, but you rely so unbearably heavily on your influences and the assumption from most people that you're quite unique among your contemporaries (who you sweetly thank in the liner notes) that it's difficult to be more motivated about singing your limited praises.

It's not the intention to be hurtful, it's actually necessary. And fear not, this review will revert to an indirect description instead of a direct appraisal soon enough. Hard stuff first, evidence in a minute. And a change of perspective. Fan The Flames contains no little skill and cheek, but it's the kind of skill and cheek that would have been inventive had some of the most skilful, cheeky, respected, famous and inventive names in popular music had been taking the same flight and been flown into a wall. As a work, it has no regard for authenticity of expression, inventiveness of arrangement (outside of the artist's immediate peers, anyhow) or anything that resembles a truly memorable tune. And that is very, very important to this sort of record.

Belle & Sebastian, Brian Wilson, Paul McCartney, Kate Nash, The Delgados, Hefner, David Gedge, Camera Obscura, Teenage Fanclub and Neutral Milk Hotel… is how a list of artists who render Luke Leighfield pointless might begin. While that's an extremely crude and childish way to make a point, it is difficult to care when you hear a lyric like “my lyrics are simple, you know what I mean / nothing's clouded in metaphor so you're looking straight at me” delivered with such idiocy and naivety. And the “clouded” simile is pretty close anyway. Are you scared they won't crack your code, Luke? Naivety itself is not a bad thing at all, but when it's delivered with such a smart-arse hint that Leighfield actually could, if he wanted, deliver much more complex lines, it becomes utterly disgusting. Naivety only works when it's genuine, not when you let on that you know you're cleverer than that. Arrogance rather than innocence is what we're given.

What the press release claims is 'extravagant' instrumentation should more accurately be labelled 'functional'. No subtlety further than extreme volume and extreme quiet is employed, and the instrumental arrangements themselves are terribly simplistic. Most people make the mistake of assuming the genius of Pet Sounds (another crude example to serve a simple point, please stay with it) lies within the range of instrumentation, but it really resides in the way that Brian Wilson used his instruments to give life to his already inventive chord progressions. Conversely and, again, crudely, the arrangements of Fan The Flames could be described as the 'you can't polish a turd' maxim. The turd of his leaden base material is by no means redeemed by the cleansing wipe of equally leaden extraneous instrumentation. It's all ineffective, self-referential suspensions and held strings over basslines dreamt up in the cotton fields of the Great Depression.

Already, too many words have been written about this record. Have three points, and only because a lot of wasted effort went into recording it. Join a band and play someone else's songs, Luke Leighfield.