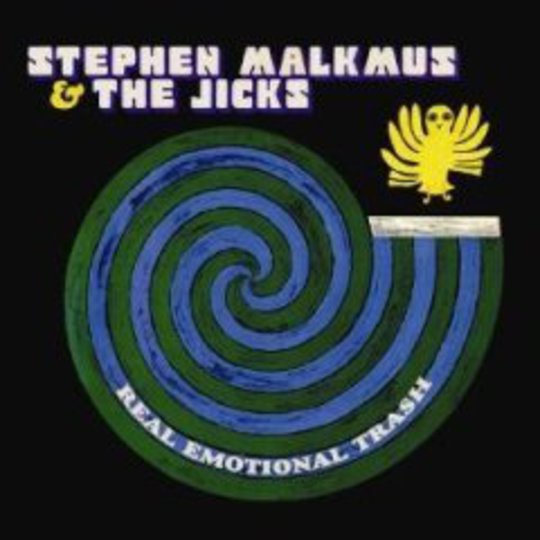 Whereas more than a few contemporaries have managed to start afresh, Stephen Malkmus will forever be linked to the double-edged sword of Pavement’s legacy. Virtually every respectable publication printing an indie ‘Best Of’ list will include Slanted & Enchanted and its follow-up_ Crooked Rain, Crooked Rain_, and probably only eschews the other albums as to avoid the impropriety of being biased. In that context, it’s almost forgivable if Malkmus’ post-Pavement projects were mired in self-doubt and grandiose statement-making indulgences. Thankfully, that is not in keeping with his laidback nature.

On his fourth full-length since_ Terror Twilight_ marked the (permanent?) hiatus of Pavement, the Jicks’ return is promptly apparent after being a noticeably absent contributing factor to the eclectic aesthetics of 2005’s excellent Face The Truth. Former Sleater-Kinney drummer Janet Weiss solidly anchors Real Emotional Trash with pronounced beats and suitably subdued fills on an album meant to showcase Malkmus’ meandering guitar jams. Although there is little doubt who is running this operation, the Jicks finally sound like a real band in synch with their leader. Nevertheless, I can’t help but wonder how much better this album might have been with Scott Kannberg’s personality in the studio to play traffic cop to Malkmus’ opposing tendencies of chaos and calm. Mr Malkmus and his Jicks

Polished production and an ironing out of the music’s creases creates a less-relaxed feel than we’re used to hearing, but there’s also a sense of warmth which was largely missing from the previous Jicks-aided album, Pig Lib. The sprawling ten-minute title track comes as close to maudlin as Malkmus has ever been, but he can’t hold the thought for long before the tempo picks up, jubilant keyboards tempering a sleazy bassline and his falsetto optimistically shifting the mood. It’ll likely bring many of you to fondly remember Wowee Zowee’s ‘Grounded’. If perhaps not quite matching that song’s opulence and bombast, the confidence of Real Emotional Trash proves nearly as irresistible. While it’d be exaggerating madness to assert that Malkmus’ song craft has greatly improved since his early days, it would be equally unfair to suggest his work hasn’t been aging gracefully.

In his unique lyrical fashion, Malkmus muses the endless possibilities of disenfranchised characters (‘Hopscotch Willie’, ‘Wicked Wanda’) straddling the line of comedy and tragedy from the whimsical perspective of an observer who’s been there, done that. On ‘Dragonfly Pie’ he plaintively affirms in his zany sing-song voice, “Can’t be what you ought to be / Gotta be what you want to be” which would have fit nicely aside his slacker mantras from Pavement’s early days, before devolving into a stream-of-consciousness rambling – “Shake me off the knife / Because I want to go home” – breakdown. It’s an irritating habit but at the same time it’s what makes Malkmus, erm, Malkmus, and not some run of the mill Stone Temple Pilots derivative he at once admires and fears if the lyrics to ‘Range Life’ are meant to be taken seriously. So effective is this methodology that it’s only upon repeated plays that you realise how closely he adheres to traditional verse/chorus/verse song structures.

The sheer veneer of monochromatic guitars on Real Emotional Trash at times feels transparent without the playful twists and explosions of sound which made Pavement one of the all time great bands, but it is almost superfluous to compare the two phases of Malkmus’ career in this way. Even if the man himself doesn’t seem to mind. Okay, it’s not Pavement. Get over it. It’s Stephen Malkmus and the Jicks, and be advised: this dad still rocks.