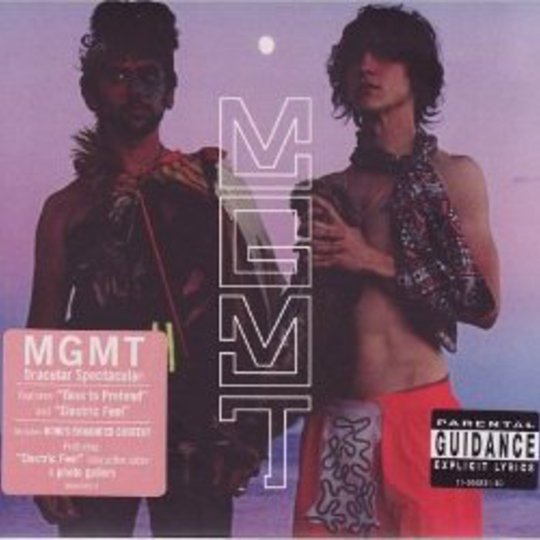 Proof indeed that just because your album title rhymes, doesn’t mean it can’t be true as well. Especially in regards to the third definition, such is the inherent emotional mystery that relies at the heart of this debut by Brooklyn duo Ben Goldwasser and Andrew VanWyngarden.

Oracular Spectacular_ is a fine record. A blissful blend of gurgling psychedelia, proggy synth and acid-fried ‘70s west coast hippiness, it’s as playful, uplifting and involving a record as you’d hope to hear this early into the year. What it doesn’t do though, is assure you that this is an essential album that demands long-term replays and loving care.

At times on their debut* MGMT *hit some very high peaks. Opener ‘Time To Pretend’, with its tweeting synths and clattering drums, tells the oh-so droll tale of their desire to "live fast and die young", declaring the best route to take: "I’ll go to Paris shoot some heroin and fuck with the stars." All delivered, of course, with dripping irony. It’s a brilliant opener, and over its course sits somewhere between a euphoric centre point to a night out and the cold, clammy comedown fear that sits on your brain immediately afterwards. ‘Weekend Wars’ is similarly epic in scope, sounding like pimped-out electro country, or Gram Parsons wearing Perry Farrell's best furs. ‘Electric Feel’ is more traditional filtered pop-house fare, but no worse for it, and 'Kids' repeats the tricks of ‘Time to Pretend’, pushing the same buttons and achieving a similar high level of electro-pop nirvana.

But – and it’s a bigger but(t) than even Sir Mix-a-lot might be able to endorse – despite the oodles of enjoyment to be had, the clever tasteful genre switching and master-craftsmen blending of sounds and styles, it’s hard to locate a beating heart at the centre of it. There’s a persistent worry, or perhaps lingering resentment, that this is a cold, calculated record, made by a sonic experimentalist rather than someone utilising an array of sounds to express a range of multihued emotions. While, for example, ‘Of Moons, Birds & Monsters’ is a beautiful and autumnal-like Floyd meets the Mamas and Papas through the looking glass effort, its immense charms feel only paper thin. Then there’s the whiskey balladry of ‘Pieces of What’: while it initially feels like an A-grade piece of Exile...-era Jagger, it never ultimately transports you into his head or heart.

All of which doesn’t stop Oracular Spectacular from being a blissful 40 minutes of high-end stereophonic joy, but it does severely hamper the listener from imbuing their own emotions back into it. Of course, not all good records require this, but certainly the best ones do.

Given time and a couple of more albums, MGMT may distill all that is good about them into something a little more honest and human – something which may be quite a thing to hear. Until then, they can capture our heads and our smiles, but the hunt for our souls proves fruitless.