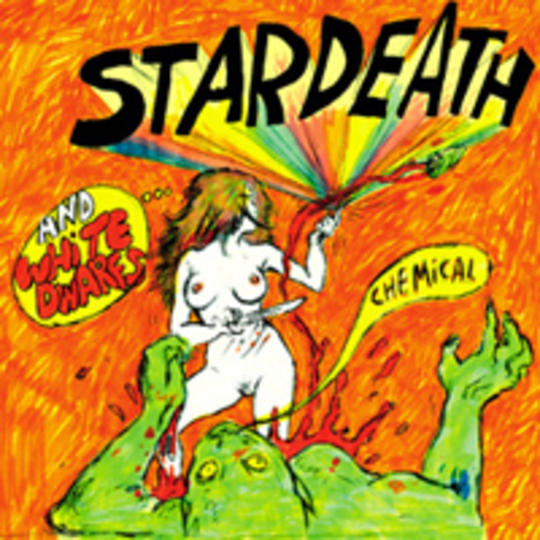 It’s unsettling, given the posture of Half Machine Records’ admittedly small back catalogue, that the imprint’s latest release should be a cover of a song originally recorded by a Beegees side-project. If anything, this version of '_Toast & Marmalade for Tea' sounds even more desperate for a hug than Tin Tin's; arms out, the track that opens the debut UK release from Stardeath & White Dwarfs totters like a snot-besieged small-brain struggling to communicate with its carer, sated only when it’s gathered up for a ride on a shoulder to the garden section of B&Q.

Ah, press release – Dennis Coyne was sired by uncle Wayne’s brother? Who also did the artwork? That opening paragraph could have made so much more sense. No matter – the trio have been making music in Oklahoma City since 2004 and if the first of two A sides sounds like them trying to reclaim parentage and cause a rift in the family then the second forgets all that as fickle as puberty, rejecting Flaming Lips/Clangers pop for the misanthropic tendencies that characterise Half Machine’s output so far (MIT, Theoretical Girl). Opening with a lonely ESG-esque bass lope, whispering voices team with proto-punk guitar scratch to haunt ‘Chemical’, which climaxes in a premature mess of banjo strings and sated panting.

As an introduction to Stardeath & White Dwarfs this EP attempts to give us a potted life story when a simple “hello” would have sufficed, but what eventually arrives here is neat and tidy enough to hold attentions long enough for the taste of marmalade to disappear.

Fire In The Disco present... at Bar None!, Nottingham, Fri 01 Feb