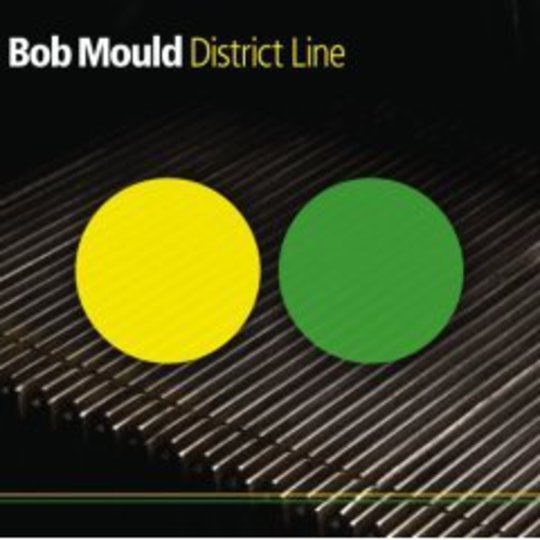 One thing about growing old after being a legend (or the nearest approximation of what is and isn’t a legend) is that the opportunities to relax artistically become legion. Bob Mould used to be in Husker Dü and Brendan Canty used to be in a bunch of chancers that went by the name of Fugazi and, while District Line sounds undeniably like a man taking his foot off the gas and making the music that only he wants to hear – would he have made it so resolutely pop if he was trying to capture the zeitgeist? – it’s nevertheless a solid if unspectacular collection.

And, perhaps unsurprisingly, District Line’s closest musical touchstone in Mould’s own canon is the alterna-rock behemoth Sugar rather than the Huskers. There’s a distinct absence of anything heavier than the odd crashing guitar chorus and the emphasis is on the songs themselves rather than the idea that this is an album operating as part of a movement or scene and, as he sings on centrepiece ‘Return To Dust’, “Growing old, it’s hard to be an angry young man”. But that’s not strictly true – while Mould’s not going to make another Zen Arcade he still seems pretty pissed off with the world, the only difference is that his world is far removed from that of his past. Domestic issues dominate District Line and, while it’s initially a touch disquieting to hear a 47-year-old still singing about shitty relationships, it eventually becomes more comforting: hell, if girls/boys remain mystical creatures of befuddlement this late in life then we shouldn’t feel bad about being in a mess in our mid-20s, yeah? Maybe.

“I’m glad things worked out for you but you’re only fooling yourself if you think you won’t do it again and again / My biggest mistake was taking you back again and again” sings Mould on, er, ‘Again And Again’. Whether he’s talking about personal or professional relationships is unclear, but the yearning in his cracking voice as he approaches the chorus proves indisputably that this guy’s still got it – what could have been a plodding, formulaic AOR rock standard is pushed over the edge by force of personality. Oh, and a brilliantly lazy guitar solo. And opener ‘Stupid Now’ begins with “Please listen to me / And don’t disagree,” as if he’s far too weary for another conflict. On paper it feels like it’s far too middle-of-the-road (it’s about as musically challenging as working out how to play G and then D on a guitar) but somehow, as Mould’s vocals swirl around the backing of the effortlessly melodic riffs, it mutates into something approaching a real belter, complete with a middle-eight that is so lean as to be custom-built for the world’s stadia. You can't escape the feeling of wanting Canty to just open the valves and force matters into overdrive, but he never does.

‘Old Highs New Lows’ is a poorly executed misfire, handicapped by an over-reliance on airy effects and a frankly lazy approach while ‘Shelter Me’ sounds like Mould’s just discovered synthesizers and wants to make a song that could soundtrack some embarrassing disco sequence in a shitty B-movie. Much better – and bolder – is the six-minute closer ‘Walls In Time, a stripped-back affair consisting of a warm cello, Bob and his acoustic guitar. Despite its length it’s intimate rather than bloated – “We all want to make a mark somewhere” he sings hoarsely, and it’s the summation of the entire album.

Despite his glorious past there’s something comforting about Mould still having to make music this personal, and while District Line is by no means a classic, it’s a decent addition to the catalogue of a man who could’ve lived out the rest of his days without lifting another finger. Good thing he had itchy feet, then.