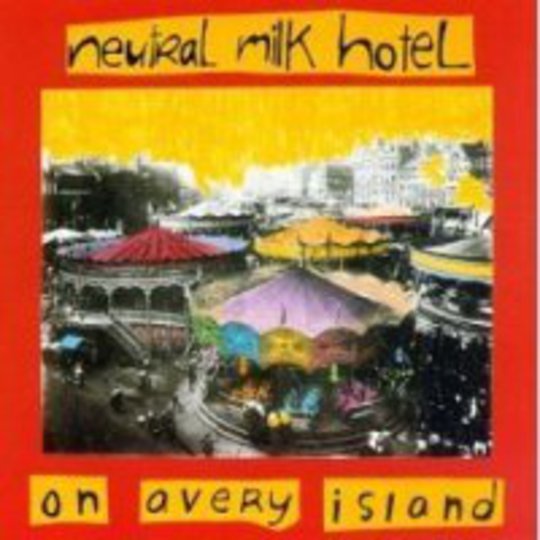 From the official website: “Jeff has been working on a collection of short stories. He also just joined the circus and wants to make a movie about snails.”

The latter’s a joke, no doubt, but it’s a barbed one all the same, acknowledging a weight of expectation surrounding Neutral Milk Hotel that has not lifted since the release of their second and final opus, In The Aeroplane Over The Sea, in 1997.

That record’s begun its inexorable journey into the rock canon now, garlanded retrospectively by critics and fans alike as one of the best of all time, but for devotees frustrated by the band’s ongoing hiatus it’s to the past and On Avery Island they’ve had to look, and it's a remarkable work that tells an intriguing story of its own.

To contextualise: Neutral Milk Hotel were the crowning achievement of the Elephant 6 Recording Company collective, a motley crew of like-minded musicians largely based around Athens, Georgia sharing a love of ‘60s pop, folk, noise and Syd Barrett’s influential brand of cracked psychedelia.

Essentially the solo project of enigmatic singer-songwriter Jeff Mangum, the band’s history can be traced through noise rock beginnings in Mangum’s LA hometown onto transitional incarnations featuring soon-to-be members of The Apples (In Stereo; Robert Schneider) and The Olivia Tremor Control (Bill Doss), before finally settling on the four-piece line-up that spawned a masterpiece in Aeroplane.

On the face of it at least, On Avery Island is a shakily-executed solo venture, an electrified ramble intermittently backed by a loose-knit collective including Schneider, Lisa Janssen (bass) and Rick Benjamin (trombone).

But if musically the record is as crude a vehicle for Mangum’s poetic smarts as Bob Dylan’s early electric forays were for his own precocious harangues, lyrically its aim is unnervingly true.

For all that, On Avery Island’s principal joy is that it confirms absolutely its successor’s mastery. Like William Blake with a dirty mouth, Mangum’s a flaming visionary, the opacity of his verse outweighed by the sheer visceral force of his grotesque repertoire of images, rendered with fever-dream intensity.

His words are arguably as pungent and profound as anything produced by Dylan in his ‘60s pomp, but here they’re necessarily diminished in scope: Mangum’s oeuvre stops wells short of social critique, and while On Avery Island finds his modus operandi as a writer largely established, it would take the bizarre conceptual framework of Anne Frank’s diaries for history’s insensible march to impinge on his highly personal vision, and to devastating effect.

On Avery Island also lacks the soaring moments of clarity that punctuate its more distinguished younger sibling. It’s a record as bewildering as it is bewildered, stumbling around in the red mist of a sensual plane encompassing both a prepubescent horror of and fascination with sex, locating all the contradictions of human existence within loaded images like “Blistering Pree, all smiling and swollen / makes babies to breathe / with their hearts hanging out over the sheets / as soft as beets in some brown dresser drawer” (‘Baby Pree’). I’ve ended the quote there for brevity’s sake, but Mangum’s not finished; imagery spooling uncontrollably out with the unravelling horror of a schoolgirl that’s discovered her first period.

“Too much information,” comes the inevitable riposte, but NMH are all about shining a light on the dark recesses of the sexual id, inhabiting a world that teems with images of venality, physical corruption and barely concealed castration fantasy (seriously, check out ‘Where You’ll Find Me Now’).

While his peers nailed their childlike colours to the wall as a declaration of aloofness from mainstream society, Mangum uses the standpoint of threatened innocence as a trope for what might loosely be defined as a religious quest; an attempt to reconcile the baseness of man with his sense of wonder at the world.

Desire is understood as both corrupting force and as the most basic expression of our incompleteness, which helps explain Mangum’s uncanny knack for making even the grossest of lines sound unbearably poignant: “I don’t wish to taste of your insides / or to call out your name through my phone / for the glory boys at your bedside will love you / as long as you’re something to own.”

If there’s a single major flaw to be had with On Avery Island, it’s that Mangum doesn’t always succeed in communicating the urgency of his vision. The agitated fog of distortion that permeates barely rouses Mangum’s voice above an injured whine, which gets you to wishing he’d holler himself hoarse like on Aeroplane. Likewise the bleeding-fingertip strum of that record is largely absent, although the excellent ‘Baby Pree’ gets closest to nailing both these traits.

Other standouts on an album that’s musically solid but fairly forgettable include the sad-sack tumble of ‘Song Against Sex’, greatly assisted by Benjamin’s queasy fills of trombone, and the affecting vocal melody evidenced on ‘Gardenhead/Leave Me Alone’.

To return briefly to the Dylan analogy, perhaps On Avery Island is best thought of as NMH’s Another Side Of, an embryonic record (to use a Mangum-esque image) that points the way to greatness while stopping short of that accolade itself. With the reissue including two bonus tracks comprising the early ‘Everything Is’ single, this is an essential document of a band whose time came inexplicably too soon. Probably.