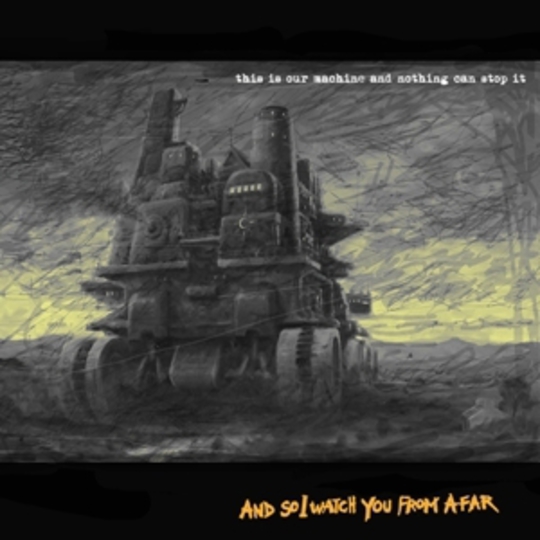 Defiance, ambition: the twin barrels of endeavour that can turn bands into more than a bunch of guys playing some instruments. With enough defiance and self-belief a promising young band can block out the hype and the hangers-on so that their vision is what prevails through their development and none of the “Well, we liked your first EP but don’t you think you should try this?” fakery that comes from the non-believers thinking they know better. And ambition; what’s wrong with wanting to create music that can only be done justice if it pounds out of a PA that could make a herd of elephants spontaneously shit itself? Nothing, that’s what.

So Northern Ireland’s And So I Watch You From Afar make their bid for immortality with this astonishingly ambitious mini album/EP. It’s fair to say that they wear their influences on their sleeves – a bit of Explosions In The Sky’s ethereal grace here, some of Pelican’s jaw-shattering riffage there, a dash of Mono’s dynamics over the top – but, thankfully, while they’re very much a product of listening to other bands This Is Our Machine… doesn’t sound as derivative as it might otherwise. But first, the bad news. The Eastern minor chord frippery of ‘The Machine (Part 2)’ feels like a musical composition for an A Level class that needs to demonstrate outside influences rather than a coherent track. When the thudding riff drops it does partially pull things back from the brink and the whirling, chaotic second half that seems to build and build until it combusts like an exploding light bulb, but it’s simply not as fluid and natural as the rest of the album.

Take ‘WPB, 6am’, for example. Even though it’s easy to identify Those Who Tell The Truth…-era EITS as the primary influence, the metronomic snare and guitar forever spiralling away into the distance turn it from being a simple facsimile of something that’s already been done before into a real beast that, rather than being under three minutes long, could echo on for quarter of an hour before really losing steam. Opener ‘I Capture Castles’ manages to marry reverb-drenched guitars with a pummelling rhythm section that colours the entire album, giving it a real depth to the sound that immediately marks And So I Watch… out as a band that knows that they’re doing. During the breakdown of ‘I Capture Castles’ there’s no moment when you’re only hearing one end of the sonic spectrum – the bass is ever-present, so they’re not resorting to easy sound dynamics tricks to create tension – and the full-bodied ‘The Voiceless’ really hammers home the point – these chaps can write songs.

It’s not the finished product by any means, but it’s not hard to imagine And So I Watch… doing something rather special with themselves in a year or so. Until then, let’s have slightly less of the EITS influence and more of their own ideas, because they demonstrate that they’ve got ‘em by the proverbial bucketload.