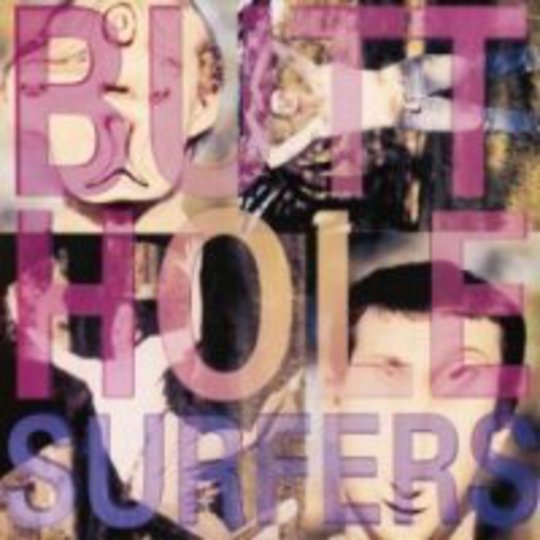 Oh what a difference nearly two decades makes. Texan psychedelic hardcore overlords the Butthole Surfers - once held in the same amount of esteem as Sonic Youth, Big Black and Dinosaur Jr - first reached the height of their powers with_ Locust Abortion Technician_ in 1987. All of the promise of the live shows - often featuring pyromania, surgery film shows, seizure inducing strobes and vomit inducing volume - and previous output was condensed onto a disc that was more warped than any that had previously been released. They hit a plateau with the heavier and more narcotic_ Hairway To Steven _a year later and it seemed like the unthinkable was about to happen: one of the world’s most unbroadcastable bands were about to become hit makers.

The first hint of the new direction was a Peel Session broadcast during the August of 1989 containing a song that may or may not have been called ‘Booze Tobacco Dope Pussy Cars’ (on a personal level, the excitement this caused saw a friend crash our car on the motorway en route to our first Reading Festival – where the highlight of the weekend would be the Buttholes). It was a rambunctious, almost industrial take on punk and a lot of the tar-heavy heroin psychedelia of Stairway… had been stripped away. Here the canny use of drum machines and electronics to beef up the Texan hardcore sound pointed the way forward to Gibby Haynes’ inclusion on Ministry’s_ ‘Jesus Built My Hotrod’_. Elsewhere _‘Bong Song’ _should be as daft as the Cypress Hill style samples it uses, but it all adds to a sensuous post rock flavour.

On the album proper (initially released in 1991 on Rough Trade) what sounded like unnecessary sheen back in the day has proved to be something of a bonus now. Far from sounding like some kind of shiny sell out, tracks like_ ‘Revolution’ _come on as overwhelming as nearly anything else they’ve recorded. It’s a bugged-out hippy jam that slowly transforms into a colossal stoner romp with Paul Leary’s warmly overdriven guitar, psych keyboards, police sirens, phones ringing and the loon Haynes chanting Gary Shandling’s name (TV’s Larry Sanders).

Their straight-up cover of Donovan’s ‘Hurdy Gurdy Man’ _was at once brilliant but also signalled the end, including as it did a shuffling hip-hop beat that would be resurrected for the weak _‘Pepper’ – their biggest hit. An early track ‘Something’ is resurrected in the style of the JaMC’s ‘Never Understand’ but perhaps the standout is their homage to Sonic Youth, ‘P.S.Y.’. It ends as their albums nearly always do, on a bad acid trip freak-out, ‘Barking Dogs’, which is the sound of synapses misfiring, shot gun blasts and canine growls of anger as Leary lets rip beautifully losing all hold on melody, cohesion and sanity.

Nostalgia, for the most part, is a very bad thing, and it’s literally years since even I’ve listened to this record but it’s amazing how good it sounds now and (stupid songs about bulldogs aside) it makes you realise just how much the double whammy of grunge and Britpop changed things. The former certainly swept a lot of hair metal garbage out of the way but took some of the best out-there music with it as well, as alt rock became easier and easier to digest. And this, of course, is ironic given how they were one of Cobain’s favourite bands (he spent time in rehab with Haynes for heroin dependency shortly before killing himself). After this album the Buttholes still had some fuel left in the tank but this was to be their last truly exhilarating and unhinged slice of punk rock psychedelia before their tribute act, The Flaming Lips, stepped into the void, the band themselves created by untrammelled drug use and mental health problems. But for now let’s be thankful that we have these reissues of one of the great ‘lost’ bands of alternative rock.