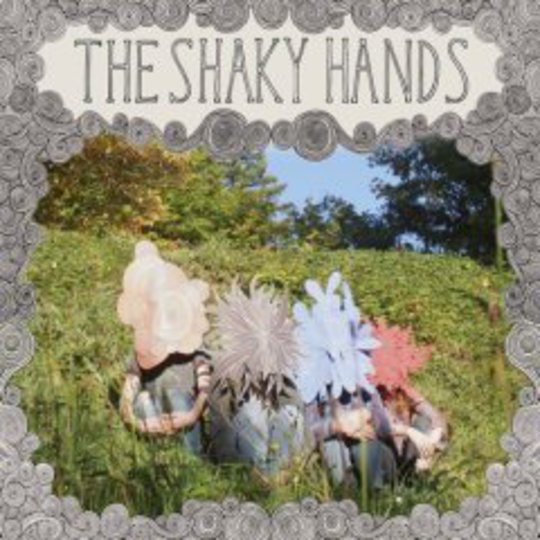 Hangovers are nae fun when your late 20s kick in. Those youthful late nights of inebriated hedonism followed by a mild mid-afternoon temple tingling are long gone. Instead, us coffin-dodging 30-pushers have to endure an all-day deluge of crippling cranium palpitations and unsolicited gland seepage whilst cowering in front of a 'work station' praying your baw-jawed colleague doesn't catch a whiff of the reeking, caustic fumes emitting from every aching pore. But when that smarmy jobsworth finally plucks up the courage to make some disparaging remark at the expense of your sluggish booze-ravaged disposition you have no retort; every muster of energy is firmly focused on quelling the spasmodic jitters of your trembling extremities.

In more than just name, Portland quintet The Shaky Hands expertly convey this dilapidated state of morning afterness. Their self-titled debut LP is an antsy spiral of rink-a-dink melody and stuttering rhythm that, with an uncoordinated shuffling of feet, perches between the shattered glass goblets of Mountain Goats and The Decemberists’ prickly pop gems. Streaming light into bleary pupils with opener ’Whales Sing’’s soul-infused bassline, frontman Nick Delffs’ affected, withering scales stick to the eardrums with the heavenly comfort of a drool-smothered pillow as the track’s blustered percussion and sharp guitar jinks infiltrate the mind like an energising dose of aural Berocca.

This feverous wake-up call quickly subsides as ’The Sleepless’’ tentative paean teeters and trips to a bobbling disarray of drum-fumbles and peaky chords before ascending into the creaky, country quirk of ’Why & How Come’. And it’s such spirited dedication to shambling on-the-brink tunefulness that transcends this record into the realms of understated grower. Where lesser-abled vagabonds would baulk at the prospect of injecting messy acoustic arrangements with a soiree of swivelling keys and butterscotch harmonies, The Shaky Hands simply thrive; whistling carefree to the scuffling jingles of ’Sunburns’’ giddy simplicity and ’Summer Life’’s hand-clapping sprite.

Even when an insidious edge wafts its way into ’Hold It Up’’s stern-faced, Clap Your Hands–like demeanour, the group’s earthly gleam shines bright; retaining the record’s chaotic approach to structure amidst an unholy séance of deranged howls, trapezing strums and frazzling percussion. In cobbling together this daze of woozy acoustica and grin-bearing pop fidgets, The Shaky Hands have created an accomplished, triumphant debut that soothes, stimulates and arouses with its wealth of contagious melodies – a revitalising cure for any beer-weary hangover.