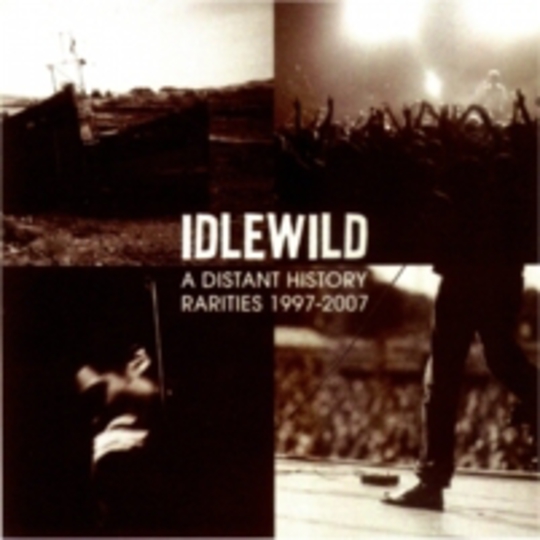 I’m just going to put this out there – despite their initial excellence, Idlewild have disappointed me for the past few years.

I’m not saying that I expected them to forever stay true to their punky roots and refuse to move on, but they could have at least stayed interesting rather than hopping aboard the HMS MOR by the time album three arrived, especially after they nailed their ‘grown-up’ sound as early as 2000 with ‘Let Me Sleep (Next To The Mirror)’. Sadly, in the next seven years and three fairly insipid albums, I found only three songs which I thought were any cop, and one of those was a b-side.

For all my disappointment in the present, though, I’ll take any chance to look back to their golden past, and whilst the recent best-of Scottish Fiction (reviewed right here) might not have offered the average Idlewild fan anything they didn’t already have in their collection, rarities compilation A Distant History probably will. It even includes the earliest of the early stuff, as first singles ‘Queen of the Troubled Teens’ and ‘Chandelier’ are present, correct and a fine example of Idlewild’s oft-admired Captain-era breakneck punk sound, where lo-fi chaos generally reigned but melody (and the occasionally harmony line) was never far away and always welcome around Roddy’s for tea.

Thee oldene dayse are further represented at the hands of ‘Self-Healer’, ‘90s b-side ‘I Want To Be A Writer’ and a couple of others, including a particularly disorganised alternate live version of Hope Is Important’s ‘You Don’t Have The Heart’. With that out of the way, it should be time to let the album drift off into a sea of increasingly dire b-sides from the ninth single from the fourth album, and so on, but it doesn’t really happen that way.

That’s not to say A Distant History doesn’t have its undeniably dull moments - it really does, from the overblown piano and strings-accompanied acoustic version of ‘El Capitan’ to the ‘American English’-style, borderline-Travis anthemic dirge of ‘Poor Thing’ and three or four others at the Warnings/Promises part of the album, all of which sound like they were written at a higher, more interesting tempo only to be cut back when it came to the recording session and end up particularly stagnant – but for the most part it holds its own adequately. ‘I Was Made To Think It’ and ‘Gone Too Long’ are prime examples of the kind of hook-based rock stuff that made 100 Broken Windows so enthralling, though neither are from that era – both that album and Hope Is Important are sorely under-represented in this collection, numbering only three tracks between them – whilst Gang of Four cover ‘I Found That Essence Rare’ finds them in their finest edgy pop-rock form for a personal highlight.

Naturally it’s not perfect, being as it is a record full of off-cuts, and whether three hard-to-find nuggets nestled alongside 15 b-sides and a couple of mini-album tracks even counts as ‘rarities’ is your own choice, but A Distant History is good regardless. Say it quietly, but it might even do a better job than its recent (bigger) sibling.

Oh, and that b-side that I liked? 'No Generation' isn't even on here.