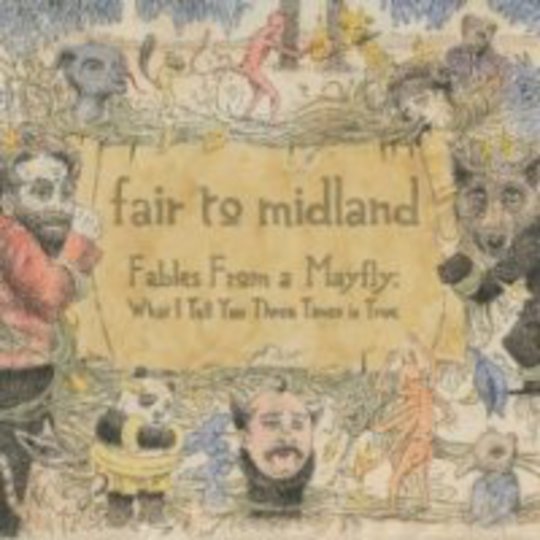 Hailing from Dallas, Texas, Fair to Midland’s recent history sounds like a heavy metal rags to riches tale. In 2006, after years of touring their home state and releasing two independent records, the band were spotted by System of a Down frontman Serj Tankian at a gig and were quickly signed to his label, Serjical Strike.

One quickly released EP later and the band have now come up with their debut LP, Fables from a Mayfly: What I Tell You Three Times is True, a record heavily indebted to the likes of Tool, bits of Mars Volta and apparently some type of unidentifiable prog-influenced art rock. Fair to Midland specialise in quickly alternating from the chugga-chugga of grinding guitars and growling vocals to ‘spacey’ guitars and soaring, high-pitched vocals that just so happen to fall on the wrong side of US mainstream alternative chart rock. And all of this happens within the space of every single song.

In theory this sounds reminiscent of the kind of musical extremes that made System of a Down such an eyebrow raiser when they first appeared in a pre-Strokes landscape filled with bores like Limp Bizkit. But while that lot showed off a manic energy and oddball song structures, Fair to Midland merely beat a tired formula into submission until everything collapses into an uninspired heap. Songs like lead single_ ‘Dance of the Manatee’ bleed directly into the likes of ‘Kyla Cries Cologne’_, with only the sounds of tinkling ivory keys to separate the two. It’s a trick that’s repeated over and over again.

Some out there are trying to claim this quintet are about to take their place next to the likes of so called metal greats like Tool. But if _Fables from a Mayfly _is meant to be their ticket into the heavy alt-rock VIP room, they might want to have another think, because they won’t even get past the front door with these eleven songs.