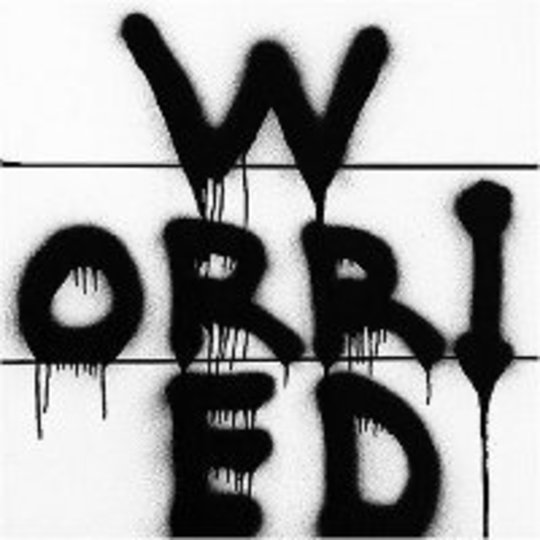 A recent interview conducted by DiS’s very own Samuel Strang (linkage) revealed that David Shrigley did not consider his absurdist doodlings to be particularly funny. Now the ache in your sides might beg to differ, but you get his point: everyone’s a quirky individualist these days, but few can do dark with such painful insight as the Glasgow-based artist, perhaps best known for his illustrations in The Guardian’s Weekend Magazine and an acclaimed music video for Blur’s ‘Good Song’.

On Worried Noodles, a compilation of songs based around a set of lyrics penned by Shrigley, the most obvious pratfall facing contributors would be to accentuate the quirky elements of the words at the expense of their more serious elements. Thankfully the pull exerted by Shrigley’s dark star seems to have attracted a shrewd cast of operators, and all the tracks here are worth putting into orbit on your record player at least once.

Obvious temptations aside, Shrigley’s verbal transgressions must be something of a joy to work with, offering as they do if not exactly a blank canvas, then at least a certain inscrutability that leaves them wide open to interpretation. In the event, it’s largely a confounding mix of deadpan and latent melancholy that prevails over the album’s 39-track sprawl. Artists like Deerhoof and Dirty Projectors find a natural sparring partner in Shrigley’s words and give full rein to their disjointed meanderings, the former’s ‘You, Dog aka Kidz Are So Small’ already having appeared on this year’s Friend Opportunity.

For all the artists using Worried Noodles as a chance to let their hair down – Franz Ferdinand’s ‘No_’ sounds grungey and devolved, Liars’ techno take on ‘Panic Button’ is pretty unremarkable – there are plenty who have attempted to flesh out his vision with interesting results. Grizzly Bear craft an improbable epic from the slightest of source material in ‘Blackcurrant Jam’, while David Byrne turns in a Rufus Wainwright-esque music hall gem in ‘For You_’.

TV On The Radio’s doo-wop rendition of ‘Sweet Potato’ falls in the sketchier camp but nails nicely one of Shrigley’s trademarks nonetheless; namely, that moment when his seemingly innocuous ramblings topple over into malevolence and senseless violence: “Sweet potato / I’m gonna eat you”. It’s left to Munch Munch to sound like TV On The Radio normally do with ‘Squirrel’, while on a more rhythmic note Phil Elverum and Nick Kgrovich sound like they’re taking cues from Timbaland on ‘Watcha Doin’’, and Trans Am lay down an epically filthy groove on ‘The Film’.

By its very nature Worried Noodles is something of a rag-tag collection, but it’s also a consistently fresh and engaging one, and if nothing else it’s worth parting with your money for solely for the privilege of spending time in such rarefied company.