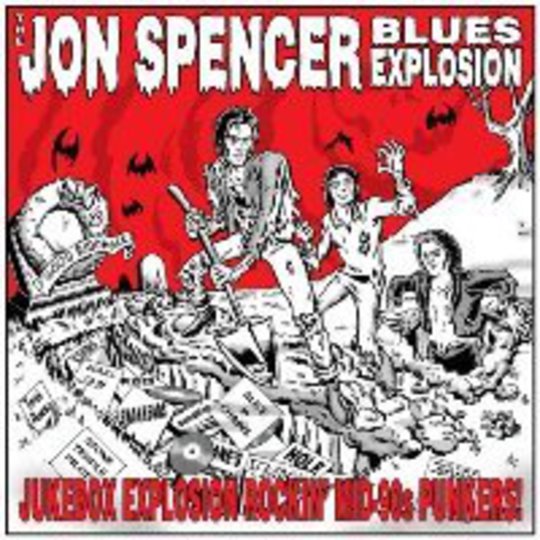 Why is it so many of rock ‘n’ roll’s flame-keepers are such avowed necrophiles? There’s a direct lineage that can be traced between the feckless death trips of Iggy & The Stooges, The Cramps’ zombified rockabilly, the malignant leer of The Birthday Party and self-professed “rockin’ mid-‘90s punkers” The Jon Spencer Blues Explosion.

On one level, death is implicit in any consideration of rock ‘n’ roll as a moment which came to pass on the eve of America’s moral implosion – JFK’s assassination, Vietnam, civil rights et al – and its leading proponent’s corporeal expansion. Elvis’ plummet from grace was a nation’s, and his bloated image still exerts a sinister fascination years after the event.

But rock ‘n’ roll is intrinsically a moribund creature; a fatal intermingling of innocence and lust, and the ultimate sex ‘n’ death vehicle for anti-intellectuals like Iggy, Cave and Spencer. Unlike the college rockers Blues Explosion famously claimed to despise, rock ‘n’ roll wasn’t exactly plagued by metaphysical doubt; it had only one thing on its mind and didn’t mind rolling around in the gutter to get it.

Jukebox Explosion gathers releases from Blues Explosion’s Jukebox Single Series along with outtakes and rarities from across their 17-year career, and although the quality of the playing is undeniable, at eighteen songs long it feels like stretching it a bit for a band whose palette consists of varying shades of dirt.

But let’s linger a while on the music, because it works it spell on your attentions with feral intensity; a ferocious mix of stray-cat skronk and numbskull blues riffage - 'Shirt Jac' sounds like gratuitous CPR being administered to Jerry Lee Lewis’ crumbling remains, 'Son Of Sam' is terse and corrosive, the foul-mouthed ‘Caroline’ is just as heavy as anything Jack White ever conjured, and twice as nimble.

But Blues Explosion are rocking on a bellyful of bile and not much else; bound by no great artistic vision here beyond a simple yearning for a return to a visceral music long since hijacked by art college dropouts and humanities students with their average degrees (hello mum!). Trouble is, for all their back-to-basics hubris, Blues Explosion are exactly that: an art rock project, and as such, they were doomed from the outset.

It’s a problem summed up by the inclusion as a bonus track of ‘I Am Tupac’, the sole nod to the band's sometime fascination with hip-hop. It’s as if Spencer envies rappers a certain freedom which has long ceased to be an option for rockers; the capacity for nihilism without affect, for unmediated pleasure in self-expression, which as an essentially post-modern artefact Blues Explosion lack.

On the cover of Jukebox Explosion, the band is pictured digging the graves of assorted despised college rock bands. They should pause to consider whether they’re digging their own.