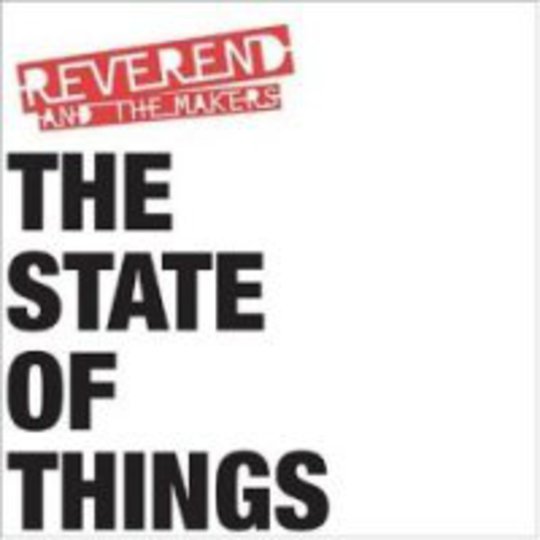 _“The fucking pubs are fucking dull

The fucking clubs are fucking full

Of fucking girls and fucking guys

With fucking murder in their eyes

A fucking bloke is fucking stabbed

Waiting for a fucking cab

You fucking stay at fucking home

Keep the fucking racket down

This is fucking chicken town.”_

Yep, Britain’s shit alright. The Enemy tell us today, John Cooper Clarke told us in 1979, John McClure AKA The* Reverend is here to tell us some more. Tracksuits, STDs, conveyor belt careers, Saturday night, Sunday morning, get a trade, away from here. It’s been said umpteen times but here is the same message again, for the hundredth time this year, in the form of Sheffield don McClure and his Makers*. Intrinsically linked with the Sheffield scene that brought us Bromheads Jacket, Arctic Monkeys and Milburn, The Reverend was spoken of in hushed tones: a maestro, a poet, a visionary and all things in between. Turning down massive record deals during the height of the media hype post the Monkeys’ success in early 2006, McClure has bided his time before releasing his own brand of social realism on the British public he so acutely monitors. It has done him no harm, as whilst a host of bandwagon jumpers have slipped back below the Boardwalk McClure takes his place as one of the biggest new bands around, cleverly exploiting the ‘mentor’ reputation has allowed him to look less like a wannabe and more like a trend setter. It’s a shame, then, that debut LP The State Of Things is lyrically obvious and musically dated.

You kinda get the impression that The Reverend thinks of himself as a cross between Dylan, Cooper Clarke and Mike Skinner; he sees things as they happen, he isn’t taking the piss but neither is he a part of it. He simply floats above it all, noting down lines to rhyme together. In reality, though, the lyrics are more akin to a sixth-form poetry social at an Oasis gig. “While some sore heads will rue last nights endeavours, make Sundays vow that they won’t get so leathered” from the album’s title track is a prime example of the stunningly trite and unnecessary insights McClure offers us into the mind of the average man. A few naïve words are usually nothing too offensive (unless you are Jim Davidson), but what really rankles is McClure’s attitude that somehow what he is saying is Important, and that Everyone Should Listen.

In terms of pompous, up-your-own-arse preaching, this takes some beating.

It’s well known that Reverend McClure and Arctic Monkeys go way back: lyrical jostling, support slots and probably some kissing. So it’s no surprise that Alex Turner pops up on this album. What_ is surprising is that it’s on the second track. I mean, come on… at least leave us hanging for a bit. Having said that, ‘The Machine’ _is not terrible. Okay, so it’s an ode to the nine-to-five slog over some electronic beats that sound achingly out of date, but its incessant chant of a chorus and fast-paced tempo give the album a nice boost. _‘Bandits’, however, is back to the same old stuff as the beginning. Unless there is a subtext I am missing, it is genuinely a song about one-armed gambling addiction and its effects on a man’s life. It’s like hearing Vera Duckworth spitting rhymes.

‘18-30’ is as bloated, red and drunk as you can imagine. “Je suis Anglais, I stay in bed 'til midday. Smash up a hotel room, it’s OK.” So apparently the awful boors who go on package deals to Magaluf are in some way below those of us who don’t. McClure’s sarcastic tones and high-and-mighty judging is pretty offensive when you think about it. The song also meets a weird middle ground of current musical trends, in that there will be indie kids laughing along and the white van man singing along thinking,_ “That’s just how it is”_. Both are being taken for fools.

The biggest problem with The State Of Things is that it is simply not as clever as it makes out. McClure’s lyrics are clichéd, the beats and music beyond simple and uninspiring. Where it aspires to be outspoken, erudite and rapier-like, it sounds clunky and passé. One suspects that McClure is the guy in the beret and Che Guevara T-shirt you avoid on a night out. As bad as the likes of The Enemy and The Twang are, at least they are spouting their guff from the heart, trying to escape the rat race. The Reverend, meanwhile, looks in on the rat race and utters,_ “Urgh, look at them, don’t they all look dirty”. This public-observation style of songwriting has hit a wall, and there is really very little else to be said that can sound fresh. Certainly destined to go top five in the charts, and to be milked for singles and tours, The State Of Things_ will no doubt be a big hit. But if anyone ever takes the time to give it a good proper listen they will find that it’s a wafer thin album of posturing and poor word play.