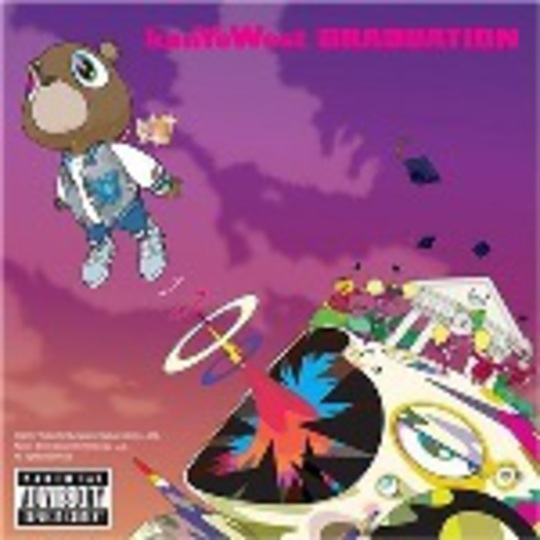 The race for the prize hasn’t been fought between two less likeable parties since 1996, when cripple-loathing God-botherer Glenn Hoddle went heads-up with Howard Wilkinson to see who’d become the new England team manager. But this tussle right here is for something a little more prestigious than the right to shout “Man on” at Ray Parlour: we’re talking about the battle for the hearts and minds of the hip-hop mainstream, the contest to become the #1 figure in rap.

In one corner, dancing like a man suffering from PTSD in the video to ‘Ayo Technology’ and prepping to drop the album Curtis, it’s 50 Cent. And in the other corner, three CDs deep and still persisting with that furry-friendly cover art motif, it’s Kanye West.

They’ve gone to the effort of clearly defining the roles of ‘goodie’ and ‘baddie’ to help push their (clearly manufactured and utterly non-existant) feud over these two albums. Fiddy loves the latter role: doesn’t matter if you’re a family rights lobbyist on the right, an anti-gun campaigner on the left, or a member of Dipset: he’s here to fuck up your day hardcore, then roll-up on magazine covers dead in the middle of the Don Imus fallout proudly boasting,_ “I’ll take all of the blame for hip-hop”_.

Kanye wants to wear the white cowboy hat though. He’s the good guy! He just wants to be your friend. You like old school hip-hop, right? So does he: he’s hanging out with KRS-One and Rakim. You like the emo? He has Fall Out Boy on speed dial. You like your rap conscious? He’s working with Common. You prefer that gun-slanging talk? Lil Weezy turns up on this album. You like the idea of a society where the fluke of birth doesn’t determine your access to life-saving materials? He’s on the telly calling out Dubbya over Hurricane Katrina. You, alternately, think that rich white people are superior beings to the proletariat, and that the latter should be taxed so the former can live lives of easy luxury; he’s at the Diana Memorial Concert to let you know he agrees. Kanye Just Wants To Be Liked.

Which is a massive irony, because he’s easily the least likeable rapper currently recording, and not just because of those fucking sunglasses. The man’s ‘issues’ with women don’t really help, a triumphant progress from ghostwriting lyrics defending date rape for Ludacris, to ‘Gold Digger’, to recent single ‘Stronger’’s adolescently heel-kicking “I’ll do anything for a blonde dyke / And she’ll do anything for the limelight”. On ‘Drunk and Hot Girls’, he even appears to be on some Joe Francis shit.

I blame the parents myself. Remember ‘Juicy’? Notorious BIG track, on hip-hop radio every now and then, “It was all a dream / I used to read Word Up magazine”. That one. Great song, right? It’s got great form as well: Biggie sets himself up as this rich, successful, boastful figure (even if what he’s boasting about is having a mobile phone, a barbecue, and a SNES), but lets you know that he came from the struggle, and his materialism is tied down into having nothing as a child. There’s a song on Graduation which is basically Kanye doing his own ‘Juicy’, his own “my childhood and where it gets me know” tune. It’s called ‘Champion’, and in it Kanye alludes to a rough childhood... and then goes on and mentions that every school year his parents brought him a brand new wardrobe of clothes at the start of the autumn term. In his mind, that’s how you create the vision of the underdog, by letting the people know that you didn’t have to rock your elder brother’s Dunlops to Year 6 English.

But, yes, bitching about the boy West’s personality is self-defeating. When he works (tracks like ‘Gold Digger’, ‘Through the Wire’, heck even ‘Stronger’ to a point) he works as a ‘useful asshole’, an all-purpose contemptible figure that still knows his way around a beat, still knows how to put a song together, still knows how to make those hits. At heart, he’s still a producer not a rapper (which explains how badly he hits the mic at times, more on that later). He’s got that hit-making part down pat... it’s just that he can’t make good hits anymore.

Take ‘Homecoming’, featuring Chris Martin on vocals, a surf-shack piano-based tune that is desperately missing Jack Johnson and a 23-year-old girl called Joanna telling you how amazing scuba-diving in Mauritius is. Or ‘Drunk and Hot Girls’, which drags Mos Def out of whatever retirement home he’s been staying in to burble incoherently for five minutes. ‘The Glory’ gives you the feeling of being trapped in a horror movie as Dilated Peoples’ zombies slowly make their way to the corner of the room you’re hiding in. Even ‘Barry Bonds’, his hook-up with hip-hop’s currently most dick-sucked Lil Wayne, comes across as rushed as mixtape album filler, amped up to let you know that, despite spending most of his interview time alternatively crying over what awards he hasn’t won and praising Brandon Flowers’s moustache, he’s still got his ear to the hip-hop world.

Annoyingly though, then there’s a track like ‘Can’t Tell Me Nothing’, produced by DJ Toomp (who previous beatmade TI’s ‘What You Know’). It’s an amazing instrumental, as dark and gloomy as Gothic architecture, with dub-hop vocals from Australian vocalist Connie Mitchell, and these elements put together basically make it sound like some kind of fantasyland version of Big Dada. And Kanye’s fine on it, pissing and moaning like he always does, and never let it be said that he can’t glide on a track when need be, but... “I know that Jesus died for us / But I couldn’t tell you who this side was / So I parallel double-parked that motherfucker sideways / Old folks talking ‘Back in my day’”.

So, wait a minute... excessive need to point out familiarity with all genres, even if you’re incapable of combining them all into your music: check. Non-sensical, “sounds OK until you analyse them” lyrics: check. Seemingly nice ‘n’ healthy liberal pop star who eventually reveals himself to have some pretty fucked-up political views: check. Slow realisation on the critics’ minds that we’ve been praising some utter shit for half a decade: check. Oh snap, Kanye’s the new Beck and this is his Midnite Vultures. Five years’ time, tool up like Ralph Wiggum and prepare to say_ “I can’t believe I used to go out with you” _every time he walks past.