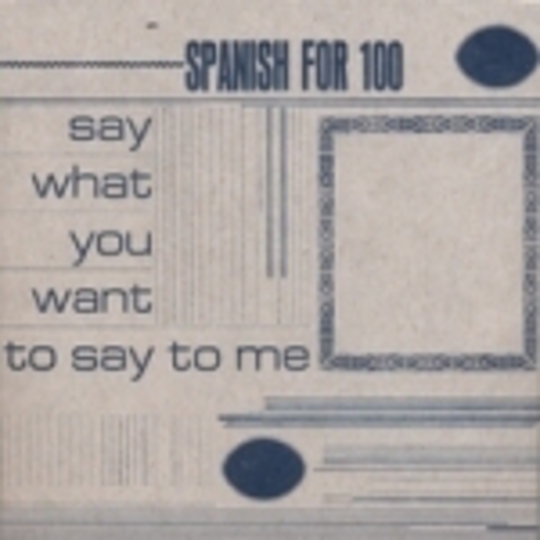 In the coming weeks, maybe months, you may hear the name Spanish For 100 being thrown around in the same way as that of Arcade Fire was a couple years ago. Not that there are too many parallels to be drawn sonically, more that there is an air of excitement around the release of this album that has, seemingly, come out of nowhere, from a band hardly mentioned outside of the US.

Say What You Want To Say To Me is an album of surprising depth and constant quality. The title track's endless guitar pirouettes and hopeful vocal harmonies bring to mind Nada Surf and even Biffy Clyro, whilst the slow-burning 'See Now' and 'Red' are filled with the same nervous energy as Aereogramme's late-era meditative offerings.

Yet these changes don't make the album seem pockmarked, nor do they make for uneasy listening. Spanish For 100 have mastered all these elements and, just about, created a sound of their own; a sound somewhere between the just-off-MOR college rock of their home country and the indie-rock of UK underground stalwarts such as Jetplane Landing and Hundred Reasons. Yet for 75 per cent of the time they operate at quite a distance a way from either of these touchstones. Perhaps not surprisingly for a band so eager to juxtapose their collective, and individual, influences, there is a confident attitude throughout the album, but there is no sign of an ego anywhere; vocalist Aaron Starkey shies away from self-referencing, despite writing in the first person. The band – thankfully - avoid stepping into muso territory.

Whilst this is by no means an all-time classic album, it is hard to find a fault with _Say What You Want To Say To Me that’s really worth focusing upon. Be sure to check them out before the inevitable waves of widespread critical adulation thrust them into the limelight.