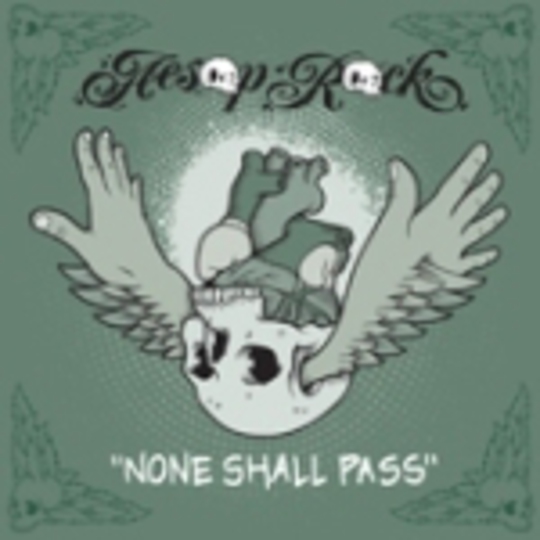 No bravado necessary. With carousel chiming away contentedly Aesop Rock initially seems to have made a somewhat underwhelming return, but that’s never a safe bet where this artist is concerned. Fairground samples amid rants that our protagonist “shall rejoice in your fall from grace” aren't renowned chart-bothering traits. Slowly, though, it chips away. Complete with the finest rasping rodent vocals since ‘Leyendecker’ whined away on Mirrored at the turn of the year, suddenly 'None Shall Pass' picks up steam: a subtle compulsive showpiece for the Long Island emcee's forthcoming long-player of the same title, his first since '03.

Often in the past (particularly with Bazooka Tooth) Aesop's production credentials have been dented by his habit of being too detailed, with a particular penchant for placing wet-fingered jazz licks all over the shoppe. 'None Shall Pass' comes close to such pitfalls, providing a horrid hollow Chicane-aping riff on the pre-chorus. Aesop is at his best when he keeps it simple, and most of this track is reflective of that. Sparse and brutal, looping compulsively, it goes some way to provide the respectable dose of convention and anticon innovation that his recently released and wholly underwhelming Nike+ effort failed to. Nutshell: everything here bodes well for Aesop's fifth record proper.

None Shall Pass EPK
Log-in to rate this record out of 10
Share on
Love DiS? Become a Patron of the site here »