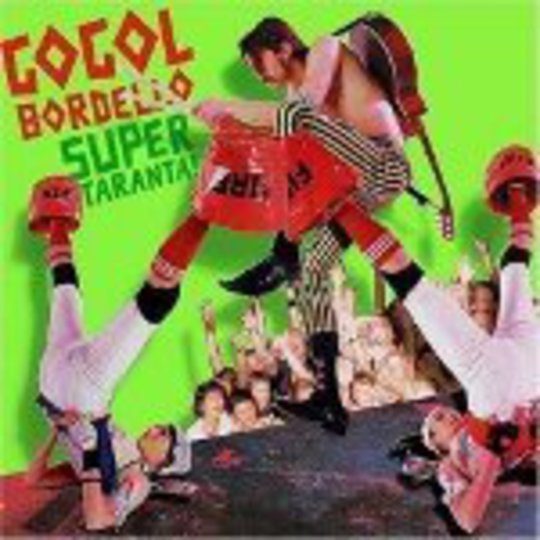 Frankly, I’m not prepared to forgive Gogol Bordello for their stint at Live Earth. We Scots are a proud bunch y’see and, to us, shunning T In The Park’s monolithic ned-fest in favour of cavorting with a haggard eighties/nineties/noughties-pop wench is tantamount to pissing putrid acid over our nation’s luscious green pastures. Yeah, Eugene Hütz’s rag-tag troupe of gypsy-punk ‘rebels’ may have attained unparalleled global exposure but, seriously, what kind of self-respecting - supposedly alternative - outfit chooses a stadium rammed with comatose Black-Eyed-Diddy-Patrol luddites over Balado’s Buckfast-fuelled pandemonium?

So, with my heart palpitating to a raging beat of contempt, I begin to explore the New York-based ensemble’s fourth LP Super Taranta! and almost instantly a gleeful sense of retribution fills my soul when Hütz’s torturous Ukrainian holler projects from album opener ‘Ultimate’. Accompanied by a blizzard of oxygen-cutting guitar and tussling strings, it’s impossible to take his inane warbling with anything but a fistful of salt as he comically babbles_ “there are never any good old days, they are today, they are tomorrow” _like some bitter vodka-soused geriatric.

But as one listen transcends into five… six... seven, a strange awestruck sensation washes over me. Because beyond Hütz’s maniacal wail lies a bed of musicianship so textured, so emotionally captivating, it entraps you with the alluring gaze of an Eastern-block temptress under a blanket of silky unrestrained rhythm. My seething cynicism rapidly wilts to this frenzied stupor of side-stepping accordion and rabid fiddles whilst constant fizzing drum-kicks ferociously penetrate my aching cranium. It seems I’m no longer able to deny these incessant aural advances and even when I escape from the salacious clutches of ‘My Strange Uncles From Abroad’, I’m snatched back mercilessly by ‘American Wedding’’s star-spangled shit-kicking gusto.

Admittedly, the group’s gypsy guise seems capricious amidst the record’s genre-jaunting sheen – ranging from Sandinista-era Clash grooves (‘Dub The Frequencies’) to sun-setting Latino-roots-folk (‘Alcohol’) – but a simmering sense of outsider politics still lurks ardently throughout every blood-lusting track. So much so, even Hütz’s cat-strangled rambling begins to nuzzle into my conscience as he preaches about society’s misgivings with the unhinged certainty of an indecipherable tankard-swilling miscreant.

Yet this is what’s most perplexing about THAT Live Earth appearance: for a band teetering on the brink of frantic sonic eruption, they appeared all too eager to embrace the corporate cock-sucking of mainstream banality - and for that, Gogol Bordello lost my respect. Super Taranta! may let me forget but in my heart, I know, I can never forgive.