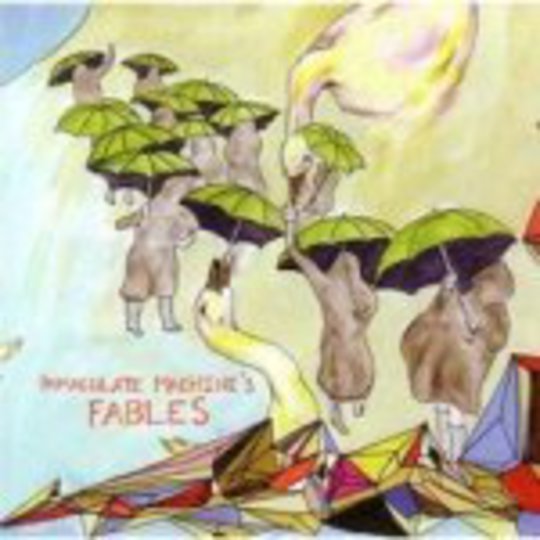 The church bell rings, the fable begins. On one side of the story stands an idealistic, glossy-eyed optimist. You know: the one who thinks that despite the world coming to a fiery end, all is a-okay. On the other side stands a sarcastic, somewhat sadistic and cynical soul; beaten and tattered by a world she once had some sort of faith in. They meet in an open square for a debate, eyes exchanging deepening glares while their minds are elsewhere, wondering what went wrong in their adversary. The resulting conversation, a flawed discussion, flirts with brilliance but never quite gets there. Instead, both parties remain so set in their ways that they blind their minds to the truth, that is, that there is another opinion out there that is different from theirs, animate or inanimate.

This fabricated exchange I describe above may or may not have been a topic of discussion or inspiration when Immaculate Machine penned their own fable, this set of ten tracks spilling over with quasi-mysticism, incandescent imagery and songs about humans resembling, symbolically speaking, motionless stones. Yet, like a conversation between two polar opposites, most of the songs on Fables, the Victoria, Canada trio’s fourth album, fail to grasp the point in their search for an answer to their ultimate question. Some musical queries come close, very close – including the brilliant ‘Roman Statues’, which rolls through winding stringy hills supplied by Owen Pallett and Michael Olsen, and ‘C’Mon Sea Legs’, a gritty, anti-pop ballad eerily echoing with musical saws and haunting synth nodes that accomplishes everything in three minutes that most charting singles fail at. But all in all, the reasoning for constructing this fable remains blurry, if there was ever one at all.

In their last three efforts, especially their Mint Records’ debut Ones and Zeros from 2005, Immaculate Machine sounded angry, bitchy even. Each song was a meticulously constructed call-to-arms, set to punchy guitar riffs and sarcastic lyrics haranguing everything from pretension to cropped hair. Possibly in the search for deeper and darker metaphors hidden amidst the rocks, Fables mostly avoids such criticism in its earnest quest for greater answers. When it never finds anything metaphorically spellbinding, Fables suffers; it becomes a difficult, almost perplexing listen. Both ‘Small Talk’ and ‘Old Flame’, the former buttressed by more string arrangements from Pallett and Olsen, are like this. They flirt with what makes Immaculate Machine bloody brilliant – three-part vocal harmonies, plaintive but effective guitar jabs, keyboard strokes and jazzy percussion – but without the licentious delivery, and much like the two butting heads in my fable above, all ends in confusion. Such is life.

There is some good stuff here. ‘Nothing Ever Happens’ could have easily found its way on an older album, as both its title, melodic structure and vocals emote slyness and sarcasm via witty, somewhat inebriated commentary fuelled on purpose, while opener ‘Jarhand’, minus the negligible and somewhat needless background vocals from both The Cribs and Alex Kapranos, is assertive, especially when it speaks of the evils of blind ignorance in its opening lines: “Always want what you don’t understand / one hand in the jar and a jar on the hand.” Still, Fables in its entirety lacks fabled status; questions posed from the rock perspective are too abstract, becoming as transparent as kitchen wrap. The cohesion needed to enhance this record above the trio’s past achievements is just not here, and despite_ Fables _encapsulating a few very good moments, fabled even, both sides of the argument fail to compute, leaving the situation stalemated and the questions posed unanswered.