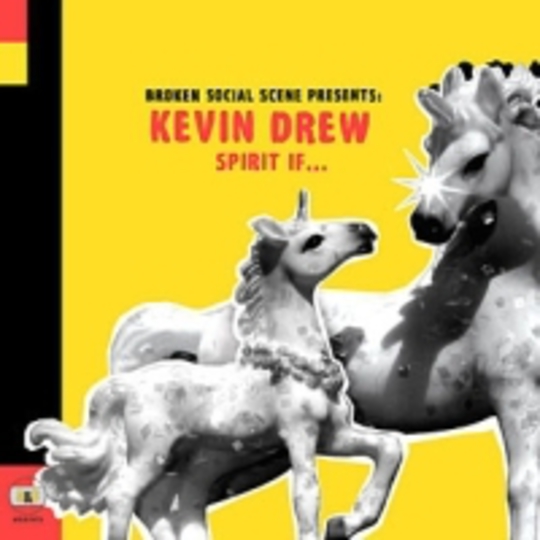 I know what you’re thinking. You’ve probably already posted it online._ “Yeah, but it’s no You Forgot It In People.”_ Thing is, I’m not convinced you listened to Spirit If… before you made that decision.

I’ll concede the comparison is fair because even without the ‘Broken Social Scene presents…’ it’s obvious this isn’t a case of a Kevin Drew solo project of ill-advised genre hopping. As principle songwriter for the band it’s simply an album showcasing Drew’s tunes, but still very much a BSS record (along with a few ‘outsiders’). And, for the time being, we’ll have to conclude Drew is the Donald Fagan - and Brendan Canning that other guy - of the Steely Dan collective, if you’ll forgive the awkward metaphor. As the next Broken Social Scene album is scheduled to highlight Canning’s abilities, I reserve the right to be wrong. And I hope I am.

‘Farewell to the Pressure Kids’ opens the album and is the only track which would have worked on BSS’s self-titled album of two years ago, which was basically a brash and brilliantly calculated mess. The production on the remaining tracks heightens the presence of the vocals, and this loss of ambiguity doesn’t harm the overall sensory effect any. If anything it gives us cause to go back and listen to Drew’s previously penned songs for what we missed the first time around. Apparently, his favourite topics are “fucking, fighting, fearing and hope” (FFFH), which coincidentally happen to also be mine. ‘Tbtf’ is a beautiful indie-pop wonder with Drew’s wistful lament of “you are too beautiful... to fuck / you’re too beautiful” segueing into a complete breakdown before the song shakes off the effects of this realisation and fades out. Drew’s penchant for carefully planned profanity may be a deliberate attempt to keep the song off commercial radio, but despite his best efforts he may find himself with a hit record.

Don’t let that fool you, though: BSS haven’t lost their art school ethic. They’ve always somehow managed that perfect balance of eclectic experimentalism and delicious pop hooks and Spirit If… is no exception.

The genius behind Broken Social Scene records lies in the arrangements – I wonder if Brendan Canning has ever met an instrument he doesn’t like. This album flows from lilting violins and dusty xylophones to Justin’s restrained drumming to roaring guitars and never once loses its continuity – I’ve listened to it all day and I still have no idea how the band managed that. Heavily strummed acoustic guitars and a snare drum on ‘Safety_ Bricks’ give way to a keyboard riff which fades in and out of the song at precisely the right moments. A rollercoaster chord progression is enough to give me a slight case of vertigo on _‘Lucky Ones’, the song most likely to stir Jesus Christ Superstar revivalists into action. ‘Broke Me Up’ uses a Hop-along Cassidy beat and the end result is that we’re surprised by how good it is to be alive. Spirit If… is a celebration of human weaknesses and a realisation that the fun is in the journey itself, not the destination.

‘Gang Bang Suicide’ could’ve easily found its way onto the soundtrack of Little Miss Sunshine _had the movie’s producers had the foresight to wait for it. And if Jackson Pollock paintings required soundtracking, a perfect partner can be found in ‘Big Love’. The vocal spills _“I’ve decided God was no longer in my bed”, and by the end of the line we can hear Drew’s throat contracting. He has always sounded a little bit like J Mascis, and on ‘Backed Out On The…’ his band joins in and trumps Dinosaur Jr. at their own game. (Note: in one of those not-so rare moments where I feel simultaneously brilliant and stupid, I have come to find out J Mascis actually does contribute guitar and vocals to this track.) This is a remarkable collection of songs for so many reasons… I think it’s best I wind down my praise before I begin sounding like a Bible Belt nutjob.

The problem, though it’s not really one at all, is there is so much to digest on a BSS album. Even the cover art deserves a nod: those really are unicorns! I noticed a homemade tattoo unicorn on Patrick Wolf recently, too, so it’s not out of the realm of possibilities to see a ‘70s revival of lava lamps and black lights to hit the indie hipster parade. And that’s not exactly a trivial note, because Spirit If… does come off very much like a modern day Rumours, or even the Mamas and Papas if every song they did was as good as ‘California Dreaming’.

A fitting finale to this pop masterpiece is ‘When It Begins’, a perfect song for the pub when the bartender has already made the last call, or the final stretch of a long summer drive. Or, of course, an encore. Not since Mansun’s Six have I heard an album twist its songs into a musical Lombard Street – and I can already picture the audience screaming its approval in the break – before a wall of static and synthesizers takes us home. And home is a little nicer place to be after taking a ride on Spirit If…