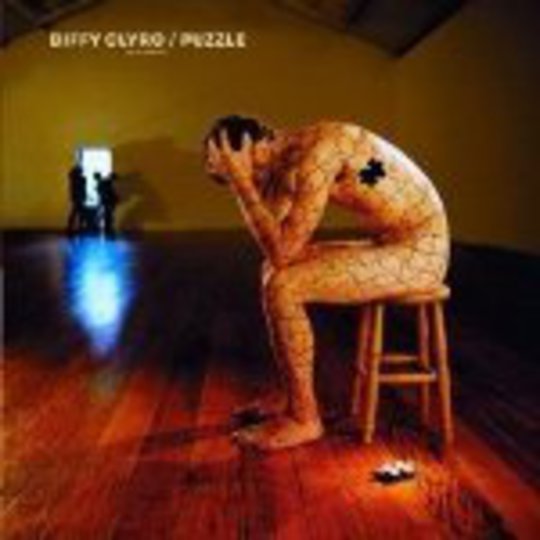 “Take a long hard look at yourself, how did you end up here?” sings Simon Neil on ‘Folding Stars’, and you can almost hear the knives being drawn against them. Since the tail end of 2006 when everyone had their first taste of Puzzle through first single ‘semi-mental’, a fierce debate has raged over the status of Biffy Clyro, and depending on which post in which thread on which forum you read, their fourth album is either their greatest effort yet or a steaming turd of a record made by a bunch of sell-outs.

It's actually neither, although it’s closer to the former. It is a different approach to the previous three long-players though; a pop album, plain and simple, cutting back on the complicated stop-start song structures which have helped them earn their name, and with the screaming ferocity of some of their previous work removed to make way for big dumb chunks of rock. But this is not the sound of a different band altogether, merely the sound of Biffy Clyro simplified, the general feel retained but with a lot of the challenge removed - there's something almost predictable about a lot of Puzzle’s songs, with standard signatures where there might previously have been a few twists and turns.

It's all a little odd for a band who have always maintained an air of unpredictability, but where the songwriting has taken a step towards the simplistic the sound itself has become arena-sized. Opener 'Living Is A Problem Because Everything Dies' begins with a building, spiralling wall of strings, falling away at their peak to leave just the chug of a single, picked guitar note before returning with pounding drums, initially staccato, stabbing at random like bolts of lightening before building up to a second crescendo that again falls away to make way for a sinister choral accompaniment until the vocals kick in.

It’s epic, massive and a little bit The Omen, and it’s a theme which pops up throughout the album. At the conclusion of a couple of the tracks lie two brief piano pieces, ‘2/15ths’ and ‘4/15ths’ – the former set over some faintly-sinister discordant backing noises, the latter twinkling and accompanied by gentle vocals – both leading up to ‘9/15ths’, a pounding, apocalyptic SOS which heralds the return of the choral section. The strings are back, too. Puzzle is the Biffy of old going a bit Muse, and it’s highly impressive.

Or is it Biffy doing campfire-singalong-slash-bed-wetting-indie stadium rock? Some of the songs here are so join-the-dots simple that they’re almost pale with malnourishment. Album closer ‘Machines’ is some inoffensive unplugged strumming whilst ‘The Conversation Is…’ meanwhile… well, we’ll get to that track in a minute. There are some rather naff group vocals in the chorus of ‘A Whole Child Ago’, and ditto for various points in ‘Who’s Got A Match’, which also wins the prize for Puzzle’s least impressive lyric: “The midget is frigid, I put it to you”? What. The. Funk.

There is one point where both old and new styles meet in a bout of sheer confusion. The aforementioned ‘The Conversation Is…’ begins twisting and turning in the verses, but when the easy-on-the-ear choruses hit a second line of vocals appear, gentle and a few octaves higher. It sounds like it was written for them by a particular stadium-rocking, Spiderman-soundtracking indie quintet, and whilst it’s the kind of thing that makes radio pluggers soil themselves with delight, it does sound a little uninspired after a while.

Yet despite the slightly schizophrenic approach, Puzzle remains an above average album, and whilst it might not sound as complete as Infinity Land _- or as good as the other two Biffy long-players - it’ll work well as a crossover album despite its faults. Biffy Clyro have the potential to make a brilliant album full of super-accessible numbers, but this just isn’t it. Where and when Puzzle falls down it’s not because it’s a less taxing album than the others, but because some of the songs simply aren’t what they could be.

If Puzzle was more like its opening track and less like its last, I’d be joining the fanboys in proclaiming this the Best Thing Ever. Instead, I’m almost having to toss a coin to work out whether this review concludes with six little red numbers or seven.

Ultimately, your opinion of Puzzle will boil down to what you wanted from Biffy Clyro in the first place – if you bought their albums but only ever took to the singles, there's a good chance that you'll be as pleased with this as you were with the others. Yet if you appreciated them more for the sheer confusion generated by 'Toys, Toys, Toys, Choke, Toys, Toys, Toys', for their quirky song structures and raw power, this will seem a less fulfilling prospect.