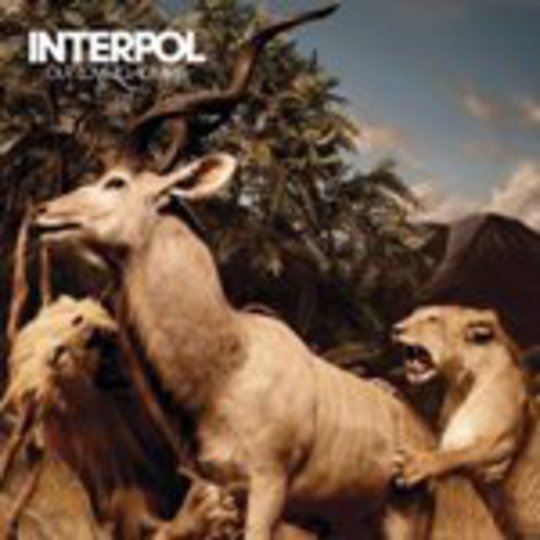 As rulers of the austere and romantic underworld, Interpol’s proficiency in building luscious tension and sublime release has pervaded every one of their songs with devastating effect. Nigh on three years ago we were sat questioning how, exactly, the timelessly brittle post-punk paranoia the band created on 2002’s debut Turn On The Bright Lights could be followed. Follow-up, the broader Antics, was a different album. It turned the dimmer switch on the grim city streets and bleak lifestyles in the Big Apple and mixed stripped-back and funky-as-fuck disco-inspired basslines with clinical percussion and skilful guitar textures. By this point the rock star luxuries were firmly within the bands grasp, and the mystery of the female of the species fixated front man Paul Banks more than ever before. He had fallen in love and, in contrast to the pure despair displayed on the debut, now crooned with maudlin authority. How could the lyric “You make me want to pick up a guitar, and celebrate the myriad ways that I love you” (on ‘Slow Hands’) be forgotten? Likewise, “I am the scavenger between the sheets of union”, from ‘Take You On A Cruise’. The guile Banks displayed in such lyrical content whilst managing to avoid distasteful cliché when put to song was bloody miraculous. And now, with a title like Our Love To Admire, it’s largely business as usual on album number three.

Opening in an almost identical manner to Turn On The Bright Lights’ ‘Untitled’, standout track ‘Pioneer To The Falls’, complete with deft soundscapes and funereal trumpet, sets the experience up to be epic. The brighter and significantly muscular production quality lent to the record by Rich Costey (Muse, Franz Ferdinand) consciously reflects both their recently attained major label status and their importance as the stadium-filling musical force they have become. Rumours of a shift in direction, fuelled by certain member’s own musical side-projects, are ultimately proven to be without foundation here: with the exception of the two closing tracks, ‘Lighthouse’ and ‘Wrecking Ball’, the Interpol sound, style and lyrical themes of old are as potent as ever. But, as before, they’re updated to reflect where the band currently stands in life. Interspersed with that customary melange of romantic advances, Banks now opts for the ‘disillusioned rock star-model’. He’s had enough of the drugs: “I haven’t slept in two days / I’ve bathed in nothing but sweat / And I’ve made hallways scenes for things to regret / My friends they come and the lines they go by” is a lyrical treat on the five-minute-long ‘Rest My Chemistry’. And he’s had enough of the groupies, too: “You don’t have to be wound so tight / Smoking on the balcony / Women you have no self-control / You were known for insatiable needs / I don’t know a thing” he utters on the palatial and melodic ‘Pace Is The Trick’. Fortunately, though, they’ve not gone completely soft, as the rest is made up of crunching riffs and cryptic lyricism (‘The Scale’, for example) with some particularly darker moments to be found on ‘All Fired Up’ (“I dream of you draped in wires and leaning on the breaks”), classically interspersed with Banks’ attempts to convince his lover to spice things up and participate in a little ‘three-way action’. “Baby it’s time we give something new a try / alone we may fight / let us be three tonight” is the key line on the undisputed track title of the year, ‘No I In Threesome’. It’s a weird combination that, thanks to the songwriting skills Interpol continue to display, works.

The biggest development we see Interpol make comes at the end of this collection, where we find a significantly more experimental group take the place of the more ‘classic’ Interpol model. Save for the two final tracks, Our Love To Admire and its two predecessors are often interchangeable, but penultimate track ‘Wreaking Ball’ - a climatic, reverberated voyage - comes complete with reversed vocals and embellished grandeur. Frustratingly, it fades to a close just as the track takes upon a new lease of life as a cinematically orchestral piece, but closer ‘Lighthouse’ finds the New Yorkers at their most symphonic. With giant gyrating reverberated guitars and a grandiose brass section, this is the sound of a rock band attempting the sweeping gallantry of Sibelius or Tchaikovsky and getting away with it. It represents a smugly victorious ending to what is a phenomenally strong and well-polished album.

Interpol have raised the bar once again, something they’re making quite the habit of. The bastards.