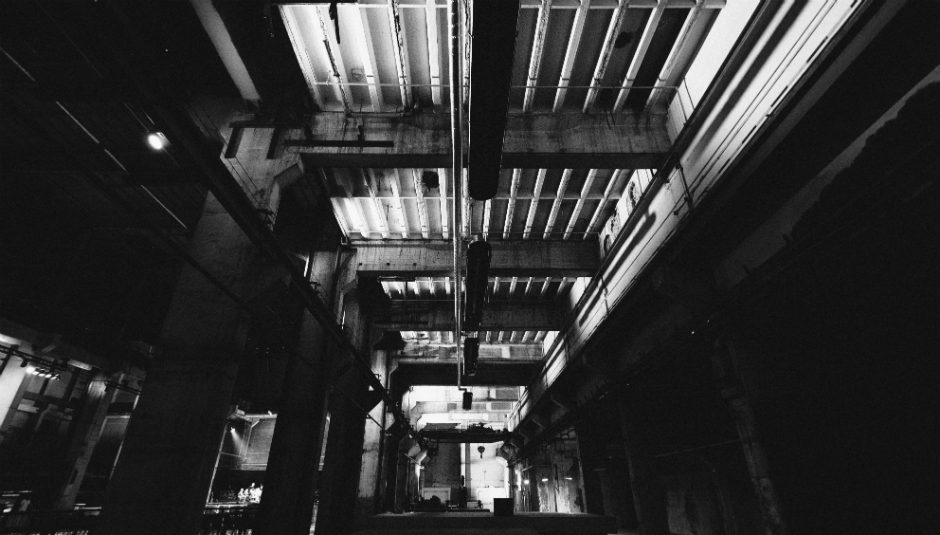 Berlin Atonal Preview - Ones To Watch

Berlin’s reputation as the best place to immerse yourself in techno and experimental electronic music past and present is undisputed. This year DiS will be at the fourth edition of Berlin Atonal, resuscitated in 2013 at Kraftwerk, an abandoned power station in the Berlin-Mitte area. The festival ran from 1982 until 1990 at the SO36 in Kreuzberg (after the fall of the Berlin wall, BA founder Dimitri Hegemann went on to open the legendary techno club Tresor), and hosted performances by pioneer bands such as Psychic TV, Einstürzende Neubauten, Sprung aus den Wolken, Malaria, Notorische Reflexe, Alu, White Russia, Didaktische Einheit, Die Haut, and 808 State just to name a few. Industrial, noise, techno, and electronic music artists found in BA a place to debut innovative projects and foster collaboration, a spirit that lives on in the festival’s latest reincarnation. There’s more than hardcore techno to BA, with a myriad of live DJ sets and world premieres by the best names in the fields of electronic music and the visual arts. Here’s our list of ones to watch playing at this year’s edition, which runs from the 24th to the 28th of August.

Only a year ago Space Age Recordings released the first complete retrospective of Peter Zinovieff’s early electronic music experiments. The British composer is a legendary figure in the field; he collaborated with BBC Radiophonic Workshop affiliates Delia Derbyshire and Brian Hodgson, and most notably founded London’s Electronic Music Studio, where the idea of producing synthesised sounds became reality as early as the 1960s thanks to synths he built himself (the VCS3) - “Think of a sound – now make it” was one of EMS’ slogans. In a special collaboration for BA, Zinovieff will be joined by cellist and experimental composer Lucy Railton.

Moving away from dubstep as one half of Vex'd, London producer Roly Porter began to merge the most disparate of influences (classical, metal, noise) into an expensive sound, largely inspired by sci-fi themes and astronomy. Aftertime (2011) was inspired by the imaginary worlds of Herbert's novel Dune; The Life Cycle of a Massive Star (2013) was an aural epic based on the life stages of a star. His latest, Third Law (Tri Angle Records), follows the imaginary trip of the 4101 probe into a parallel universe made of antimatter. Silences and meticulously orchestrated buildups are key to his compositions, which heavily rely on suspense between one explosion of beats and the other. Considering how evocative Porter's sci-fi imagery is, we're excited to witness Marcel Weber's light and visual designs for the set (Weber already worked with Ben Frost, Clark and Kode9).

Mika Vainio (Ø/Tekonivel/Kentolevi/Philus) is a master in bridging noise and club music, and a prolific one at that. His career started in the early 90s and continued apace for 20+ years – even if you’re not familiar with his work, you might have encountered one of his hyper-imaginative remixes along the way; remember Björk’s ‘Headphones Ø remix’?. With two releases out in the autumn, Vainio will be premiering new material at BA, joined by Swiss visual artist Daniel Pflumm.

London duo Raime (Joe Andrews and Tom Halstead) returned after three years of studio experimentation to cement their aesthetic of urban decay and abandon. Tooth is their most sparse record to date, a stunning exercise in circularity and electro-acoustic brutalism that signals a departure from the impressionistic vignettes of Quarter Turns Over A Living Line (2012). There's something unforgiving about their new sound: repetitive, persistent, even vexing at times. It'll be interesting to see how their stripped-to-the-bone compositions reverberate live.

Orphx (Rich Oddie and Christina Sealey) have become synonymous with industrial techno, a status gained through their relentless experimentations with noise and uber-hypnotic rhythms. At BA they will be joined by legend Justin K. Broadrick, the man who featured on a Napalm Death record at 15 (!), went on to explore the depth of industrial metal (with Godflesh), and defied genre categories with projects such as Techno Animal. JK Flesh, his latest club-oriented incarnation, started only four years ago. Their BA collaboration is an equally tantalising and… intimidating prospect.

With titles like ‘The Empty Planet’, ‘The Quantic Room’ and 'Where Physic Ends’, Jonas Kopp’s last 12” EP Hidden Truth (Ownlife), reveals an interest in physics or, better, the idea of transcending/contradicting it. Through sound and light – courtesy of visual artist and designer Rainer Kohlberger – the Buenos Aires native will bring to BA the energy of Mount Shasta, California. The volcano is the subject of many legends, one of which claims that “The ground-based frequency evident at precisely that spot offers a secret key to open the chakras of the body and expand the consciousness”: the perfect occasion then to get a taste of Kopp’s abilities both as a techno producer and an ambient enthusiast.

Scottish composer Drew McDowall's reputation as a musician in bands like Psychic TV and Coil precedes him. McDowall belongs to a lineage of artists who made the history of the UK esoteric underground at the intersection of industrial, electronica and folk – what music critic David Keenan dubbed "England's hidden reverse". In 2015 McDowall released the noisetronica EP Collapse (Dais Records) and the cassette Haecceity Deluge (Ascetic House). At BA, joined by visual artist Florence To, he will premiere Unnatural Channel, a work that explores “darkly subterranean themes and the new world that emerges from the disintegration of mental, physical, and emotional unities”.

In 2013, along with Regis and James Ruskin, Juan Mendez aka Silent Servant founded the Jealous God label, a go to place for fans of conceptual techno with a decadent twist. SS will play with recent Jealous God signee – and post-punk enthusiast – Phase Fatale in a special live collaboration. Beware that these two might be plotting the harshest set of this year’s BA.

Death in Vegas will present new material at this year’s BA, following the release of their most experimental record to date, Transmission (Drone, 2016). According to press releases, Richard Fearless was inspired by his love of Throbbing Gristle and Chris & Cosey, which can only be a good thing. Amidst fuzzy textures and protracted drones, actress Sasha Grey’s breathy vocals accompany Fearless’ incursions into IBM. Considering how bleak and obfuscating Transmission sounds, their live will probably situate somewhere between the euphoric hedonism of techno and the endurance tests of classic industrial.

Although still in his late 20s, Copenhagen based Loke Rahbek's take on industrial can be considered relatively "old school". Fuzzy textures, drone drenched atmospheres, and a series of provocations coming in the form of WTF titles (Genitalia Garden is Croatian Amor's latest offering from last year), outlandish vocal samples, and a commitment to break the barriers between the artist and the audience (the only way to get hold of The Wild Palms cassette was to send Rahbek a nude selfie). At last year's Berlin Atonal, Rahbek, who runs Posh Isolation and collaborates with Lust of Youth, Damien Dubrovnik and Vår amongst others, debuted the Body Sculptures project alongside like-minded artist Puce Mary and members of Vit Fana and Farg. This year Croatian Amor will present a new audio-visual show intriguingly named Love Means Taking Action.

Long-time resident DJ at Düsseldorf’s Salon Des Amateur, Lena Willikens has gained quite the reputation for her quirky sets and post-genre sensibility. Merging techno, odd-ball disco, and industrial, her sets promise to be as fun as hard-hitting. At BA it will certainly be a welcome diversion from the overall gravitas of the festival. Listen to her own 12” Phantom Delia (Coméme 2015) to get a taste of her infectious omnivorousness.

German pioneer of electronic music and former Tangerine Dream member Conrad Schnitzler (1937–2011) left an immense archive of sounds to be used and recombined in live performances. In 2011, the series Con-Struct was conceived to make his discoveries available via “posthumous” collaborations. Pyrolator, a former member of legendary disco-industrial outfit D.A.F. and founder of Ata Tak records, released his own “collage” last year and will be presenting it live in Berlin. He promised to show how Schnitzler's work can be reinterpreted as proto-techno, which makes his set at Atonal an intriguing experiment in diachronic collaboration.

In the late 1990s. Porter Ricks brought minimal techno into uncharted territory with their DJ sets and releases on legendary labels Chain Reaction and Mille Plateaux. Their record Biokinetics (1996) is a classic of the dub-techno sub-genre, its texture-filled sound prescient of so-called microhouse and much of the stripped-down electronic music to come in the following decade. Type re-released it in 2012 for the first time on vinyl, but Andy Mellwig and Thomas Köner, who kept themselves busy with many collaborations and sound design commissions, have no intention to dwell in the past. The two have been working on new material that will be premiered in a special live set – easily one the highlights of this year’s BA.

Alessandro Cortini’s concert will close the festival on Sunday (before the aftershows/DJsets, that goes without saying). The fact that it’s called AVANTI - which of course, means “forward” – makes his set all the more symbolic. Cortini, who releases music both under his own name and, more recently, as Sonoio, will play with nostalgia and anticipation, setting Super 8 footage taken from his grandfather’s personal archive to his lulling compositions.

More information, tickets, and the full lineup can be found on the official website.