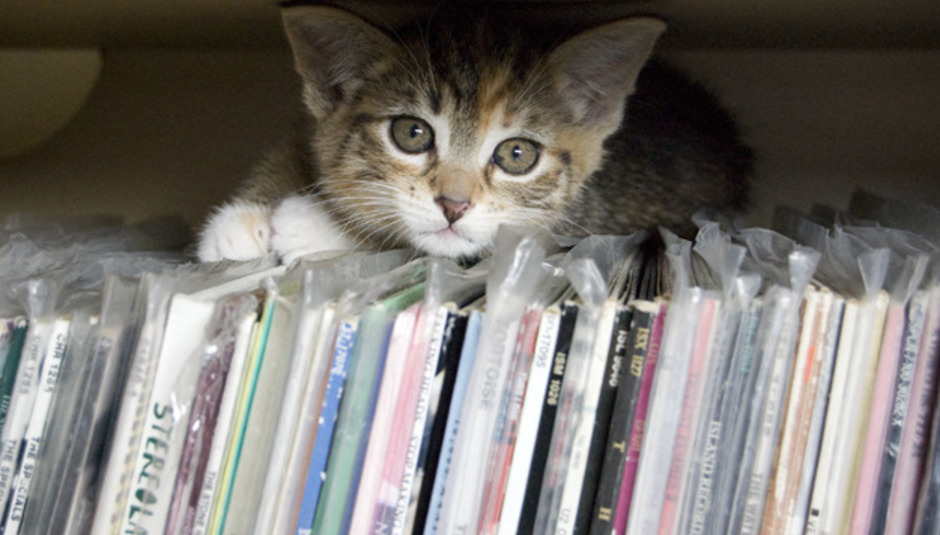 The annual Record Store Day (RSD) is nearly upon us. We assume the vast majority of DiS readers are already camped outside their favourite record shop, reading this on their smart-phone whilst sipping a thermos of soup, so we probably don't need to remind you that it's a day when various artists release super-limited edition one-off releases or (re-)issue records on vinyl in an attempt to lure people into music emporiums around the world. I mean, as if you fine people need an excuse to poke around a record shop - next they'll be inventing chocolate scented kittens... On top of all this, some acts will play 'intimate' in-store shows, for free, which is a rather nice bonus... sorry, I know you knew all this already...

This here internet page is Drowned in Sound's guide to Record Store Day 2013, which comes with a rather special competition and a SoundCloud compilation. This is far from thorough, it's just some stuff that stood out that we wanted to highlight, which perhaps you might like to consider picking up if it wasn't something already on your radar. Let's be getting on with it... DiS Editor's 6 Must Try To Buys

Warp have really gone the whole hog with this 12inch. Want this so bad. Pretty much everything Jarr touches shivers and aches, and if his Cat Power remix from the other year is anything to go by: go buy!

'From the Flowers Turn To Fire' is a 7" on Saddle Creek from Orenda Fink (of Azure Ray, Art in Manila) and Scalpelist (aka Cedric LeMoyne of Remy Zero). Orenda's voice is as lush as ever and Cedric's trickling wall of sound makes this utterly gorgeous. According to a note on YouTube, this track has already been used on hit US TV show Grey's Anatomy, but don't let that put you off. Not 100% sure if this 7" is available in the UK on Saturday but you can pick up the LP. Saddle Creek also have some RSD 7inches coming out from the likes of The Thermals and Black Lips (sampler here) .

7FAT124 aka The Twilight Sad's re-imagining of ‘(If You) Keep Me In Your Heart’ from Bill Wells & Aidan Moffat’s brilliant Everything’s Getting Older alongside a low key, piano led reading of Twilight Sad's 'Alphabet' (the opening track from No One Can Ever Know). Fat Cat Records, you really are spoiling us (it's just a shame this didn't come with a bottle of whisky)

With a lot of DiS readers hitting that age which involves settling down and having rugrats, the folks from Rockabye Baby! have worked out how to extract money from you, especially if you like the White Stripes. For Record Store day this album is getting a vinyl release. Obviously this won't make up for the 10th Anniversary edition of Elephant coming out for RSD and making you feel really-really old, but y'know, ce la vie, yolo, etc...

Zaireeka 4LP?!?! Yes, that's right, their record that you needed 4 CD players playing simultaneously to play, can be now be yours to play on four record players... might be quite fun to get your mates to bring their decks over and drink a keg of beer/box of wine, and soak it all in. This may or may not be the lamest coolest thing you will ever do. Gonna cost you about seventy quid tho...

Two of the greatest things humans have ever invented come together at last. Song by Toad are doing something special, but it isn't a legit RSD 'release' and it's very limited, so let's just say you should head over here and have a look if ale and vinyl are two things you like. (DiS will be reviewing these beverages at the weekend)

This guy always appears when you search for anything 'indie' on YouTube. He's done an oh-so-American guide which involves a human-being saying the word "seminal" out loud...

A hand-picked (which begins to verge on semi-random toward the end) selection of music that's available on RSD13... fill yer boots!

And finally, in a bid to win over your hearts and minds, we have nudged a few of our favourite labels and procured a haul, which is the motherload of record store day gems (with possibly more to be added to this list before we pick the winner). All you need to do is comment below or tweet @drownedinsound your answer to the following question:

If you were to form a supergroup, who would be in it and what would you be called? One winner will win:

And for 9 runner's up, we have copies of the Wings record, and we'll maybe throw in some other bits and bobs laying around the DiS office. Good luck!