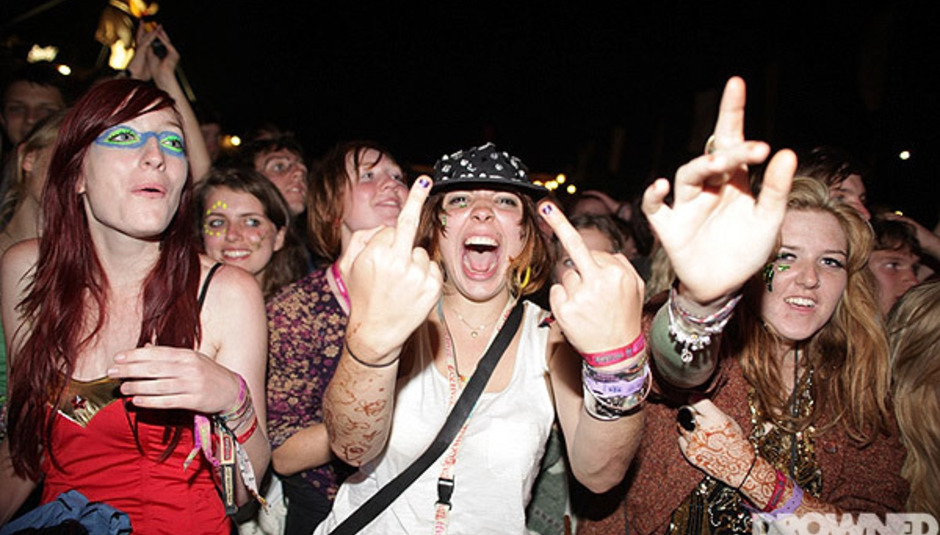 While the Easter Weekend may have been a complete washout (in the bitterly cold East Midlands at least) our favourite time of the year, festival season, is fast approaching. So, without further ado, here's Drowned In Sound's guide to who's playing what and where so far.

This year's Great Escape line-up continues to grow at a furious pace with another 150+ acts being announced over the past couple of weeks. DiS will be hosting a stage on each of the festival's three nights, this year's bills look something like this.

The full Great Escape line-up can be found here.

DiS also returns to the Camden Crawl over the weekend of the May Bank Holiday. Hosting a stage at The Black Cap on Sunday 6th, we can now reveal that FOE has been confirmed as the special late night guest for the DiS stage at Camden Crawl, alongside Hey Sholay, NZCA/Lines, Dam Mantle and more to be announced. The rest of the Camden Crawl programme can be found here.

This year's Summer Sundae bill is also shaping up to be one of the most attractive of the summer. Held in the grounds of Leicester's De Montfort Hall and its surrounding gardens from 17-19 August, the likes of Adam Ant, Public Image Ltd, Katy B and Death In Vegas among an already impressive line-up. DiS will also be curating the indoor stage once more and has The Twilight Sad, Stay+, Hey Sholay, Gold Panda, Maybeshewill, Her Name Is Calla and Django Django among those confirmed to play our stage.

Rob De Bank's Bestival has established itself as one of the man attractions on the festival calendar, and this year with the likes of Stevie Wonder, Sigur Ros, New Order, De La Soul and Soulwax among its stellar line-up, it's easy to see why. Held at the Robin Hill Country Park on the Isle Of Wight from 6-9 September, tickets are still available but don't hang around too long if you're thinking of going as it's sure to sell out soon. Full line up.

Also raising the bar this year thanks to a most excellent first batch of line up announcements is Latitude. Held in the grounds of Suffolk's Henham Park from 12-15 July, the already impressive bill has recently seen the likes of Lana Del Rey, Ben Howard, Phenomenal Handclap Band and Dave Gorman added with the promise of many more to follow. What's more, DiS are among the festival's media partners this year so we'll be first with any news updates. Full line up.

Taking place over the same weekend but in the slightly warmer climate of Spain's Costa Azahar is Benicassim. Although traditionally seen as the more Radio (One) friendly cousin of Primavera Sound, this year's bookings include the likes of Bob Dylan, Robyn Hitchcock, Totally Enormous Extinct Dinosaurs and At The Drive-In alongside New Order and The Stone Roses. Full details can be found here.

Les Eurockeennes, situated in the East Of France's Belfort region, has announced an impressive batch of acts this year. Hailed as "The French Glastonbury", Les Eurockeennes takes place from 29th June to 1st July. Confirmed so far are The Cure, Justice, Lana Del Rey, Mastodon, Refused and The Brian Jonestown Massacre among numerous others, with many more to be announced over the coming weeks. The full line-up can be found here.

Often derided among so-called "serious" music fans for its commercially driven line up, V Festival is a rare commodity in the current climate by way of it being one of the few festivals that actually sells out every year without fail. While this year's bill is unlikely to set pulses racing among the DiS boards, the likes of The Stone Roses, Noel Gallager's High Flying Birds, The Killers, Nicki Minaj and Ed Sheeran should ensure 2012 goes the same way as its predecessors in terms of ticket sales. Full line up details here.

Arguably the finest music festival in Europe, Barcelona's Primavera Sound will this year host a sister event in Portugal the following week. Optimus in Porto will run from 7-10 June and features exclusive performances from Explosions In The Sky, The Walkmen and Suede among others. For those returning to the more traditional surroundings of Barcelona's Parc Del Forum a week beforehand, the likes of The Cure, Wild Beasts, The Chameleons, Franz Ferdinand and Mudhoney await. In addition, a succession of record label curated free concerts will take place in the week leading up to the festival, starting with Memphis Industries hosting a showcase at the Apolo on 29th May featuring Dutch Uncles, Hooray For Earth and a DJ set from The Go! Team. The following evening, Beach Fossils, Chairlift and Tennis all perform at the city's Arc De Triomf. Full event details for Barcelona here and Porto here.

End Of The Road

Set in the idyllic Dorset countryside and boasting a consistently excellent line up, End Of The Road is another of those events that usually displays the "SOLD OUT" signs long before opening its doors. This year's event taking place between 31st August and 2nd September, artists already confirmed to play include Grizzly Bear, Grandaddy, Midlake, Beach House, Tindersticks, Dirty Three, The Low Anthem, Villagers, John Grant The Antlers, First Aid Kit, Jeffrey Lewis and the Junkyard, Robyn Hitchcock, Perfume Genius, I Break Horses, Lanterns On The Lake and they've been joined on the bill by the recently announced Mark Lanegan, The Acorn, Still Corners, Van Dyke Parks and Marques Toliver among others. Full information including where to purchase tickets can be found here.

This year's Liverpool Sound City event takes place at various venues across the city from 17-19 May. Among what can only be described as a widely eclectic line up includes Professor Green, The Wedding Present, Stealing Sheep, Alkaline Trio, The Temper Trap and White Denim. Also featuring a host of seminars and conferences in the daytime, wristbands and tickets can be purchased here, with the full musical line up here.

Everyone's favourite festival set at a railway station Indietracks continues to go from strength to strength. Already confirmed to play are Veronica Falls, White Town and The June Brides with New York's Slumberland Records hosting the outdoor stage. Last week, The Vaselines, Summer Camp, The Monochrome Set, The Jasmine Minks and Girls Names were among those added, with the promise of more to come. Excited? You bet! Full details here.

Taking place across the weekend of 2-4 June across three cities (Bristol, Manchester and its Nottingham flagship), Dot To Dot have announced a string of new acts alongside the previously confirmed Pulled Apart By Horses, Dog Is Dead and The Drums. Wavves, Willis Earl Beal, Hooray For Earth and Neon Indian (Manchester only), are among those recently added, with stacks more promised over the coming weeks. Full line up and ticket information can be found here.

With the cancellation of its main rival on the rock calendar, Download has capitalised on Sonisphere's demise by poaching one of its main bookings. The mighty Refused will now take the stage at the Castle Donnington based event which is set to happen between 8-10 June. Other new additions include Gallows, Kids In Glass Houses, Lower Than Atlantis and Fearless Vampire Killers. This year's headliners being The Prodigy, Black Sabbath and Metallica performing The Black Album in its entirety, Download promises to be the ultimate (only...?) rock event of the summer. Full line up here.

Taking place on the same weekend as Download and also situated in the East Midlands, albeit in the slightly more idyllic confines of Sherwood Forest is the inaugural No Direction Home event. Brought to you by the same people responsible for End Of The Road, the previously announced Richard Hawley, Dirty Three, Gruff Rhys and Moon Duo will be joined by the recently added likes of Serafina Steer, Joe Gideon & The Shark and Nat Johnson & The Figureheads. Tickets can be purchased here, with the full line up details here.

Also gaining a reputation as one of the finest independently run festivals on the calendar is Y Not. Now entering its sixth year, the Peak District based event hosts a diverse range of artists including Rolo Tomassi, We Are Scientists, Frightened Rabbit, Future Of The Left and Ghostpoet with lots more to be announced. Ticket and full line up details can be found here.

Serbia's Exit Festival has also established itself as one of Europe's most all encompassing events in recent years. Taking place in the Petrovaradin Fortress which overlooks the River Danube between 12-15 July, this year will see over 600 artists perform across 20 stages and includes the likes of Guns'n'Roses, New Order, Plan B, Duran Duran, The Gossip and When Saints Go Machine among its wildly diverse bookings. Full information on how to purchase tickets, where to stay and a full who's who of the line up can be found here.

September's Berlin Festival is another of those that features high on the priority list of the European reveller. Taking place at Tempelhof Airport between 7-9, artists confirmed to play this year include Franz Ferdinand, First Aid Kit, Sigur Ros, Friendly Fires, SBTRKT, Metronomy and Little Dragon. It also boasts having the world's largest Silent Disco party. Ticket and line up details here.

Finally, last but not least, for now anyway, comes the Wild West themed Winterwell. Situated at a "secret location" in the Cotswolds near Cirencester between 29 June and 2 July, its line up so far has the likes of Slow Club, Casiokids, Norman Jay, The Nextmen, London Afro Beat and The Shoestrung with lots more to be announced. They also have a luxurious camping area with bell tents and teepees complete with queen-sized beds and electrical sockets. Can't be bad then... Full ticket details and line up information here.