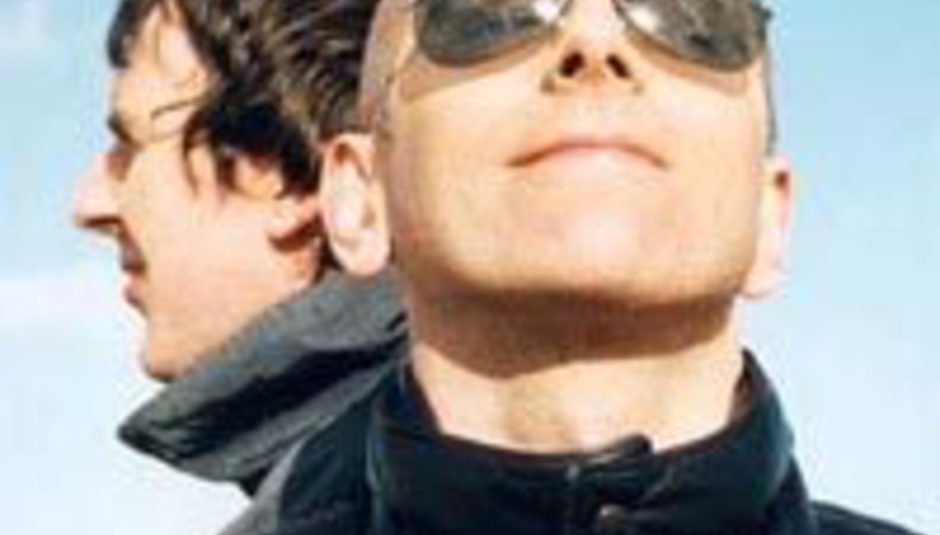 Shake it up and start again: Underworld's Karl Hyde gets all excited about the Riverrun downloads

Shake it up and start again: Underworld's Karl Hyde gets all excited about the Riverrun downloads

You might say Underworld have had a bit of a career. From Karl Hyde and Rick Smith's roots in art college guitar bands in the late 70s, the band morphed into Dance Royalty after DJ Darren Emerson joined the ranks. Together they produced three seriously seminal albums before arriving in the 00s minus Emerson but still clutching a well-above-par new platter. So what do you do while touring said album in 2003 with the biggest smile of contentment, ever, on your collective faces, safe in the knowledge of future financial security? Why, shake it all up and get dangerous again. What else?

Every so often, there's a wake up feeling when you think everything is getting too soft and easy but you know that that path will take you out of your career and away from everything. We were in the middle of touring A Hundred Days Off in 2003 through Australia and the Middle East and our record contract term was nearly up and Rick and I thought it was about time we got back to a place of uncertainty. So we started doing things for ourselves, and we also needed to expand our team to enable us to realise some of the things we had been talking about. We needed to get back to a place that had a bit of fear and uncertainty because, for an artist, contentment isn't good.

Who have you brought in to work with you?

Since the early 80s when Rick, myself and John Warwicker - with whom we formed one of our early bands, Freur, and then our graphic arts company Tomato - have had ideas about what we have managed to do now with the Riverrun series about the exchange of information through the internet. We had read articles by Robert Fripp who proposed that small, skilled groups of people would exchange ideas and interact in ways that would support, encourage and empower one another, and we thought, "Hey, that's great! But how are we going to do that?". We've had many ideas over the past 25 years where people would look at us and say, "That's great - but what does it mean?".

Eventually we found out that systems had been developed, such as the spread of the internet, that could provide us with the tools to do the things that we talked about some 20-odd years ago. And then we met people who actually understood what we were talking about. So things like selling our work on the internet, being self-sufficient in terms of doing our radio show, giving a lot of stuff away for free, doing live broadcasts from stage, ideas based around technology like internet TV or publishing books, all lead to self empowerment really, but in a practical business way.

Since November last, you have released, by download only, three half-hour pieces of music in the Riverrun series that could loosely be described as albums, but more accurately are five-or-so soundtrack clips each, that segue together seamlessly. They also arrive with bundles of artsy visual extras. Is the series complete?

No. Rick and I started doing this by jamming away on our Powerbooks and just passing them between us. We just opened the door and said, "Let's forget about Underworld", and just went for it and the material we ended up with became just too much to contain. We didn't have anything in mind when we started Riverrun - just that we wanted to place it somewhere between the John Peel show and the iPod shuffle, with layering material rather than joining it.

While playing one of the series, Pizza For Eggs, last night on my Nano, I explored the corresponding visuals on my PC. I was running the 444 included photos as a slide show during the intense final 10 minutes. My ears heard music, my eyes registered black and white urban images and my mind took in the captions. Then all of a sudden the three elements unexpectedly clicked together and I understood something of what you were doing. Basically, the mind will form a narrative from any disparate parts. You have constructed a three-way journey, whether the parts are naturally interconnected or not...

I guess in many ways there's no preconception when we're doing these things. With the images, I'd just go out and gather a couple of dozen images every day on my cell phone, so then you're left with all these images to find a home for. There was talk of putting them into a real, physical book, but I wanted to just give them away. We're working in a different realm now, where you can work completely unfettered by packaging and so on, so why can't the art be connected with the music?

When releasing your music in this way, do you think you are still reaching as many people as you were by the conventional, hard-copy ways?

No, I don't think so, but that was the choice that we took. In order to do what we're doing now it has been very much like it was back at the beginning, when we'd be taking the 12"s round the DJ shops and selling them out of the back of the car.

Even though you're enjoying your manumission, why have you decided to make and release a conventional album again?

Because it can be very useful being involved with a larger infrastructure that can enable you to be in front of people who might not have known about you otherwise. For instance, with 'Born Slippy', it was very easy for a lot of people to come to know about us who didn't know we'd been having a very successful career up until then, because we were on national radio everyday. We are very aware of these things because, no matter how fun all this playing with the new technology is, we still have families to feed. But we had to get this new way of doing things up and running before going back to releasing an album and then touring it, which we plan to do in 2007.

In the early '90s people would say to us, "You either get rid of the singer or you get a drummer, because you can't have dance music with a singer and if you have a singer then it's not dance music and you need to have a proper band". It was clear to us then that we had to do it for ourselves. There was an article in Wired magazine a while back that talked about the Long Tail Effect. It talked about how, collectively, the major-selling artists don't sell as much as the total number of sales of all the other people who tail off below them; that a book that sells, for example, a few thousand copies can sometimes be re-energised by another book on a similar subject that sells many more than that because it was referred to in it, or by a web-based publication. It was this that got us really excited because in a web-based situation, things can happen immediately; not three or six months down the line, but now, in a minute and you can update it with links and moving bits and images. That whole thing started to excite us.

We were doing a show in Tokyo late last year, and at one point we wanted the show to stop, for a film to be shown. So before the show, via the internet, we jammed the film and scored it and that got screened in front of thousands of people in Tokyo. It was really exciting. It was wonderful not being stuck in an old system of doing things that tells you, "You can't do that and why would you want to?".

Do you think there's any bravery on your part to actually go ahead and release immediate works that you've described on your site as being imperfect and possibly unfinished?

No, it's like common sense to us and it's what comes naturally. By contrast, when we made the decision to follow this path we found it scarier to keep doing the same old album/tour routine. It seems more natural to us to throw things up in the air and to go to a place that's more unsure.

The Riverrun series - Lovely Broken Thing, Pizza For Eggs, I'm a Big Sister, and I'm a Girl, and I'm a Princess, and this is my Horse - can be downloaded exclusively at Underworld Live.