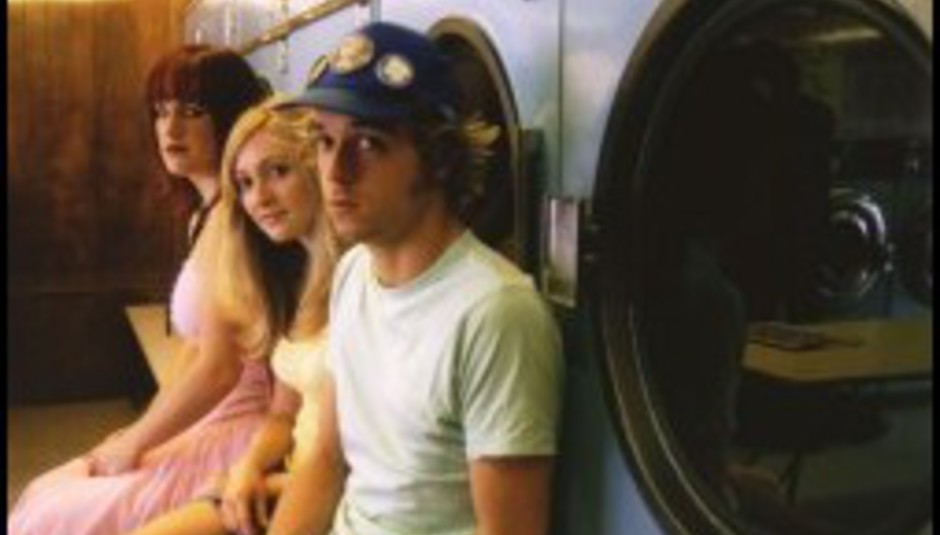 Dom Gourlay talks to The Research about pop, scenes, Tortoise and more as they sit on the brink of super-stardom.

The Research are one of those bands that don’t get anywhere near as much credit as they deserve. As the Yorkshire “scene” continues to grow in stature, spreading all around the county to its borders on the peripheries of Manchester, Derbyshire and the North-East, The Research have just carried on doing what they’ve always done best – making catchy, timeless, bittersweet pop songs that mostly follow a similar theme. Boy meets girl, boy gets girl, girl dumps boy. Their album, out in February 2006, is aptly entitled ‘Breaking Up’.

Tonight they’re in Nottingham with British Sea Power, and unless anything goes drastically wrong – like the batteries packing up in my Dictaphone halfway through our little chat (Doh!) – they’d like to share a few little thoughts with us all.

Comprising Georgia Lashbrook on bass, Sarah Williams on drums and Russell (The Disaster) on keyboards, all of whom contribute vocally and on the likes of ‘I Love You…But’ harmonise in the most luscious way while buildings tumble at their feet, The Research have a busy schedule ahead of them at the start of next year, but seem quite happy to take it all in their stride…

Russell: “We’re on tour for most of January and February. We’ve a single coming out followed by the album so…”
Sarah: “…it’s gonna be pretty hectic!”
Russell: “We finished the album in April of this year. It’s been pretty excruciating for us going through the motions of putting out single after single... trying to keep some sort of motion going on. We just wanted the album out all along but apparently the record company’s policy isn’t to just stick the album out on its own – there has to be a certain number of “lead” singles first.”

Would you say then that the record label (At Large, a subsidiary of EMI) has hampered your progress somewhat?

Russell: “I dunno really. I do think they expected our profile to be a lot higher at this stage than what it actually is. I’m kind of glad that it’s not to be honest!”
Sarah: “To be fair they have been quite supportive though, and they do let us do whatever we like in terms of which songs to release and what artwork we use so... I mean, they do throw suggestions about what they think we should do but if we want to do things differently they tend to listen to us.”
Russell: “Sometimes when we write a song and play it back to them, they’ll say that it should be a single and it has top ten written all over it, and we’re like “No! It’s only a b-side!” In terms of funding they’ve been really good. They let us record our album with John McEntire (Tortoise, The Sea And Cake) in Chicago.”
Georgia: “It sounds quite glamorous but it actually worked out being a lot cheaper than using some of the studios and producers over here.”

So are you all big fans of John McEntire’s previous work?

Russell: “Not so much Tortoise but, I like what he’s done as a producer with other bands…”
Sarah: “He’s been involved with some of my favourite bands. His recordings with the likes of Teenage Fanclub and Wilco stand out as some of the best ever made in my opinion...”
Russell: “I mean, I do like him as a drummer. It’s just that I’ve always struggled to grasp the concept of Tortoise!”
Georgia: “They don’t have many words!”
Russell: “No. I guess they’ve been immortalised in post-rock though, so they must have done something right!”

What would you say have been the biggest influences in developing The Research’s sound, as it would probably be fair to say that most of your songs, despite sharing similar lyrical patterns, don’t really sound the same musically? In fact, it would be hard to really pin down a definitive “Research sound”.

Russell: “I guess we’ve always been into different things and I’ve always tried to introduce different techniques when I’m mucking around in the studio. My main influence though has to be Calvin Johnson and that whole K Records thing. He didn’t follow any pattern, didn’t care about what was fashionable, and just carried on making and putting out what he thought was great music at the time. Which it was, and still is. At the same time I’ve always been into 60s bands like The Velvet Underground and the way that developed into a sort of DIY aesthetic. Again, there was no set structure to any of it.”

Lyrically, your songs seem to touch upon (mostly) failed relationships and the stories surrounding them. Would you care to elaborate?

Russell: “As long as we don’t have to go into too much detail! I guess they’re all just about big fears and the worst things happening that you can possibly think of…(changing the subject) I saw this card once that said I share my birthday with Bob Dylan… ”
Sarah: “I share mine with Kylie Minogue…”
Georgia: “I share mine with my old saxophone teacher!”

Touchy subject then, time to move on. The band has built up quite a hefty live following. Do you feel that your recorded output to date has matched the potential of your live performances?

Russell: “I reckon we are a very good live band. We don’t really go in the studio that much so I guess that when we do it’s probably not going to be as polished.”
Sarah: “I think since we’ve been doing this we’ve spent most of our time on stage. A lot of the songs actually came about through performing them live as an idea, and then gradually growing into songs through subsequent live shows.”
Russell: “The only real time we spent in a studio was the month it took us to record the album. Well, I was in the studio with John making the record – the girls spent most of the time on the beach!”
Georgia: “And it snowed! Well, some of the time anyway…”

How would you feel if the record company suggested changing the band’s direction and image, for example promoting the fact there are two girls in the band to try and target a different (and wider) kind of audience?

Russell: “Not very happy, to be honest. I was born to be a front man! Actually, it’s been suggested that we should get Sarah a drum riser so people can see her in smaller venues. I mean come on, we’re not going to take a massive drum riser into a venue with a capacity of about 50 people! The drum riser would take up the whole stage!”

Your first single, ‘She’s Not Leaving’, is probably the song most people associate with The Research. With the current trend being for bands to re-release their early singles, are there any plans for something similar with that song?

Russell: “No, definitely not. The record company want us to put out one of our previous b-sides (‘I Love You…But’) as a future single but we’re not having any of it.”
Georgia: “I don’t believe in putting the same single out over and over again. It’s had its time, it’s had its place, now it’s gone. It’s robbing the fans as well. If they want us to put a song out we’ve got plenty of others, and if they’re not good enough we’ll just write another new one.”

Does that mean there are a load of Research songs hidden away in the vaults that weren’t considered good enough by the band and therefore haven’t/won’t ever be(en) released?

Russell: “There are some but…my challenge at the moment is to write a whole collection of great b-sides to go with the ‘Lonely Hearts’ single (out at the beginning of February prior to the album). I just wanted to prove that we could keep on writing good songs as well as the original b-side that was written and recorded ages ago. Generally though, we just write stuff when we need to – treat it like a job!”

With the music business’ current emphasis being on Yorkshire rather than London, how do you see The Research fitting in with that so-called “scene”?

Russell: “I don’t know to be honest. We don’t really see much of it and I don’t have anything to do with the majority of the other bands around it. It’s like, we just wanted to play music together, so we put this band together and... we’re not really part of any Leeds based music scene other than getting phone calls from press people saying “We’ve got this photo shoot on the steps of Leeds Town Hall with these other Leeds bands…” and so we turn up and I’m asking everyone else who they are and what band they’re from and they’re all asking us the same questions! You know, I think it’s Chumbawamba, let’s all go and say hello!”

Do you think The Research – or indeed any of the other Leeds bands – has anything in common with each other?

Russell: “To be honest, I don’t really know what most of them even sound like. I know what ‘I Predict A Riot’ sounds like! (cue a chorus of “wooOOAAAHHHHH!!!!” from all three) I don’t really listen to a lot of the local bands or even English bands in general.”

You’ve been well received by the music press in general, particularly at Drowned In Sound. How would you react if you were given a really bad review?

Russell: “We’ve had them, the last single especially. It was really misinterpreted by some dickheads that sit there with laptops on their laps and…”
Georgia: “…I’m not going to bother listening to the words either.”
Russell: “We’ve been quoted as being the happiest band in the world which is just not true. One review said about our last single that you should never trust a band who sound this happy, and yet ‘C’mon Chameleon’ is one of the most depressing songs we’ve ever written. It’s like a proper old-fashioned pop song – we actually based it on a 1960s pop pastiche with a superficial element that offset the words so much better and it was dark and dreary. So fuck the journalist who said that we were the happiest band in the world! The thing is, I’m really into journalism, so I don’t mind if someone wants to write something negative about us, as long as they do it well. If someone’s going to do it and it’s an appalling piece of writing, it just upsets me so much. I mean, my record is far better than your review, right. I think the Internet is to blame for it in a lot of ways…”
Sarah: “…because anyone can now write a review of something on most websites. I mean, have you seen the reviews on Amazon?”

Why are you known as Russell “The Disaster”?

Russell: “I think it’s because at one stage of my life, I was reeling all of these people into my life and making them feel sorry for me. I built a wall around myself after – sort of like erecting a signpost in front of me saying “Don’t Come Near Me!”…and my cat too. He’s called Angus the cat-astrophy!””

What about Sarah and Georgia? Have you thought about calling yourselves something too?

Georgia: “We’re not that arrogant! In fact I've got a question for Drowned In Sound's readers - can Russell's head get any bigger!?!”