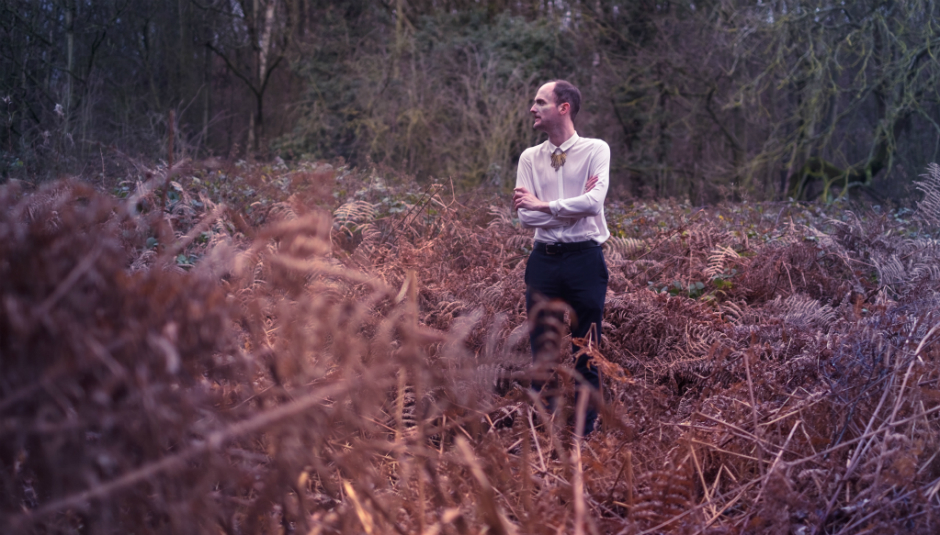 Four years ago Derbyshire-based, multi-instrumentalist James Machin announced his new dream-pop guise, Grawl!x, with the first record of a trilogy on death and grief. The recently released Appendix ends the trilogy as the most fully realised and confident realisation of the Grawl!x sound and as an astounding document of musical artistry.

Machin has created an ethereal personal world to inhabit, one that seems at odds with the real world but deals in the minutiae of everyday life. Our conversation takes place in a normal pub with middle-aged men singing and complaining about the state of the town and immigration, but we start off talking about cults. This juxtaposition is perfect for Grawl!x.

Appendix, like his previous efforts, deals with very real subjects with timeless musicality and complex artistry. It is a complete work that yields more ideas with each listen. The album is expansive in sound and in concepts, but the inspiration largely comes from a much smaller place. “The back of my head I guess. The old subconsciousness,” Machin explains.

“I’ve tried a few times to be a bit more, not topical, exactly, but to write on the topic of something. Sometimes it works out and sometimes it doesn’t. It’s quite a weird way to explore your own head really, because you end up coming across things that you didn’t even know you were bothered by.”

Like the old mythology of the character of Death, visiting the dying in his robes, the theme of the album visited Machin in a similar way, with him accepting what the album was about over time.

“It was only when I had written 80% of the songs, I do a little thing where I out it all together in a folder and read all the lyrics consecutively, I realised how many times I used the word ‘death’ or ‘dying’. Those related themes, so I was like ‘Oh that’s what it is about!” It doesn’t always happen that way, but once I realised I tweaked a little bit and wrote some more, some are written with the specific theme in mind.”

Inspiration can appear from anywhere. Take ‘Don’t Do It To Yourself’, one of the album’s clearer tunes in terms of message, which came from a passing phrase from a friend.

“She just said that phrase and I just took it out of context and thought it would be a really cool title for a song, and I just knew what it was about immediately. I think we’ve all been in that situation, maybe not with the suicidal thoughts, but where somebody is in a bleak place and needs you. Historically, I have always been the person in that situation and people have always reached out to help me, for which I am very grateful. I was almost writing from somebody else’s perspective.”

The song, about a friend “offering solace to someone considering doing that kind of thing”, utilised the sweet vocals of Danielle Cotterill from punk band Pet Crow, which creates a two-person narrative in voice.

Since the start of the Grawl!x project Machin has had a revolving door policy on like-minded collaborators to bring his vision to life. Appendix is no different, with composer Richard J. Birkin taking an active role in creating the album’s lush string arrangements and the likes of Haiku Salut and Shelley Jane Newman of Mighty Kids and Sex Jokes offering various instrumental and vocal support elements.

The result is music where each collaboration fits beautifully into the overall sound, never detracting from Machin’s own voice. How does Machin find the right people to add to the creative process?

“It’s usually just happenstance. With Richard and Haiku, I like hanging out with them so that’s the ulterior motive. They’re friends but they are also great musicians which helps, but then I think “on this bit I’d really like a clarinet” so I have to go and find a clarinet player. It gets build up like that.”

What makes Appendix stand out is the grandiose orchestral elements. It fits so beautifully into the overall Grawl!x dream pop sound that it almost seems meant to be, like fate. I wonder how this came about?

“On the first album there’s a song called ‘Butterflies’ that has live piano and live strings, and I just loved that experience, so I always knew I wanted to do live strings on something else. I went to him because he’s the man!

“It was much more of a collaboration than I thought it would be, because I have little to no knowledge of how to do that sort of thing. He has some ideas for some parts and I had some for others, but I didn’t know how to realise them. I certainly didn’t know how to conduct a string quartet or transcribe it to manuscript for that matter.”

Despite the obvious uplifting nature of the new album, death is not necessarily a subject that people want from their music. It is deep, complex and a journey into the unknown. Machin’s fascination with the subject could explain the complexities and contradictions between the sound of the album and its themes.

“It’s a scary thing. Nobody really knows what it is, what is going to happen. We know about it from a physical point of view, we know about the scientific but nothing else. I think that is why there are so many religions based around it. Every religion is basically a version of what happens after you die, that’s because people want reassurance in that respect. I don’t personally have that because I don’t believe in that sort of thing,” explains Machin.

“Some people don’t want to invest in that darker side of life that might be considered negative, people think life should all be positive. I don’t think that’s necessarily a bad way to be. Even know I the age of information I don’t think it is something that is talked about that much, which is a shame.” For Machin, the concept of mortality is not a pessimistic but optimistic part of life.

“Being aware of your own mortality makes you appreciate life more. I guess it’s just a scary, horrible consideration for most people. I guess that’s why we have gallows humour and things like that, which I am fascinated by and I find really funny myself.” Appendix certainly has this optimism flowing through out. It sounds like contentment and acceptance, it is the aural equivalent of smiling in the face of adversity.

“A couple of people who have heard it have said I similar thing. I was just worried it was going to be way too bleak and sombre. There is one song that I had to take off because it was going to run over to be a vinyl any way, but I just felt it was to bleak. It was called ‘Tapestries’ that one. When I hear it sounds like quite a sad album. But then again stuff like The Smiths is positively upbeat as far as I am concerned.”

While a little flippant and modest when talking about how his brilliant songs are concocted, Machin does elude to a ‘plan’ when it comes to the lasting impression left by the album’s last tune, ‘Apricity’.

“People can take away what they want really. That’s the great thing about music, and art. One doesn’t want to manipulate people, too much, maybe a little bit. Maybe ‘manipulation’ is the wrong word. I hope they get something out of it, some pleasure out of it.”

The completeness of the Grawl!x vision doesn’t just encompass the music but also a visual world also created by Machin, encompasing videos, album artwork and a short film ‘Fleeting’. In the vein of classic labels like 4AD and Factory, Grawl!x has a visual language that is immediately identifiable as their own, no matter what details change.

“It wasn’t something we were not that fussed about when we were in My Psychoanalyst (Machin’s past Derby based indie band), I don’t think but I just think it adds to it. It can create a little world for people to go to.” For this ‘world’ Machin draws in an unlikely source of inspiration – the world of pop music.

“It’s something with which I think bands could learn a lot from the world of pop music. That’s where I got a lot of the ideas from. When I was younger it was all about the music but as I have got older I want everything to be good. It’s better if everything is good, everything is to fit a theme. With some pop music I think the music can suffer because there is more emphasis on the visuals, that can be a trap to fall into. It’s a really exciting and interesting area to think about for me, the visuals, even though that’s not my world.”

This fascination, he explains, is what led to him creating a narrative short film using the music from Appendix as a soundtrack. The result Fleeting received a showing at his local art cinema before a show in an unused retail space down by the river Derwent.

The end of this trilogy is not the end of Grawl!x, who if rumours are correct has already finished recording on a fourth album which is likely to take the music in a different direction. But for now, it is worth submitting yourself to the wonderful world that James Machin has created on Appendix.

Appendix is out now via Reckless Yes. For more information on Grawl!x, please visit the band’s Bandcamp.