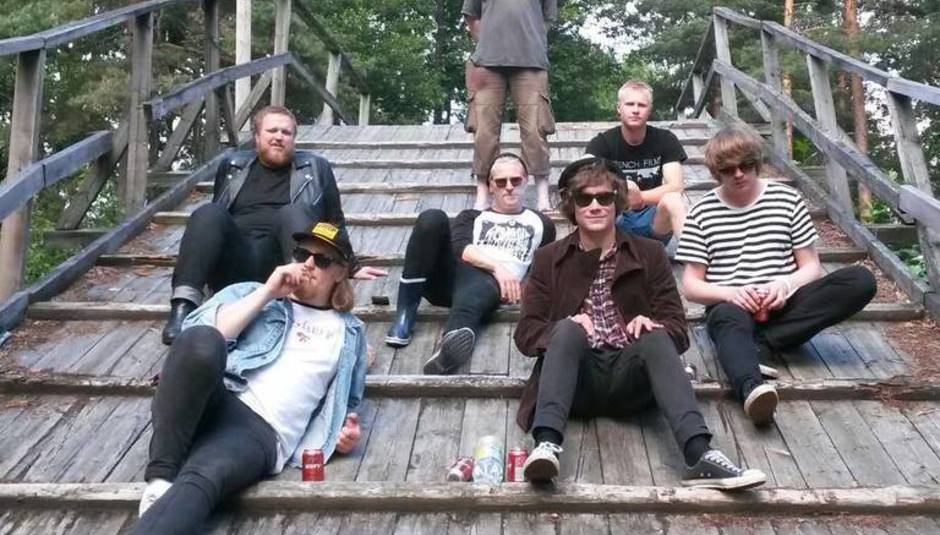 Teksti-TV 666 (translation: Teletext 666) hail from Helsinki and might just be your favourite new band. Initially formed as a three-piece in 2013 by Tero Huotari, his brother Timo, and Jani Karikoivu, the band soon expanded into the seven-headed beast that stands before us today. Boasting new fewer than five guitarists in their line-up, the band's music fuses influences ranging from heavy metal and krautrock to punk and shoegaze, while their on-stage performances have already earned them a reputation as one of the most formidable live outfits in Europe.

To date they've released three EPs, the first one (entitled 1) dating back to the summer of 2014, and last November put out a compilation of all three EPs on Svart Records (1,2,3). Intrigued and mesmerised by their recordings so far, DiS caught up with them prior to their recent show at De Spieghel in Groningen.

A collective by name and a collective by nature, here's what the septet had to say about their native Finland, playing shows abroad, writing songs and changing people's perceptions. Teletext 666..!


The band have been together just over three years. How did Teksti-TV 666 start?

Timo Huotari: We started as a trio. There was just me, Tero, and Jani in the beginning when we played our first show.

Johannes Leppanen: I was at that show and said I want to be in the band so I joined. That's the thing with this band; everybody joins but nobody ever leaves! But it's no problem, it's like a big family. We enjoy each other's company. It's so much fun.

Where does the band's name originate from?

Timo Huotari: In 2013 we played in another band and Tero (Huotari) was the tour manager and I remember him sitting on this couch in the hotel drunk as fuck and he said if he had a band he'd call them Teletext 666 and I thought: "Fuck, that's a great name!"

Tero Huotari: That's not quite what happened! I was sat on my couch watching teletext and making electronic music, and I just thought to myself the next band I'm going to play in will be called Teletext 666! And then I dropped the name.

There's a lot of diverse musical elements and styles in your sound. Is that something that's developed organically, as there is quite a dramatic change from 2014's EP1 to last year's EP3?

Timo Huotari: We started off with only one guitar, so once more guitarists started joining it gave us room to try new ideas and expand our sound.

Jani Karikoivu: Also we are very diverse personalities. Everybody brings something different to the band.

Johannes Leppanen: At the end of the day we just write pop songs. We just play them differently to how most people interpret the way pop should sound.

Your sound incorporates many genres from punk and metal to krautrock and shoegaze. One review described you as sounding like "Neu! playing Ramones songs." How would you describe your sound?

Timo Huotari: I'm not sure but that's a pretty good description!

Jani Karikoivu: Our sound comes really natural to us. Most of the songs start with someone bringing an idea and the rest of us just build on it.

Johannes Leppanen: A lot of it comes down to us being a tribe. We're a very democratic group.

How does the writing process work?

Jarkko Laakkonen: Writing process? It doesn't! We're like a 1970s commune where everything builds from nothing. There is no set process.

All your lyrics are sung in your native language. Is there a constant theme or themes running through them?

Timo Huotari: A lot of our songs are about real life only from the perspective of this one fictional guy. It can be quite depressing at times, but I guess that's a sign of the times we're living in. All of the songs on each of three EPs are connected by this guy.

Johannes Leppanen: He's a kind of mask. They're mainly about things that happen around us but through the eyes of this fictional person.

Timo Huotari: Our songs tend to be about anything from personal relationships to alcohol and drugs.

Johannes Leppanen: We're trying to express the feelings of alienation we encounter every day. If you're not one of those people who's engrossed in social media, trying to believe they're something that they aren't, its difficult to fit in. And I don't believe we do. We fit outside of the norm.

Timo Huotari: We tend to stand back and laugh at each other, laugh at ourselves really.

Jani Karikoivu: It's great that we can sing in Finnish yet still get to play so many shows outside of Finland. That international community spirit of rock and roll, it's so much more important.

Have the events of the past couple of years, such as the rise of right-wing politics and global austerity, influenced the way you write?

Johannes Leppanen: We're not interested in writing about politics. We're not preaching about anything. You don't really need a bunch of guys from Helsinki making loud music to tell you shit sucks.

Timo Huotari: It's really hard to write political lyrics without coming across as being earnest or condescending. The way I see it, everybody knows a lot of the world is fucked up. They need something else. People want an escape from all that.

You recently toured with Kvelertak. How did that come about and are you fans of their music?

Johannes Leppanen: I'm a huge fan. The first time I heard their music was only last summer when the most recent album came out.

Timo Huotari: We first met Kvelertak about a year ago in Oslo. At the time we didn't know who they were, but after our show they came over and said they were going to take us on tour with them. And then it happened!

Do you have any new music coming out this year?

Timo Huotari: We had a rehearsal recently which was quite rare for us. We don't rehearse much because we're all based in different districts. Normally what happens is half the band will rehearse so when we all get together - that's when we try to make new music. It's sounding really good, so I think we'll definitely release some new music this year. Our songs tend to come together really easily.

Are you all based in different parts of Finland?

Timo Huotari: We're all based in and around the suburbs of Helsinki, but it's much bigger than most people think.

Is there much of a music scene in Helsinki at the moment?

Johannes Leppanen: It depends what you mean by "scene". There's a really strong underground scene at the moment. Lots of bands incorporating lots of styles and doing their own thing. I wouldn't say they're all necessarily connected at all but it's healthy for the city in general.

Jarkko Laakkonen: The scene is functioning and that's what makes us proud to be a part of it.

Johannes Leppanen: It's all about songwriters. Live audiences tend to appreciate that.

Timo Huotari: Audiences can be a bit mainstream in their tastes sometimes. They tend to like traditional song structures, so when a band like ours comes along and does things differently it can... confuse them a little.

Johannes Leppanen: I didn't join a band to compete with other bands or live up to people's expectations and perceptions. It can be hard at times making challenging music, but if I didn't think it was worth doing I wouldn't be here. There is a competitive nature between some Finnish bands and I find that kind of thing really unhealthy. It's false.

Jarkko Laakkonen: We're also quite approachable, whereas some bands back home put a barrier between themselves and their audience. We want that warm connection between our band and people who've come to see us.

Timo Huotari: I was driving a lot of bands around ten years ago so I saw a lot of this competition. I don't like that.

You've played over 100 shows in the past three years. Mostly in your native Finland but more recently in other parts of Europe. Have the audience's responses been different from city to city and country to country?

Timo Huotari: When we play to a new audience the initial response is usually "What the hell is this?" Like last night for instance. But then once they got into it the whole room was bouncing. We noticed that from the stage. It was as if the people out front couldn't help it. They just had to let go of their inhibitions and enjoy the show.

Johannes Leppanen: The soundman said we were too loud last night!

Timo Huotari: He tried to turn us off halfway through the last song and then came onto the stage. I was like, "What? I can't hear you!"

Johannes Leppanen: We're not trying to be smart or anything. It's just the volume at which we like to deliver our music.

This is your first festival of 2017. Are you playing any other festivals this year?

Timo Huotari: I don't know. Maybe something's coming up as a result of these shows here?

Johannes Leppanen: We'd like to play some of the UK ones.

Is it important for the band to be able to feed off how the audience respond when playing live?

Johannes Leppanen: It's not like that with every show, but sometimes it can make a difference. We're more likely to feed off each other and if people like it that's a bonus.

Timo Huotari: If we're having a good time the audience will too.

Do you prefer playing live or working in the studio?

Timo Huotari: Definitely playing live. It gives us an outlet to channel our own emotions and feelings.

Jarkko Laakkonen: It's a lot more fun as well. Every show is different from the last one.

Are there any other Finnish bands you'd recommend Drowned In Sound and its readers check out?

Timo Huotari: There's a band called Circle you really should check out.

Johannes Leppanen: I have lots to recommend. Overdose Support, Litku Klemetti, Prospero, Plastic Tones, Merries, Kynnet and Oranssi Pazuzu are all worth checking out.

Timo Huotari: Just do it, but really really think about the songs that you write. Focus on the songs.

Johannes Leppanen: Don't worry about being signed or any of that bullshit. There are so many channels of communication nowadays. You can make music in your own basement and get it out to as many people as you like.

For more information on Teksti-TV 666 visit their Bandcamp, Soundcloud and Facebook pages.