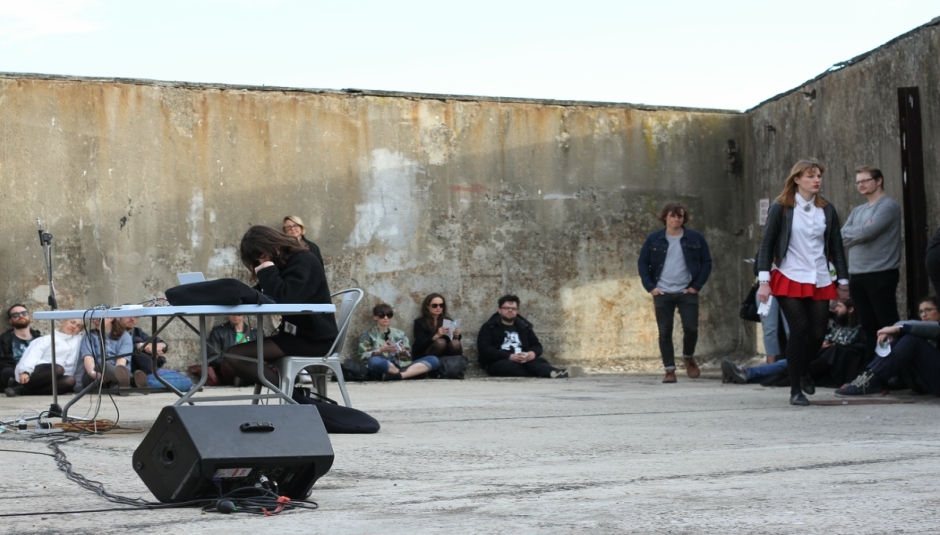 Stiles plays guitar in Sydney band The Rangoons and the Roamin’ Catholics, yet her first self-titled solo album of a-cappella music sounded completely different, using vocal effects to resemble drone music through looping choral harmonies – creating a hypnotic and otherworldly effect. In Molten Metal, Stiles produces a broader range of tracks from a more ambient sound fully focused on voice to a kind of dark dance music. She records instruments and layers loops with different harmonies and timing to produce music that sounds electronic, a disquieting technique as people can never be sure what they are really listening to. The result can be cryptic, like trying to understand instructions for joining the occult in an unfamiliar language. Combined with lyrical references to the supernatural, the overall effect is of something disturbing and compelling, like being attracted to a mystery.

Stiles is also currently collaborating with Jazmine Brooking in The Rangoons as well as the record label Paradise Daily, which challenges sexism in the Sydney music scene not with any overt strategy, but just by making it the norm to have a lot of women involved. Stiles, Brooking and I talked her new album, mixing folk and industrial to create a sense of the supernatural, and what it is like to run a record label in Sydney.

DiS: There is a feeling of the sacred in some of the first songs in the album. It’s a bit dark, in a way that music that plays with the supernatural or the sacred is a bit darker sometimes.

Ela Stiles: The whole album is a bit surreal. You don’t know what’s real and what’s not. Things that I think of when I hear it would be completely different to what someone else thinks of.

The second track ‘Hit Hard’ has a kind of tribal drumming...

ES: That’s an old one. The first track ‘Five A.M.’ I recorded when I was in India. I sort of knew that would be the first song. It continues on from the first album, it shifts from a bit experimental and goes more dancey. I didn’t really plan it.

What was it like doing a track in India?

ES: I got all these recordings from when I was traveling around and I just recorded it one night in my hotel, I put together all the sounds and added vocals etc. It’s the city echoing in early morning Jaipur. It sounds like wailing, and I added my own vocal drone - an uneasy sound, the sound of the city waking up, but it wasn’t direct noises if that makes sense, more of a city-wide echo.

What about the one that you perform live a lot – ‘Molten Metal’?

ES: It’s about intense, almost uncontrollable emotions, being afraid and ashamed. The harmonium in the background was the basis for the song then all the other loops and noises came into it and it just took on a life of its own. Most of the time I don’t really know what it means but to me but it’s like a chant – “I seethed like a pot, dark as a grave, molten metal I’m feeling afraid” is quite dark, but the melody makes it feel hopeful I think.

How do you play that one live – because it sounds like there is so many people singing?

ES: It’s harmonium loops played through tape and delay, and just weird stuff that was on the tape. The looping vocals at the end were on the tape and then a clearer version of that comes in, which is also a loop, and then I sing over that as well.

I remember you played it live at that festival on Cockatoo Island – under the clear sky with wind and birds flying around in the background – it was a perfect atmosphere.

ES: Oh yes, that was an amazing place, in the open bunker! The performances at Cockatoo Island were good because I was expecting people to just walk in and walk through but people actually came to the specific performance times and sat there while I played. And also because Jon (Hunter) had set up speakers around the bunker but also on the outside so you didn’t even have to come in.

You had the wind, which changes the sound, but also the walls as well which gave it a kind of echo. Did it affect how you recorded the album?

ES: Yes, because I just started making all those recordings to tape and then using them as the background to the drum beats and stuff – like that song, ‘S.B Mantra’, has no actual other music to it, it’s just a flute sample that I made and me putting the microphone too close to the amp and it feeding back. I used a few of the sounds that were on my last two tapes Preparation and Black Metal on the album. I like how it all ties in together, re-imagining the sounds into something different.

I know you play instruments like guitar in the other bands that you play with, but there seems to be more of a focus on vocals in your solo work?

ES: Yeah, I don’t really want to play guitar live for my solo stuff at the moment. ‘Molten Metal’ (the song) is all harmonium. At the moment, I’m interested in recording more organic sounds and using them in an electronic kind of settings. I like the idea that when people are listening to me play, there are so many sounds that you would never guess what they are. I recorded and mapped out the whole album, then went to Melbourne and we did vocals and lots more overdubs with producer Jack Farley. I do experimental stuff, but I’m also really into pop music and singing, and I love singing more than anything, so I just really wanted to write some more pop songs. Ideally I’d just love to sing and leave all the music production to someone else.

This album has alot of pop elements.

ES: Yes, but they’re all kind of skewed and weird.

And dark as well.

ES: I’m trying to make pop songs, but it’s not really working. Also, the whole album is metallic from start to finish, which was a conscious thing - Molten Metal. Justin Fuller (from Zond and Tol), who played on five of the songs, did a lot of the metallic sounding drone stuff. He played guitar and electronics on it. I really like the sound he created on ‘Hit Hard’ that is constant throughout the whole song, just underneath, creating a feeling of uneasiness.

What’s the show you’re putting on?

Does it work well having a label and doing events?

ES: I think it works well.

JB: Yeah, in a way I think the events are kind of a big part of it for me. The first few shows I ever put on were well before I intended on putting out music and having a record label. People have been really responsive, it’s great. Lately, when we get full crowds at Paradise Daily shows, I can hardly recognise half the people that are there. Which is good because for a while it felt almost rare to see so many new faces.

How long have you guys been working together on the Paradise Daily label?

JB: We’ve been working on it together pretty much ever since Ela and I became friends.

ES: Everyone has their own little roles.

JB: I think Ela started working for the label because she has a big industrial printer at her work. And with the first Rangoons tape that came out she printed it at her work and we started doing all the crafty stuff together – cut out all the cassette covers and put them in cases and started from there.

How many artists are on the label?

JB: No one is really on the label as in contracted or signed or whatever – they’re free to do whatever they like with the release, I leave everything up to them – but there are about 23 releases so far. Roughly 18 to 20 different artists all together.

Do you think it’s a thing that a lot of the people involved in the label are all women, that it has affected you?

JB: It wasn’t planned – I eventually want to get someone to start filming shows, doing visual projections and what not.

ES: Just easier to work with.

JB: Yeah, there’s like a million reasons I can think of.

ES: I also think there are so many men in the music scene, and left up to them they would book shows and just not think about including women. They shouldn’t have to think about it – it should just come naturally because there are SO MANY great artists who happen to be female obviously.

JB: Show after show of all male line-ups, review after review of only male bands, interview after interview…

It doesn’t really reflect what’s going on in the music scene in Sydney.

ES: These guys put on these shows that are all male line-ups…

JB: ...and they’ll have an excuse like: “We wanted to put on a punk show.” And we’re like: “Open your eyes!” There are probably 50+ different local punk bands from Sydney, Newcastle, and Canberra or whatever that have one to three, or more, women that are playing shows and are on all the same line-ups all the time, but they’re just too dumb to think about it.

It becomes that kind of tokenism, moving beyond that to just having diversity.

ES: You just want it to be a non-conscious thing really.

JB: That’s like with the Rag Rag festival, the first big all female line-up that me and Ellen Pearce of Destiny 3000 and LA Suffocated put together. We never once advertised the fact that it was all women on the bill – almost every all women line-up will have a title like ‘Girlsfest’ or something, which is totally fine, but it’s not like you ever see a show called ‘Men Fest’ and you never see ‘all male lineup’ in the description. We didn’t have to mention it was all women and people were super excited over the line-up before they had even realised it was all female. That’s really good I think, instead of everyone clicking attending on Facebook because it says ‘all women’ or whatever.

There’s a lot going on musically in Sydney at the moment. Do you think it’s changed in the last couple of years?

JB: It’s great how much is happening musically in Sydney at the moment. It’s changed a bit but it also just feels exactly the same. I guess maybe you could say guitar-pop-bedroom-stuff was quite popular a few years ago, but a lot of artists are branching out now and trying new things. I mean, people have been branching out forever and ever, but the ex-bedroom pop artists are maybe branching out into different fields these days, I don’t know.

Molten Metal can be ordered here. There are Paradise Daily shows on the 17 December at the Portugal Madeira Club, and on the 23 December at Black Wire Record Store in Annandale.