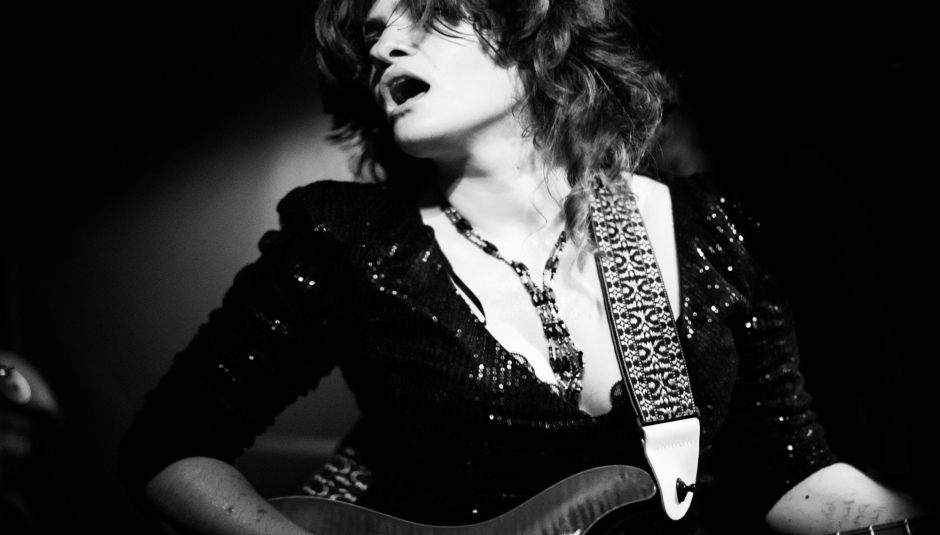 Trekking through the surging safari of festivals which now litter every month of the year, you see many of the same things. Coloured flags flapping, endless seas of revellers in varying states of lucidity, and band upon band upon band. You see world music, jazz, folk, metal, indie, and fans range from dreadlocked hippies right through to pristine festival fashionistas. The bands themselves seem like a menagerie of exotic creatures, from every walk of life. And yet…

Maybe it’s because I’m a girl. Maybe that’s why the scarcity of women on the stage jumps out at me. Maybe it’s because I am one of those women who DOES perform regularly. I experience many surprised looks, and no end of ill-judged comments, though perhaps they’re sometimes intended as compliments: 'You’re a pretty good guitarist, FOR A GIRL'.

In my (all girl) school, we were NOT encouraged to take up band instruments; girls should play violins, flutes, and sing in the choir. When we insisted that our punk band be allowed to perform at the school concert, well… it was interesting. The boys’ school however, was bands galore, with all the equipment, guidance, and encouragement they could possibly desire. Especially around this time, the lack of female role models in bands irritated me. Now listen to me carefully, I’m not saying you can’t have male role models as a women, or vice versa (obviously). But the fact is that the more closely you relate to someone doing what you want to do, the more similar you feel to them, and the more inspiring they are to you. This applies to countless other characteristic beyond gender: race, religion, sexuality to name a few (think Bowie as an idol in the LGBT community).

Nowadays, I am fortunate enough to know many amazing musicians, including women who give as few fucks as I do about strolling around in a male-dominated industry, and men, who if they've even noticed I’m a girl, haven't mentioned it. And not forgetting those who don’t adhere to society’s binary view of gender, I salute you (you have the toughest time of all). However, in a male-dominated and famously misogynistic industry, sexism IS there. 'You only got the gig because you’ve got tits', 'Excuse me, you’re not allowed in here, it’s bands only', 'Are you carrying that for your boyfriend?', 'Let ME sort that out (your vagina clearly prevents you from knowing how to do it)'.

In writing, performing, and recording music, gender has absolutely NO effect on the outcome (except perhaps your lyrical standpoint, and the guitar/boob issue… anyone?). The disparity lies between how open the field is (and appears to be) to women; how much are we encouraged to enter it, and how welcome do we feel within it? Who are the successful women we can find to inspire us? How do we deal with pregnancy, child-raising, and the ever-present danger of simply being a woman out late at night, or alone? There’s a dispiriting lack of female engineers and producers too. Relative to my ideal vision of the music industry, we’re still very far off.

The media play a huge and despicable part in this, ramming the idea down people’s throats that women are only for looking at, that we are not supposed to have talents. If we must, let us sing, but most importantly make sure we’re sexy, and preferably in underwear, to ensure that the REAL money-making can happen. A whole section of society is under- and mis-represented in the music industry: this is not because EVERYONE actively endeavours to stop female musicians being able to work in the same way (and with the same respect) as men, but because too few people actively encourage it! Excuse me whilst I go and cool off.

Female is not a genre. Bands shouldn’t be described merely in terms of their gender, in the same way female politicians shouldn't be described merely in terms of their outfit choices for the day. But people doing things that aren’t yet the norm for their social group is worthy of attention. The situation reflects the worldwide position of women who, on the whole, in many places are still treated as second-class citizens. To see women in positions of power and creativity is a GREAT thing and one which should be celebrated.

Celebrating female musicians is not positive discrimination, and it is not man-hating: whilst women in the music industry are still in the minority, and still feel any level of inequality there, then there IS A PROBLEM. Only 12% of the writers/composers paid royalties by PRS for Music are female - they’ve started a specific fund to address the imbalance. We’ve all seen the Reading Festival poster where all the all-male bands were removed to leave a pitiful amount containing female members. Reading Festival is not the devil, but we need to highlight this disparity. After centuries of sidelining - isn’t the celebration of a minority a good thing? Isn’t diversity the name of the game? I’m not advocating terrible all-female bands over really great all-male ones (obviously). I’m simply saying that girls in bands are still a rare and beautiful sight that deserves to be celebrated by ALL of us. Because, whatever you think, it took more to get them there. To boldly stroll into this world takes a lot of (metaphorcial) balls.

I love the bands who embody empowering attitudes, and whose male and female members celebrate the strength of femininity. Whilst we female musicians are still the 'other', let’s get lauded for our talents, not our bodily assets. There are girls waiting for creative role models: I believe that the more female musicians there ARE, the more there WILL BE.

You can check out a preview of Maddie Jones' forthcoming material here, and support the band here.