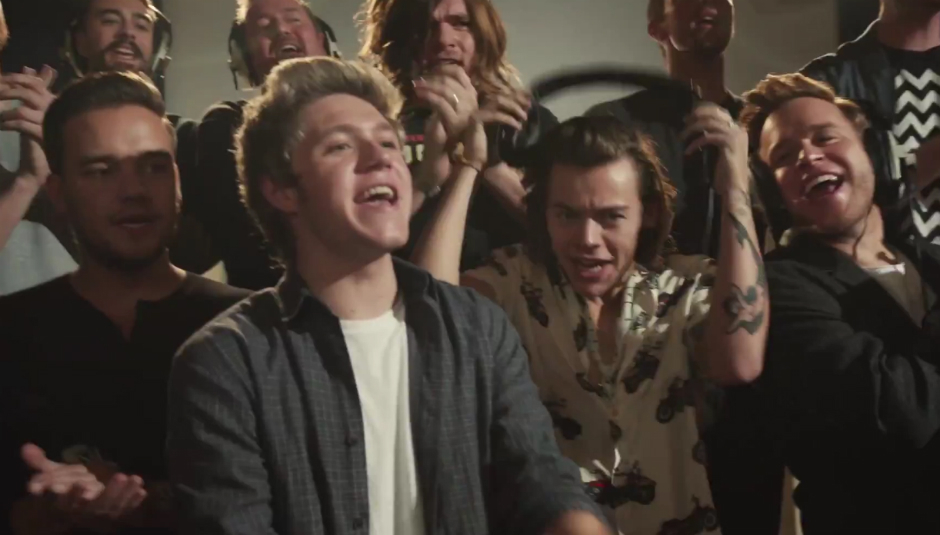 Hello and welcome to a brand new edition of DiS Does Singles. Your favourite weekly column of new tunes and nonsensical mumblings about them.

We went to the ABBA museum in Stockholm this weekend and heard the new Band Aid 30 song. One of these experiences was Grade A phenomenal, but SEO dictates we have to write Sam Smith’s incomprehensible warbling instead. ‘Do They Know It’s Christmas (2014)’ is Single of the Week because it is the only single you will be talking about this week.

If Bob Geldof and co aren’t to your tastes, we’ve still assembled a selection of additional tunes for your listening pleasure. Taylor Swift has (once again) shown why she’s the world’s biggest popstar, The Districts have cemented their status as a new band to get enthralled with and Demob Happy are exactly what you’d expect of their band name.

Some people say rock ‘n’ roll died when The Beatles split up. I say all Christmas songs after 1st November 1994 are null and void. Anyone who disagrees should be slapped in the face with a yule log, or have to wear one of those heinous cracker hats the whole year round. Whichever punishment is the least practical.

It’s been 20 years since Mariah Carey declared her love for both Xmas and me, so you do have to wonder what kind of self-righteous, clod would attempt to top her gobsmacking classic?

Now there’s a time and a place for sensible discussion of the ebola crisis, and that is 7 o’clock everyday on Channel 4. Cathy Newman even interviewed Damon Albarn and Afel Bocoum this weekend. Damon said some fairly sensible stuff relating ‘the West’ and ‘our idea of charity’, but remained silent on the best pun band name for this lot…

So back to Band Aid 30, and in case you’re still in suspense as to whether the new ‘Do They Know It’s Christmas?’ has bucked my golden November 94 rule, then god bless. It’s tripe. Well-intentioned, fist-in-mouth tripe.

Even accounting for a revised and slightly less patronising lyric sheet, as well as the inexplicable presence of Seal, then this new charity opus is definitively shoddy. The song’s now traditional divvying up of lines between megastars (arf!) ensures each artist spends their five seconds in the spotlight straining for your attention, while Midge Ure’s blend of synth and sleigh bells hasn’t aged at all well. Like shoulder pads and Noel Edmonds' Swap Shop, 'Do They Know It's Christmas' only makes sense in the context of the 80s.

Since Bob Geldof has already emphasised “it really doesn’t matter if you don’t like this song”, criticising its fourth edition is roughly equivalent to to pissing into an industrial wind turbine. The track is a cheery vessel to be adorned with celebrity cameos, Tracey Emin artwork and primetime ITV coverage. It’s a magnet for public attention and the charitable contributions this encourages.

While it’s tempting to imagine a wisened Irishman sitting at home, counting down the days until his greatest hit's next big anniversary arrives that’s probably not the case with Band Aid 30. I doubt the thought of sharing a recording studio with Clean Bandit, Disclosure and Bastille holds any allure for Geldof. Instead, he’s revived a timeworn formula because human nature hasn’t changed in the last three decades. For sheer fund-raising prowess, homegrown glitz trumps showreels of the poor and infected. After all, we are talking about the realist who boiled Live Aid down to one profanity-strewn sentence, "Give us your fucking money."

When you think of Band Aid 30 like that, Bobby G must be as cynical as the rest of us. Plus, Bono was available. That's important too.

Support our #EbolaCrisis Appeal. Text DEC to 70000 & give £5 and help #StopTheSpread pic.twitter.com/aGtKhYqire

If Pitchfork is to be believed, then 2014 is the year of the crazy ex-girlfriend and Taylor Swift is wearing that tag as though it’s a badge of honour. Her video for ‘Blank Space’ sees the former ‘Love Story’ singer burn her boyfriend’s suit, take a golf club to his vintage Shelby AC Cobra and generally act like “a nightmare dressed like a daydream”. It’s a hell of a lot of fun to watch, and a fitting send up of an outdated cliché.

As for the song itself? It’s the fourth best track on 1989, so one of the finest pop songs you’ll hear this side of December. Unless T-Swizzle gets round to making an ‘Out Of The Woods’ video, then we’d really be in business.

Eternally spurned and damned well superb, former Single of the Week-ers The Districts are back with the lead single from their second album. ‘4th And Roebling’ was produced by John Congleton (Swans, St Vincent) and turns up the band’s rustic, Americana swagger to the point where you’ll need a tetanus shot after its aural assault. “I ain’t the same from before,” insists lead singer Rob Grote, but this Lititz, Philadelphia four-piece haven’t changed one bit. They’re still one of the most exciting new bands around.

The last rock band to take over the UK were Brighton’s Royal Blood and now that traditionally raucous city has spat out another suzz-filled outfit with major league ambitions. Demob Happy are a delightfully grubby bunch who make noise that’s a lot better than the collective sum of their haircuts. If Mudhoney hadn’t dissolved into the ether already than you’d swear ‘Succubus’ originated off Superfuzz Bigmuff. Nostalgic debts aside, it’s a debut single to make you stand up and take notice.