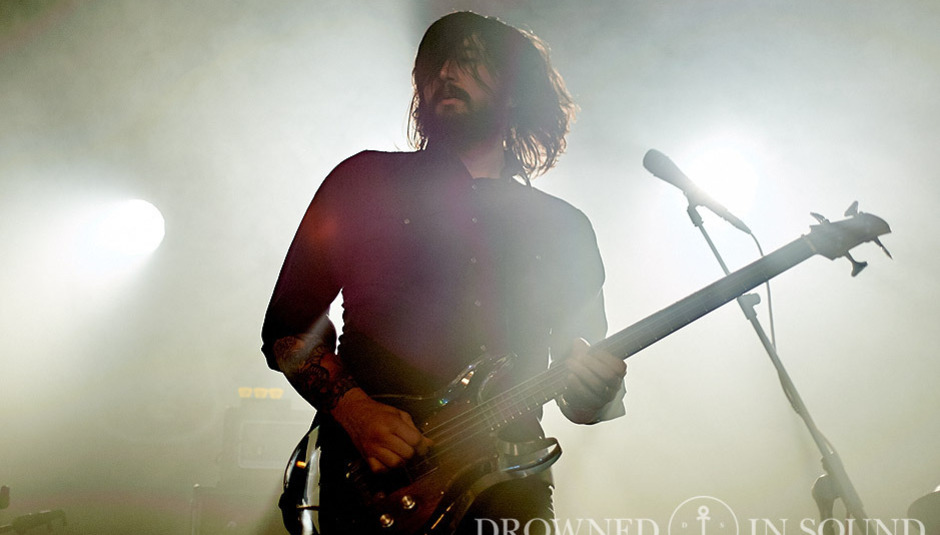 'I don’t feel comfortable with all these drinks around,' said a random guy next to me five minutes before stage time. Turns out his worry was well founded, as approximately ten seconds into ‘Turn It Out’ I, and everyone else around me, was liberally sprayed by airborne jets of lager. People are very, very glad to have Death from Above 1979 back in their lives. And they have every right to be. DFA’s mix of hyper-noisy dance punk was fresh as hell in 2004, maybe even a little too out-there, but then they did what so few bands have ever managed: quit while they were ahead and let their mystique grow. Then they did the even rarer: make a post-reformation album that wasn’t complete garbage.

I first saw the band what feels like (and essentially was) half a lifetime ago, back when they were just plain old Death From Above, sharing a rather oddly-picked bill with The Futureheads and The Rakes at the Hammersmith Working Men’s Club. Even then I could tell there was something special about them, and like a complete idiot I never saw them when You’re A Woman, I’m A Machine dropped and helped define my adolescence. So you can imagine my joy at being able to see them again, and to discover they still totally rock.

My impromptu beer shower showed that I was not the only person overjoyed at their return, and nor was I the only fan of 2014’s comeback record The Physical World. Obviously the newer album was more heavily featured in the set but the frenzied reaction to the new material hardly suggested a crowd patiently gritting their teeth in anticipation of 'the hits'. Indeed, ‘Right On, Frankenstein!’, ‘Always On’ and ‘Gemini’ were practically riotous, and sat very comfortably among the older material. And sure, it would have been nice to have had ‘Blood On Our Hands’ and ‘Black History Month’, but you can’t hold a grudge when the duo ripped through the likes of ‘Going Steady’ and ‘Cold War’ with such energy, and when the extended, pumping take on ‘Little Girl’ provokes an honest-to-God circle pit (and not even the first one of the evening).

What’s even more remarkable is how much stage presence and sheer volume is generated by just two people. The two are quite annoyingly talented, especially the wonderfully hirsute Jesse F. Keeler, who must surely count as one of the most talented bassists of his generation. Churning out that many riffs, at that speed is pretty damn impressive to behold; in Keeler’s hands the bass really is an angry, snarling weapon.

Which is not to belittle the talents of his partner in crime Sebastien Grainger, who - yeah, I’m saying it - is among the best singing drummers ever. Grainger also professes a warmth and humour one might not expect from a band so thrashy and angular- stating that the mass singalong ‘White Is Red’ bums him out because the song is so sad, or wishing that his drum kit could rotate so he could pay attention to all sections of the audience equally. 'We’re from Canada, the best British colony of all time,' he states at one point before quickly adding 'Nah, just kidding, there’s a lot of great British colonies.' It seemed like Death from Above 1979 were just as happy to be playing in London as London was to see Death from Above 1979. Come back any time, boys. Just don’t leave it so long next time.

Alvvays: 'We almost died one night, a...