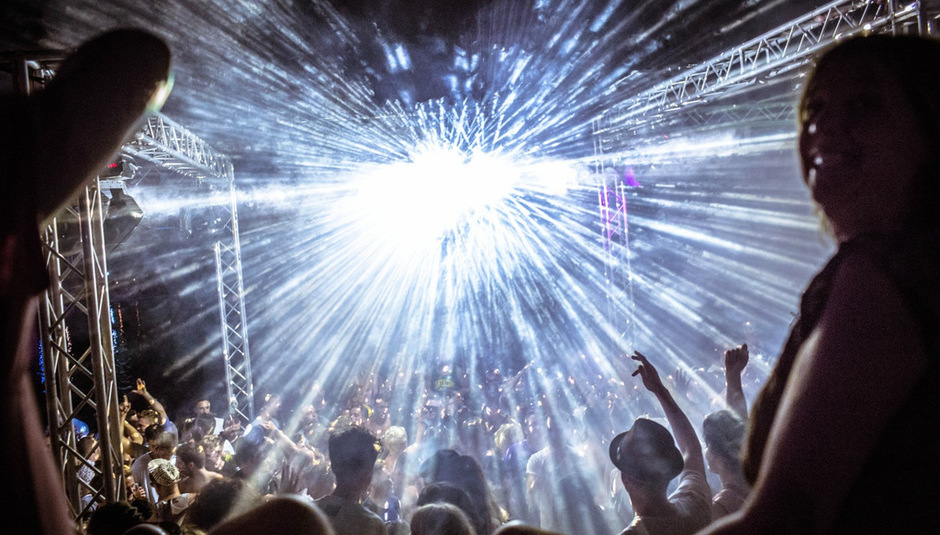 Located on the south east coast of Croatia between Zadar and Split sits the picturesque town of Tisno – snuggled between hills and the crystal-clear water of the Adriatic. Ships bob in the harbour, the sun beats down – life seems idyllic. But for the summer period, the Hostin Rastovac camping/apartment site becomes a hive of activity, with music, partying and sun-worshipping rolling together into an intoxicating, celebratory atmosphere. I was thrilled to have the chance to join in with the festivities for the latter part of The Garden Festival and the whole of Electric Elephant 2014 back-to-back, giving an insight into a unique party providing a glorious summer experience.

The festival takes place in a surprisingly compact space in and around the site itself – the main stage being located just down from the reception amongst myriad trees, the beach bar facing the stretching blue carpet of the Adriatic dotted by revellers sat on inflatables, with several other DJ booths being located around the site. Cocktail in hand, we soak up the atmosphere by the beach bar as the sun dips in the sky before Theo Parish gets things underway with a brilliantly deep and evocative tech/house set before we make our way to the nearby open-air Barbarella’s disco to dance under the stars to the beats of Levon Vincent until the fatigue of travel takes us, and we make our way back to the apartment.

Much of the second day is missed exploring the remarkable Krka National Park an hour away – with its beautiful natural waterfalls and starkly beautiful colours, but we arrive back in time for a tremendous set at the beach bar by Last Waltz DJs and Adam Shelton to carry us on into the night. Wednesday gives us more opportunity to take in the atmosphere and surroundings.

The clientele for The Garden Festival is younger and more energetic than I expected (complete with bronzed skin and toned physiques by the beach) but in contrast to so many UK events of a similar demographic, the atmosphere is thoroughly friendly and pleasant – people chatty, inviting and appreciative of the surroundings. Consequently, what transpires is the festival equivalent of a house party on a summer’s day – relaxed, joyful and celebratory in comfortable surroundings, emphasised by the euphoric reaction to Francois K’s Barbarella’s set in the evening, closing the festivities for some. We however, have much more to come.

The crowd for Electric Elephant is unmistakably older and more laid-back that Garden's, and for the most part, the music reflects this. Hammered beats and dirty undertones are part-replaced by a more Balearic sound and groove-based atmosphere, although the heavier beats are never far away when required. Thursday also gives us the opportunity to get our first taste of the fantastic Argonaughty boat parties, which really must be experienced to be believed. Basically, a group of 200 people set off on a large wooden boat complete with DJs and decks on board. Prosecco flows and sweat drips as Horse Meat Disco play a terrific disco-infused set and despite a brief rain shower threatening to chase us, the sun fights it off and we spend four hours dancing on deck as the Croatian islands fly by us. Stepping gently back onto land after the party (sea-legs and prosecco not necessarily mixing!) we head straight to the beach bar for a brilliant disco/house back-to-back mix-up from 2 Billion Beats and Billy Scurry under the stars, before we eventual succumb to happy exhaustion and head to bed.

Blazing sunshine characterises early Friday as we stroll into Tisno, before we stroll along to hear Homegrown DJs and Leon Sweet play a gorgeous mix of laid-back beats and sweeping grooves for a couple of hours, before it’s time for another boat party. This time, it is the turn of The Unabombers’ (who helped start the festival off) Electric Chair set – a joyous mix of disco, funk and Chicago house amongst crowds of happy people, including yours truly who happened to pop the question to his girlfriend upstairs on the boat at sunset. Thankfully she says yes (might have been a rather awkward weekend if she hadn’t!) and the crowd and the boat and the DJs are wonderfully congratulatory as we sail into the night. Coming back onto land again, we head straight to Barbarella’s disco for another wonderful, pumped-up set from Horse Meat Disco and Motor City Drum Ensemble to close the day out.

Saturday morning is spent taking stock of sore heads and empty stomachs before we head on board Kabal and Ashley Beedle’s boat party in the early afternoon – sunny and celebratory house and funk vibes massaging our tired limbs as the blazing sun beats down upon us. We moor a little way out and the boat is actually swaying with people dancing – it’s a remarkable sight to see. Back on land, Emperor Machine and Balearic Mike slowly build the atmosphere higher and higher before Norman Jay MBE plays a typically wonderful and life-affirming set of classic soul tunes to finish the night off in style.

As Sunday looms large and thoughts sadly turn towards home, there’s still time for one final blow-out as the initial thunderstorms clear to reveal blue skies. The last of our Croatian Kuna are spent at the cocktail bar before a combination of Justin Robertson, Jim Stanton and Tom Findlay from Groove Armada steadily take us up through the gears before a quite remarkable set from Francois K blows everything into a mass celebration of dancing.

There’s then a trip across to the main stage where following a brilliantly energetic set, Il Bosco brings the metaphorical roof down when he finishes with Pharrell Williams’ ‘Happy’. Not quite finished, we catch the last taxi to Barbarella’s for an astonishing techno set from Derrick May finally empties our wallets and energy banks, as we get driven home into the daybreak with a sense of joy and exhilaration.

What you get from both The Garden Festival and Electric Elephant is an experience utterly unlike any other – the combination of a sunshine beach holiday, fantastic music and unique, unforgettable experiences such as the Argonaughty boat parties. Added to that is the genuine camaraderie of the people present – in seven days I never experienced one single bad attitude or aggressive disposition, something almost unknown at UK festivals. If the truth be told, being miserable in amongst such joyous, idyllic surroundings, there’s surely something wrong with you.