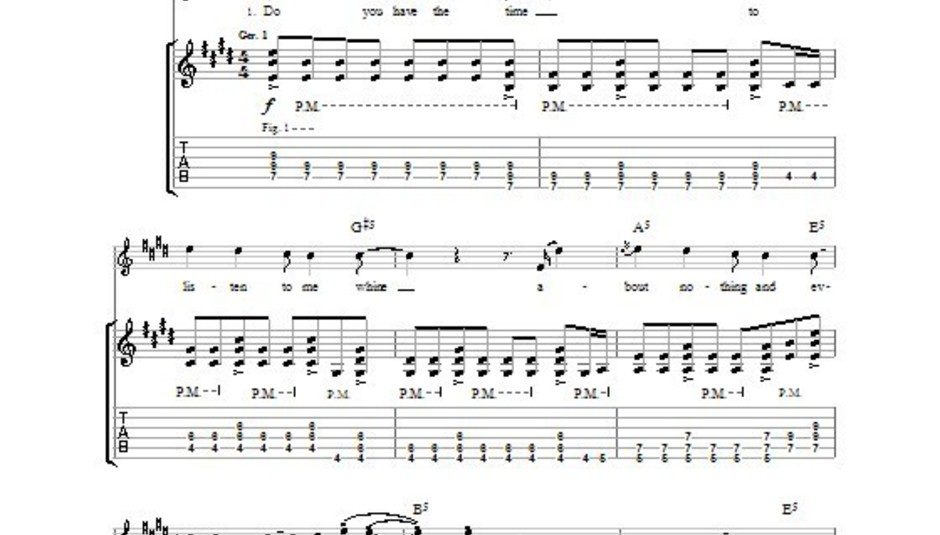 In November 1994 Green Day released 'Basket Case', the third single from their third album, Dookie. The melodic punk-pop gem spent five weeks at the top of the US Modern Rock Tracks chart and was the band’s first UK top ten hit. Six months earlier A & R man Rob Cavallo had heard a demo of the song and promptly signed the indie punk revivalists to the major label, Reprise. The band has since gone on to become one of the world’s best selling artists of all time, selling over 75 million records. Beyond its commercial success 'Basket Case' was also critically acclaimed. The New York Times describing it as “...fast, funny, catchy and high-powered.” BBC Radio One listeners voted it “The Greatest Punk Song of All Time” in 2006. Missing from any of the appraisal was mention of the chord progression, which closely mirrored a piece of chamber music written in the seventeenth century by Johann Pachelbel, Canon in D.

Oasis released 'Don’t Look Back in Anger' at the peak of their short-lived world domination in 1996. The NME voted it number one in the “Most Explosive Choruses Ever” chart, and Q Magazine voted it the 20th greatest song of all time. Songwriter Noel Gallagher has regularly acknowledged his plundering of other’s music, and even admitted that the song’s opening piano riff is “about 50%” stolen from John Lennon’s “Imagine.” He didn’t mention how the song also utilizes the same chord progression as Pachelbel’s, with a slight variation in the final bar.

The regurgitation of this chord structure in the pop music of the 1990s is remarkable. Beyond Oasis and Green Day the sequence could be found across the charts, in every genre: Aerosmith’s 'Cryin’' (1993), Tupac’s 'Life Goes On' (1996), Coolio’s 'C U When You Get There' (1997), Spiritualized’s 'Ladies and Gentlemen we are Floating Space' (1997), Belle & Sebastian’s 'Get Me Away From Here I’m Dying' (1996). The chords in question, when played in the key of D Major as Johann intended, run through D major, A major, B minor, F# minor, G major, D major, G major and A major.

Beyond folk singer Ralph McTell’s 'Streets of London' (1974) few examples of the chord sequence can be found before 1980. This maybe because Robert Redford’s directorial debut, Ordinary People, released that year, used the original chamber piece as its theme. This score was splashed all over the 53rd Academy Awards as the film won four Oscars, including Best Picture. This may be when the descending chord sequence was definitively reintroduced to western popular culture.

Beyond its prevalence in the charts, what’s more noteworthy is that many artists who used the sequence created their biggest (and in some cases only) commercial hit in doing so, such as The Farm with 'All Together Now' (1990) and Vitamin C’s 'Graduation Song' (2000).

There is also something in those eight chords that inspires communal singing among large crowds of young men. The Village People’s 'Go West', popularized by The Pet Shop Boys in 1993, is chanted every week by thousands of people in unison, with varying lyrics, in football stadiums across Europe. Variations include “One-nil to the Eng-Ger-Land”, “Stand Up if you hate Man U!” or the German’s slightly less vitriolic “Steht auf wenn ihr löwen seid!” (Stand up if you’re Lions!) The aforementioned “All Together Now” by The Farm is also prevalent in the terraces and was actually licensed by Everton Football Club as their official song in 1995, and again by the England team in 2004. It also happens that “Don’t Look Back in Anger” is the only song for which on an entire world tour in 2009 Noel Gallagher would turn his microphone to the arena (Oasis fans have often been compared to a football crowd), to let them take the lead vocal.

Unlike Jazz, pop music works because of repetition. From repeating the same melodic and lyrical phrase three or more times to form a catchy chorus (“Lucy in the sky with diamonds! Lucy in the sky…”) to then repeating that chorus three or more times within the same song. Even if the listener hadn’t heard the song before, through repetition of the phrase they may be singing along by the last chorus. The next time they listen they’ll sing along on the first line of the first chorus, and when people sing along, records are sold.

The repetition = money formula works beyond the confines of a single hit. When music is made for a purely commercial reasons, and not artistic, the “cover version” is invariably called upon. The commercial side of pop music is nowhere more prominent than on television talent shows. Eight of the nine winners of the UK X-Factor released cover versions as their debut single, all were number one hits.

Of course, unless you are Jimi Hendrix, there is little critical adulation given to covers, but what if you were able to utilize the inherent commercial advantage of selling repetition, while still releasing an “original” piece of music? You have likely given yourself a head start. Listeners may not be consciously singing along to the melody on the first listen, but they’ll probably be humming along to the descending chords.

Trying to analyze the composition of punk music structurally is akin to grammatically deconstructing Dr. Seuss: it’s futile and misses the point of the art form. Kurt Cobain said, “Punk music is freedom, it’s about doing and playing what you want.” If that freedom means lifting from an old piece of classical music, it shouldn’t matter, that’s the point of punk. Furthermore, there is no plagiarism without intent, and only Billy Joe Armstrong himself could say if he was aware of Canon in D when he wrote the lyric “Do you have the time, to listen to me whine?” over a string of chords for the first time. Maybe he had just watched Ordinary People.

Some artists have acknowledged the plagiarism explicitly in their composition: Coolio’s 'C U When U Get There' actually starts with a ten second sample of the original string piece before the sound of a record being scratched followed by a hip-hop beat, and a continuation of the same chords. Music lawyers contend that simply reusing a four-chord structure is fair game, and too common to infringe copyright, but an exact progression of over six to eight chords, as is the case here, is harder to defend as chance.

Regardless, in the case of Canon in D legality is not in question as copyright disappears 70 years after the author’s death. Johann Pachelbel died in 1706 as somewhat of a one hit wonder himself, except it wouldn’t be a hit for around 300 years. Some historians contend that he wrote the piece in 1694 for his friend Johann Bach’s wedding day, fittingly enough, since 1980 Canon has been the most commonly played wedding song, after the Wedding March.

The baroque era piece is taken from Canon and Gigue for 3 violins and basso continuo. It was unplayed for years - only a single manuscript of the work from the 19th century exists. It was first published in 1919 but did not become popular until the last quarter of the century. As far as the pop charts are concerned the influence was far more apparent in the 1990s than any other decade. Despite its last showing in the charts in 2000, the descending chords live on elsewhere. Whether a football fan singing “You’re shit and you know you are!” in unison with fifty thousand others makes the connection with the string quartet accompanying his sister walking down the aisle, is hard to say.

This phenomenon of a piece of art being appreciated in a different era than it was created is not uncommon in literature (Kafka, Thoreau) and the visual arts (Van Gogh, Vermeer), but much more rarely seen in music, certainly not with the extended period of dormancy, followed by short period of cultural saturation found with Canon.

Whether the Canon chord progression endures into the 21st century beyond wedding ceremonies and football games remains to be seen. Maybe it will lie dormant for another century or more before another popular resurgence. What's clear is that be it through a succession of plaigerisms diverging from the same source, or a series of isolated coincidental acts of songwriting, for one decade in at the end of the 20th century, that chord sequence was embedded in the public consciousness, whether they knew it or not.