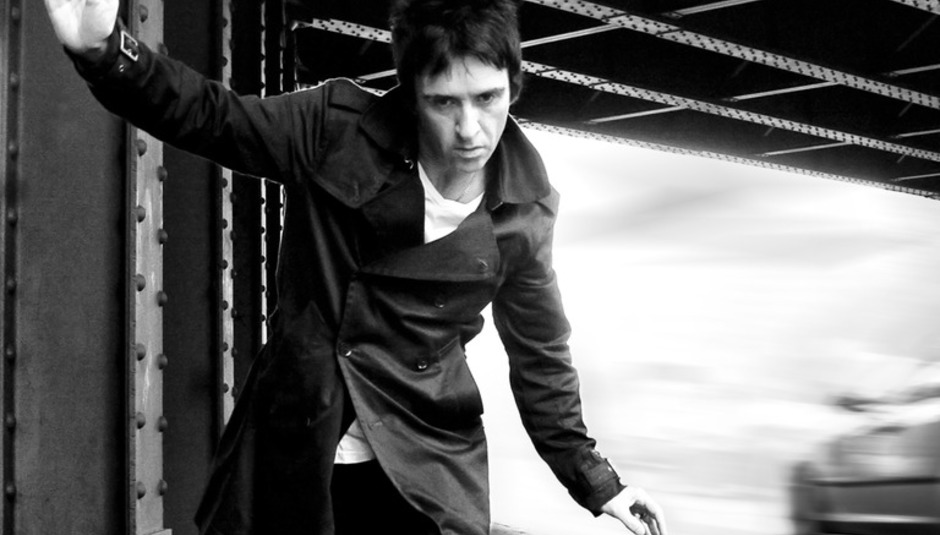 Johnny Marr is quite clear that what he does is pop music. And pop, emphatically, is no dirty word.

“When it was finished a lot of people around me were asking me what the record was about. Amongst other words I used the word ‘pop’”, he says. “I’m totally aware someone can argue that pop means what’s in the charts, but chart music has become a mutated genre of its own - a cross between high street, house music, and drum n’ bass with some pretty terrible X-Factor sort of singing over the top of it. Or some even worse R and so-called B. So it’s a million miles away from what the guitar can do as a pop machine, which is what I believe my guitar can be. It’s a machine to make pop music, and it’s an electronic instrument.”

Johnny Marr is ace. You can say with some accuracy that Johnny Marr is one of the aceist figures in music. He’s anonymous enough to have never been the pin-up. Instead, he’s been the power behind the throne with whoever he’s been collaborating, keeping him grounded, despite having played on some of the best pop records ever made. He’s so affable and so talented you can understand why absolutely everyone has wanted to play with him, from Talking Heads to Girls Aloud. What’s more, he’s managed to latch himself onto every indie age since the mid 80s, and do so credibly, lending his chiming guitar blessings to successive pop generations. And clearly a smashing fella. Ace.

But he was talking about pop music, wasn’t he... “All the bands I’ve been in, we’ve regarded ourselves as definitely alternative, but every one of those bands, at some point or other, have made music that we would be proud to call interesting pop”, he says. “So, with my record, when I got the opportunity to do things entirely the way I wanted, I just did twelve of them. For most people a solo record means doing the big long slow one with the orchestra, or ‘now my experimental electronic one.’ It amuses me that I do a solo record and it’s just twelve banging guitar pop tunes. I’m happy about that.”

So, a Pop album. His first proper solo project, and no - we’re not counting the Johnny Marr and the Healers record, which a) was the result of lengthy jams and collaboration between three musicians and b) sounded like the Seahorses. And if you’ve forgotten who the Seahorses were...well...exactly. The Messenger isn’t forgettable. It’s not indulgent either. It’s a big, shimmery, satisfying rock/pop record and it’s full of bright, treble-y guitars that are unmistakably Johnny Marr.

One of the considerations I had when I was making the record... there were only a few but I really wanted to stick to them... was if I do something that sounds like me, and it has a genuine feeling of authenticity, don’t erase it... don’t bottle and say ‘I’ve done this before’, if you like it and fans will like it, go with it. Don’t say ‘oh man, does that riff sound too much like a Johnny Marr riff?’ I’d think ‘so what? Fuck it if it sounds like a Johnny Marr riff’. Stick to your consideration. Where as in the past I’d have been like ‘oh no, that’s too obvious’, there comes a point where you have to drop that shit.

It’s a record that’s been floating round his head for some time, originating in song titles, themes, and scraps of lyrics across his last stint with The Cribs, a piecemeal writing approach he’s apparently had since his school days. “When I stopped writing songs and lyrics in my teens because I wanted to concentrate on being a guitar player, I never stopped writing down titles or bits of prose or stupid little poems”, he explains. “I worked for a long time on thinking about what I wanted to communicate to people, and just as importantly what I didn’t want to communicate. For example, I’m not the sort of lyricist who feels the need to talk about my feelings. I don’t think it’s that interesting. Unless you’re profoundly good at it, I don’t care about hearing peoples feeling in lyrics. My favourite lyricists aren’t singing about their feelings, they’re singing about their environment.”

Johnny Marr hasn’t done soppy love songs. The Messenger is a record that’s actually about things. Perhaps being in bands with a succession of writers who could articulate ecstasy and emotion so well (we’re thinking, obviously of Ryan Jarman and Bernard Sumner) that it makes sense for Marr to head in the other direction.

“The subtext there is that we fetishize technology incredibly”, he continues. “So even though it’s a surreal story underlying, that is something I think about life, which is that we fetishize technology to the nth degree. I do it, and I assume that people that follow me will relate to it too. Even with the more autobiographical songs, of which there are only a couple, ‘New Town Velocity’ and ‘Generate Generate’... even those songs aren’t about my feelings. ‘Generate Generate’ is saying I think too much and it gets in the way, and I’m assuming there’s plenty of people hearing it who are going ‘I know what you mean Johnny Boy’. ‘New Town Velocity’ is just a very very idealistic song where I used an autobiographical situation - the day I decided I was going to leave school and very shortly leave home when I was 15... to describe a feeling of great empowerment and being free. Those amazing moments in life. if you’re lucky enough to have them, where you’re thinking ‘I’m in control of my own destiny, and I can shape the world the way I want’, not in some horrible Nazi way, transcending that. Feeling empowered. And that still has a lot about towns and cities, and buildings, speed. Aside from those two songs the albums very much about the experience of being in cities and towns, and hopefully in a way that other people can relate to, of growing up in the UK”.

One of the great things about The Messenger is that it seems to visit his entire career. Lyrically, it may not be entirely autobiographical, but musically it is. There’s shades of his work with Electronic here, of the the shimmering guitars he lent to The Cribs, the sharp angles of Modest Mouse, some post pop soaked up from The The and some funk imbibed from Nile Rodgers. It’s a journey, not just through cities, but through Marr’s working life. “If there was a musical agenda behind it”, he says, “it was to evoke the spirit of who I was just before I formed The Smiths. That’s the rough agenda musically, so if I had to analyze it, it’s half who I was since I joined the Smiths, half everybody I’ve been since I got on my own”.

And there’s the rub. Johnny Marr was in The Smiths. There’s not really much getting away from that. For his sake you can try, but you’re fooling no-one. When you see the name Johnny Marr, it’s not The Healers you think of first. That’s one of the good things about The Messenger, after years of trying not to sound like ‘Former Smiths guitarist Johnny Marr’ there are places where this record could actually be a crisper, zingier version of that band. Marr is finally being himself, and part of that is admitting that, yes, he’s Johnny Marr from the Smiths. “It doesn’t seem that long ago that I was a struggling young guitar player who was just desperate to be heard”, he says. “Just getting heard was the most important thing. If you’re a writer you just want people to read it, if you’re a dancer you just want people to see you perform, that was the thing that was frustrating for me every day, it wasn’t that I wanted to be super famous and make tons of cash, I just wanted to be heard, to be appraised, particularly by my own age group or people who like me. I’d been told for years that I was a really unusual guitar player and that I was really good, but you want to be validated for what you do. And that could have not happened for me. And because it did, to sort of complain about it happening in a really big way would be pretty ungracious of me I think. It would spoil it for everybody who loves the music.”

“I’ve been in bands that I really love, and without being in The Smiths I would maybe not have been in Modest Mouse”, he stops... “actually that’s not entirely true, I got in Modest Mouse because I’d played with Talking Heads, it was nothing to do with the Smiths”, he shrugs. “But I’m really proud of it. I’m okay with it. The reason it doesn’t feel like a weight is that people love the music so much. How great is that?”

I know what you mean, Johnny boy.

The Messenger is out now.