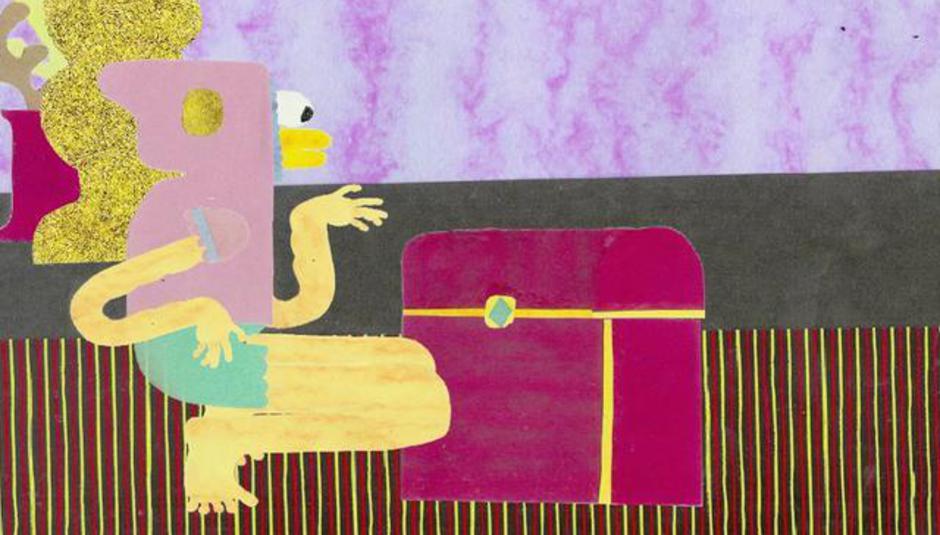 As we live in greedy times, I am not ashamed to tell you that split sevens, done well, are fast becoming my favourite format. Because it distills all the things I love about brash three-minuters and then gives me another brash three-minuter, for free – all of which appeals to the bargain-hunting, crap-hounding cheap ferret I am. And though Hooded Fang won’t find their lyrics immortalized in a smartly endpapered pamphlet [doyousee I am saying they are not poetry doyousee] it doesn’t really matter, especially when they are in the business of part-curating a seven of throwaway songs. Their contribution is a strange confection, marrying some twangy riffs with a tale about a performing girl who doesn't fool Hooded Fang for one second.

Meanwhile Pinkunoizu promise that ‘Like an endless loop / Of American troops / I will come for you’ over the rubbishy squelch of a synthesizer demo. Despite this backing track sounding like it could quite easily accompany a cat skateboarding its way out of a cardboard box that also contains some hatching sloths, it is oddly moving. Somehow the carefree approach of both bands adds up to a lovely whole - the general air is that this is music that has been snatched, and not over-thought; a becoming sort of creative insouciance.


The Black Keys - ‘Gold On The Ceiling’ (Nonesuch)

The Black Keys are a big retro, you know, a bit seventies. And it’s a bit like when you find yourself googling for a ‘vintage fridge’ for your Mum because Smegs are so dear, knowing that the internet monster needs feeding with keywords; but concurrently aware that the words it wants are too terrible to type - ‘retro’ and ‘vintage’ being two of the most vile. Which is of course why I use them for the accursed Black Keys, with their gateway band riffs and their honking rock clichés. The thing is, I get it, man, I get it. I recognise that just as everybody needs somebody to love, everybody also needs an anachronistic band to call their own because liking what your Dad/older brother likes is too, too boring. And I quite like ‘Gold On The Ceiling’. But I like it in a vacuum, where all knowledge of rock is wiped from my tiny mind, and where I never heard someone sing ‘wawna’ for ‘wanna’ before, or ‘allri’ for ‘alright’. It’s a bit like when someone says, ‘What we’re going to do, right, is style our CD promos so they look like vinyl records, with the grooves printed on them?’. And I go, ‘Great! And why would you want to do that, then?’. SO RETRO.

Oh Batida, save us from the perils of indie rock reviewing and its (frankly bizarre) random-generator rock lexicon (or lexicawn as The Black Keys might have it). Take us, Batida, to a place where Angolan semba music from ‘the seventies’ has not just been rehashed for the benefit of childlings, but re-purposed with the technology of now, and also coupled with the beats of Kudoro. To my mind ‘Tirei O Chapéu’ is not perfect because it don't push things far enough, but it did make things happen in my brain. And it was quite nice that those things were not stood in front of Marshall stacks, wearing jeans they had forgotten to wash on purpose.

Needless to say, ‘Tonight’ is not Moombahton, it is an innocent and slightly arms-length paean to going out and putting on your make-up and HOPE and CITIES AT NIGHT and DOWNTOWN. You will not be surprised to learn that it is accompanied by a video in which the bright lights of London are romanticized to the point of absurdity. My feeling is that Saint Etienne’s ART is about knowing that the world they document does not exist - but they make this ART for the edification of people who still believe it DO. Which is to say, grand romantics, lost causes, hopeless cases. I’ve always found them (OLCBYH permitting) a little too arch, which is why I was horribly pleased to catch them in the act of briefly intertwining the two narrative strands of their video – one of which has Saint Etienne playing a ‘gig’, and one of which has two teenage girls going at on the tan. Because at one point, they sort of make it look like the girls are at the Saint Etienne gig. Which is when this old lady goes, ‘Look, YOU KNOW and I KNOW, everyone at your GIG is OLD’. Granted, it’s a tiny misstep.

Allo Darlin’ are backbackBACK and they have (oh my sweet lord / whatever next) recorded a plaintive, jangly, knowing pop song about longing for a place that doesn’t exist apart from in their own minds but they long for it anyway (romantic) despite being aware such longings are always fruitless (cynical). Which is all very UM, HANG ON unless you find Elizabeth Morris’ voice delightful because it has perfect, equal amounts of tiredness, restlessness, romance and boredom. The lyrics on ‘Capricornia’ could be sharper but then, sometimes I get the impression Allo Darlin’ are about capturing the wisp of a notion of an idea of a feeling - rather than having it tattooed on their person, like walking manifestos. Can you imagine, readers, going to bed with someone, and not knowing they had ‘What doesn’t kill you makes you stronger’ inked upon their back, until you were actually ‘in the act’? AAAAAAAAAAAAAAAAA.

Quite a lot of videos these days seem to be about GuRlZ iN pEriYLE. And Karin Park is no exception, because in hers she has just got her first flat and escaped the horrors of the houseshare, only to discover that beneath the woodchip lies a spooky Indian wooden box that parps smoke and makes creepy Japanese girls stand really still really far away in an empty space so that when you film them with a camera from behind two door frames they look a bit nuts. Of course, everybody knows that when you see a Japanese girl with no stuff around her in the middle of some emptiness then that means she is well about to come out of the telly to use your toes as toothpicks - so this in turn means that Karin must now run through some woods and get into a lift with a dirty great bunny who is also just stood there like what, like what. None of which stops ‘Fryngies’ from being an excellent, doom-lite pop song that hails from the general ballpark Karin Dreijer stabbed a flag in about three years ago. I’ve tried putting ‘Fryngies’ into Google translate and am disappointed to find it is not Swedish for what our American cousins call ‘bangs’.

This here jam is appealing to the part of me that likes fully-formed, unabashed trance-house pulsers; the bit that likes phasers and whooshes and producers who are not too embarrassed to give you phasers and whooshers in the right order. ‘Falling Star’ ebbs and flows in exactly the way I expect it to and it is bloody predictable but that is why I bloody liked it. It’s also got a video made up of wicked visuals of like, space and that.

Real Estate’s video is about The Machine, man, it is about the nonsense that surrounds The Music, man, and why it is nauseating that one must participate and become a cog if one really does want one’s music to be played on the radio or talked about ‘on the internet’. ‘Easy’ is a nice song – if a bit of a waft – but it is slightly undermined by the fact that I had to watch it ‘on the internet’ above a comment from someone calling themselves ‘stranglechrist204’ (wooooooo, rebel) who put ‘Love this fucking bad. Almost as much as my girlfriend loves not giving blowjobs.’ Which is a) grammatically incorrect and b) not much of a riddle, because you can’t blame a lady for not wanting to put a wang near her face when said wang belongs to an illiterate YouTube commenter. Oh the irony, oh the aggressively de-cal’d van of the amusing Street Teamers in Real Estate's excellent video - which ends nicely, like all stories should, when the devil’s workforce decide to do something less boring instead and respectively ‘joins the parks department’, ‘learns to read’ and ‘goes home to they wife and kids’.

I have finally found a Cass McCombs record I like and it is all very hurrah because it has been a long road, involving pointless explanations where I pointlessly describe how I can see how Cass McCombs is good, and proficient, but it just isn’t happening, for me, you know? Until ‘Love Thine Enemy’, which is more simply constructed than a LACK table and all the more warm for it.

Wendy is on the internet, here. ‘She’ dreams of a world where nothing on the internet has a comment box under it. Especially the flipping broadsheets, who are, if it is possible, even worse hit-baiting shitehawks than ‘the rest of them’.