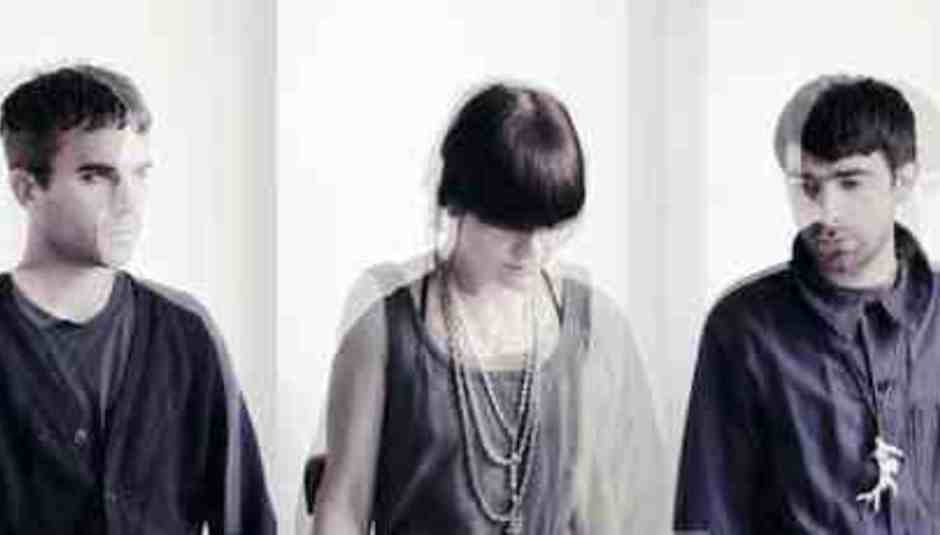 The Machine spat out some interesting words for ‘Two Different Ways’, and for once it was not all overtawk and overpromise; for once I was reading a thing about a song and finding myself in agreement. ‘Restraint and release’ it said, ‘simultaneously bewitching and very nearly indifferent’ it went on, and while I was trying to work out just what is so beguiling about the idea; dancing all in white to relentless synth lines, snares that have the air of the slap but the caress of a kiss, I distracted myself with some mild irk about what the squares never mention in their disdain for music from warehouses, and just how transcendentally calm those concrete walls were; how there was a truth in it, however chemically motivated it might have been. In any event, Factory Floor have a purity of approach that appeals to the minimalist I know I will never be – they show me there is something to be said for simplicity and not jamming your field of vision, ears and fingernails with a jumble sale’s worth of popular culture, because it is a good idea - if not actively wise - to grasp the remote with determined fingers and turn down the ragged mess that is modern life whilst simultaneously notching up the brightness, until all you can see is white light. Delirious.

Hyde & Beast - ‘You Will Be Lonely’ (Tail Feather Recordings)

The best thing about getting sent songs like those Hyde & Beast produce, is the general sense that the egos have been left at the door; which is why ‘You Will Be Lonely’ goes out of its way to dance a jig for your pleasure and amusement without worrying if you are giggling with it or at it. By all of which I mean, this is an incredibly jaunty single - if not an actual hoe down - and you are meant to have fun to it and sing to it and not worry if you look good in the pictures when they inevitably end up on Facebook afterwards.

Marshall McLuhan once said the ‘the medium is the message’ and strangely it is a Skream single that has put me in mind of this - he having written a UK bass pop paean to his unborn child. McLuhan went further of course, oh, he would go on, blethering about how the medium is just ‘a juicy piece of meat carried by the burglar to distract the watchdog of the mind’ which made this idiot think of how far UK bass has come, from excitable chats and swaps behind the counter at Big Apple, Croydon, to ‘Anticipate’. Which is just the most incredibly sentimental thing; with all its talk of how Skream plans to man up and ‘learn how to teach you,’ and ‘let the fool in me go,’ and ‘work like crazy, give you everything you need’. And this is all very well, but I am pretty sure Oliver will learn to his cost that when Skream Jr. is asked to pick up all his Moshi Monsters from the home studio floor ‘because Daddy needs to stand in front of some lasers’, ‘Anticipate’ just will not cut it; because they are not physiologically capable of reason until they’re THREE. And Mrs. Skream will still be in a mard about the line in which their baby is asked to ‘take your time coming through’. Mr. Dene Jones, we all, if were are honest with ourselves, want thirty minutes tops and an epidural. I wonder if he will play it at the birth.

If you are a woman in music at the moment it is very important to pick a side, otherwise you cannot expect to be included in a crass magazine feature that lumps all the kooky womens together under the heading Baroque Our World!1!!1!!!!! - before proceeding to ask all of them where they get their fucking shoes from or whether their feathered headdresses aren’t very heavy to sing in. Oh, songstresses. Anyway, hopefully Beth Jeans Houghton will sidestep all the fuss and honking so she can get on with doing things like ‘Liliputt’, which is one of those marvellous many-bitted, impressively chamber-orchestrated, soaring songs that makes me want to write spoof pitches to womens’ magazines just to see if they will commission a think piece on how my dad’s death from cancer helped me get a boyfriend ten years my junior.* ‘Liliputt’ is also wonderfully restrained, despite having quite a bit of drama in its pockets - rather like an am-dram cast who have learnt that stage make up and black-ringed eyes is not really necessary, when you are only playing to the village hall. Really good.

Much as I like Summer Camp, I must admit that a tiny part of my heart remains unmoved, all that captured longing and the pickling of past sounds and the sheer, ruddy pitch-perfect air of their work makes me long for a few more imperfections - even though I am thinking this is very much Not The Point Of Summer Camp, if I may dare to posit a little. Anyway, this is very much my problem, and something to do with how perfection makes me feel slightly spooked; like looking at an immaculately papered wall, and longing for an unstuck corner to tug on. Even so, ‘Down’ is brilliantly, triumphantly sad, and has an excellent video in which someone flicks a jelly (which for some actually quite obvious reason strikes me as rude).

Marketing geniuses Stay+ (The Band Formerly Known As Christian Aids Which Is A Name Some People Found Annoying If Not Actually Offensive But That Was All Part Of The Plan So Shut Up) have ramped up their vision (NVQ in Communication Studies) for release number two. Which is called ‘Fever’ and which the press release feels it is important to mention in the same breath as David Lynch and Kraftwerk (and if you are playing Press Release Bingo, do feel free to shout ‘House!’ now). It’s not as good as ‘Stay’ or ‘Young Luv’ and yes, I am still annoyed with them even though THAT IS EXACTLY WHAT THEY WANTED.

Guitars with an acidic, lemony twang and a stomp to the chorus mark out ‘Holding Nails’ which - like all the best things - is less about junior DIY jobs to which you are demoted when your Dad is in charge than it is about heartache. And even though Weird Dreams have been listening to Smile session outtakes in which Brian Wilson gets all aggy because nobody is working hard enough at being sweet, this is not a criticism. There is some nice achey croon on this single, but the lyrics let it down a bit; a 'Polaroid in the fire' and 'sun on your back' are just a little too Tumblr for a song with an air as candy-sad as this one.

Though I realise this is not necessarily DiS-shaped, I feel it is important to point out that I have had a minor breakdown upon researching MNEK this morning, especially when I discovered that he worked with Xenomania while doing his GCSEs. Old People: it’s pronounced ‘em-en-ee-kay’. And if you like it you will spoil it for the younglings so just hate it like you’re supposed to and put on Tilt, even though secretly you know Tilt is made of arse and Scott Walker doesn't say he doesn't listen to it because he is only interested in the recording process but because it is FUCKING RUBBISH.

I am looking at this video and I am thinking about Twilight. And not just the bits where the weremen forget to put their tops on. If this song does not land an embarrassingly lucrative sync rights deal before the year is out, I will eat my bonnet.

Pleasant ramshackle indie with the sort of keyboard lines Altered Image wouldn’t flip the Vs at.


Wendy is on Twitter, here. *Her dad is alive and well and built like a brick shithouse.