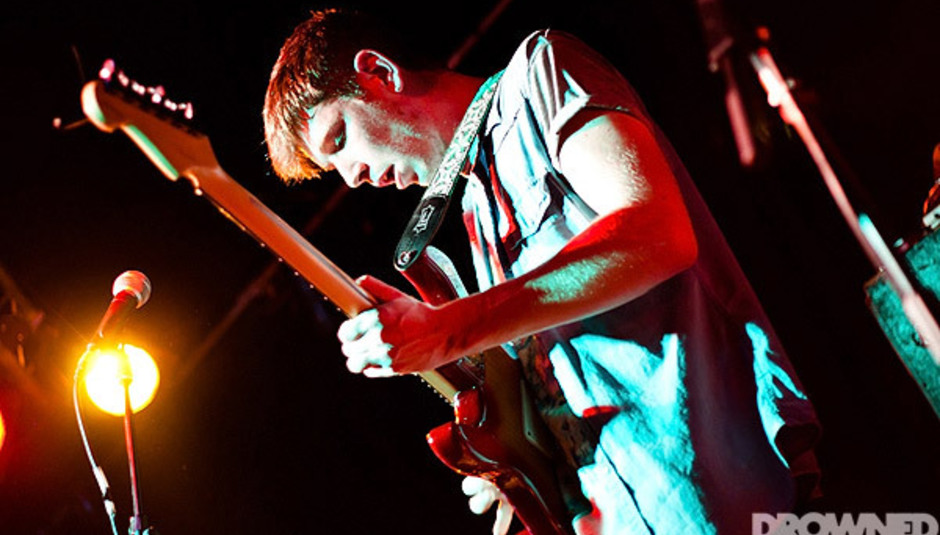 Hot on the back of September's local scene report and gig guide from Nottingham and the East Midlands, comes the bumper sixth installment from DiS' man in the city...

After a heavy season of festival action it's back to the domestic gig circuit for the rest of 2011. With the likes of Splendour, Dot To Dot and Hit The Decks having all attracted large crowds this summer, each one promises to return next year bigger and better than ever.

That's not to say there aren't a couple of locally organised DIY events we feel obliged to tell you about. First up is the excellently monickered Hello Gore III Halloween bash organised by the people that run Hello Thor Records. Once again taking place at the Old Moot Hall (1 Thoresby Street), Sneinton, this year's line-up features We Show Up On Radar, The Cusp and Moscow Youth Cult among a host of acts confirmed to play, and tickets cost just £3 in fancy dress or £4 without.

Meanwhile, Ladyfest, the female orientated all-dayer curated by all-girl punk trio The Smears returns to the city next month. Taking place across a series of venues in the city's Mansfield Road area, expect to see an array of the best female talent in music, literature, performing art and comedy, along with workshops, exhibitions and craft fairs.

With certain bastions of the national print media recently taking time out to focus on what Nottingham has to offer quite recently, it really is an exciting time to be in the city and this month we've a host of new artists, releases and live shows we're just itching to tell you about.

In the meantime, check out this awesome podcast from NUSIC.ORG.UK founder Mark Del, which compiles some of the best up and coming artists Nottingham has to offer at this here moment in time.

We'll start this month's ball rolling with four exciting new releases from those fine people at Gringo Records, also responsible for putting on shows as Damn You! First up, is the new album from local post-rock combo Souvaris, whose last release we awarded a quite healthy 7/10 on these very pages. The album is out this week (Monday 24th October) with a special album launch show at Nottingham Contemporary Arts Theatre on Friday 28th and is available from Souvaris' bandcamp page above.

Next up, is Mountain Language, the new six-track album from Brighton noise combo I'm Being Good. Now veterans of the UK post-hardcore scene having put out their debut album as far back as 1998, Mountain Language will be their first release for Gringo and we have it on good authority that it's a corker. Listen to the full album below...

Finally, two more releases from Gringo involving Leeds-based pair That Fucking Tank and Hookworms respectively. The former's Obscene Baby Auction is the long awaited follow-up to 2005's Old Baby Sex Scene while the latter's self-titled EP on heavyweight twelve-inch vinyl has got us here at DiS hot under the collar, harking back to the psychedelic garage of people like Comets On Fire and Zen Guerilla. Listen to the Hookworms EP below...

Another of our favourite labels in the East Midlands, Denizen Recordings have a couple of exciting releases coming up in the none too distant future. New signings Kappa Gamma are currently recording both their debut album and a three-part video story to accompany their next three single releases. Here's a live version of 'Wentworth Villas' as an appetiser.

Alternative folkers Injured Birds have also just put the finishing touches to their first long player, expected to be out in the early part of 2012. Here's the haunting 'Hate To Make This Last', recorded earlier this year.

Denizen have recently teamed up with Faley from Late Of The Pier, moving towards creating a management and development team to run hand-in-hand with the label. With the expertise and excellent facilities offered by Confetti and Electric Mayhem studios, expect to see their name with several other up-and-coming local artists shortly.

Another of their acts, Origamibiro recently put out their second long player Shakkei in July, and will be releasing a remix album of the record featuring artists such as Plaid in the coming months. Here's a sample of what to expect.

Having come to our attention a few months back, Without Maps follow their recent split cassette only release with fellow noiseniks Samoans with yet another single on their own 49s vs Dolphins label. 'JCVD' will be out in time for the December Xmas rush on limited edition cassette, mini CD and digital download. Here's an exclusive look at the accompanying video.

One band that's been creating a few ripples of excitement across the city in recent months is Fresh Eyes For The Dead Guy, which features at least one established DiSser among their ranks. Although initially released in the summer, their most recent composition Blue Harbour is well worth a listen, while the band embark on their first full UK tour in the early part of November.

Also making a huge noise for the right reasons are Kill Chaos, a three-piece borne out of the ashes of early noughties post-hardcore outfit Hinterland. While still in their infant stages as far as recordings go, their recent demo, recorded at Doncaster's Axis Studios over the course of the summer, offers two slices of biting anthemic punk that makes us think of The Wildhearts or Three Colours Red from back in the day. Check out 'Company Of One' below:-

COMPANY OF ONE by killchaos

Remember The Hellset Orchestra? Their excellent The Carrousel Awaits was something of a lost gem upon its release in 2008, with the band seemingly on indefinite hiatus ever since. Now, Hellsets frontman and songwriter-in-chief Michael Wetherburn has returned to the fold with his latest project, Ulysses Storm. Combining the vocal stylings of a young Frank Zappa with the musical eclecticism of say, Eels or The Black Keys, the three-piece release their new five-track EP Snake Cult next month, with the launch party set to take place at the city's Spanky Van Dykes on Friday 18th November. Listen to 'Franska The Bear' off the EP here, and then download Snake Cult's predecessor, also called Ulysses Storm, below.

A couple more self-releases to tell you about come from The Golden Troubadours and Boots Booklovers respectively. Whereas the former stick to the rootsy folk sound on their Silent Revolution EP gig goers around Nottingham have come to expect in recent months, the latter's The Captain Of The Ship EP owes a dept of gratitude to the likes of Morrissey and The Long Blondes, as well as an endorsement from fellow kitchen sink dramatists The Heartbreaks.

Before signing off for this month, it would be churlish to leave without mentioning two of the city's current focal musical ensembles. Swimming release the follow-up to 2009's The Fireflow Trade next month. Ecstatics International comes out on Tummy Touch Records next month, the band embarking on a short tour during the second half of November culminating in a homecoming show at Nottingham's Contemporary Arts Building on 25th. The album can be pre-ordered here.

Finally, next Monday (31st October) sees the release of 'Hands Down', the new release from Dog Is Dead, arguably Nottingham's most successful musical export in over a decade. The single is produced by Richard Formby, himself recently responsible for Wild Beasts excellent Smother, and comes backed with another new song 'Burial Ground' on limited edition seven-inch vinyl and digital download. On top of this, the band - fresh from supporting Bombay Bicycle Club on their UK jaunt - have also just announced their biggest headline show to date at Nottingham's Rock City on Saturday 17th December, tickets available here. In the meantime, here's the video for 'Hands Down'. As long-awaited follow-ups go, the second record by Nottingham six-piece Spotlight Kid has taken its time in construction, but after several listens proves to have been well worth the wait. While 2006's Departure was to all intents and purposes the solo project of former Six.By Seven drummer Christian Davis plus a supporting cast of several friends and acquaintances from within the city's local music scene, Disaster Tourist is a real collective effort that showcases Spotlight Kid as a potent force to be reckoned with.

Indeed this year has already seen them playlisted among the Adeles and Rihannas of this world on daytime Radio One, while their excitingly pervasive live show has transformed them from shy also-rans to genuine contenders not just in their own neck of the woods, but on a wider, more nationally recognised scale.

It's perhaps unsurprising then that in the current climate of 360 degree deals and half-arsed chancers playing at record labels, Spotlight Kid decided to take the bull by the horns and release Disaster Tourist themselves. Recorded at Purple Studios in Norwich earlier this year on a tight but affordable budget, Spotlight Kid's DIY ethos has paid off handsomely, each of the eleven tracks here highlighting a depth and nuance many outfits on major labels would rape their mothers to achieve.

Sure, there are moments where the triple guitar maelstrom pprovided by Rob McCleary, Chris Moore and Karl Skivington respectively threatens to hibernate and dissolve in the mix, but thankfully such blips are at a minimum. As with its predecessor, Disaster Tourist centers around the ethereal vocals of Katty Heath, now a fully fledged member of the band. If previous singles 'Plan Comes Apart' and 'All Is Real' demonstrate a harder edge reminiscent of My Bloody Valentine's Isn't Anything era, then 'April' and 'Creeps' augur a subtler approach not a million miles from M83's Before The Dawn Heals Us fantasy world.

'Forget Yourself In Me' and 'Freefall' once again return Spotlight Kid to more familiar distortion heavy territories, both ably characterised by Heath and McCleary's dual harmonies, undoubtedly a key element in the band's constantly developing sound. The real centrepoint and arguable highlight of the album comes in the form of 'Haunting Me', a six-minute opus of textured bliss that swoons and soars with a sophisticated grace and panache.

By the time 'Pulled Apart By Horses' drags Disaster Tourist kicking and screaming to a pulsating close, there's little doubt that Spotlight Kid's status as one of the most innovative bands treading the UK circuit is all but assured. Had a little more time and caution been spent on the production and mastering side of proceedings, goodness knows what sort of masterpiece Spotlight Kid could have had on their hands. As that's the only minor criticism here, they'll instead have to make do with a sturdy... (8).

29th October - Cuban Crimewave + The Cusp + I Am Lono + We Show Up On Radar - Hello Gore III @ 1 Thoresby Street, Sneinton

4th November - Drag The Lake + Taken By The Tide - The Maze

16th November - The Chapman Family + In Isolation - The Greyhound, Beeston