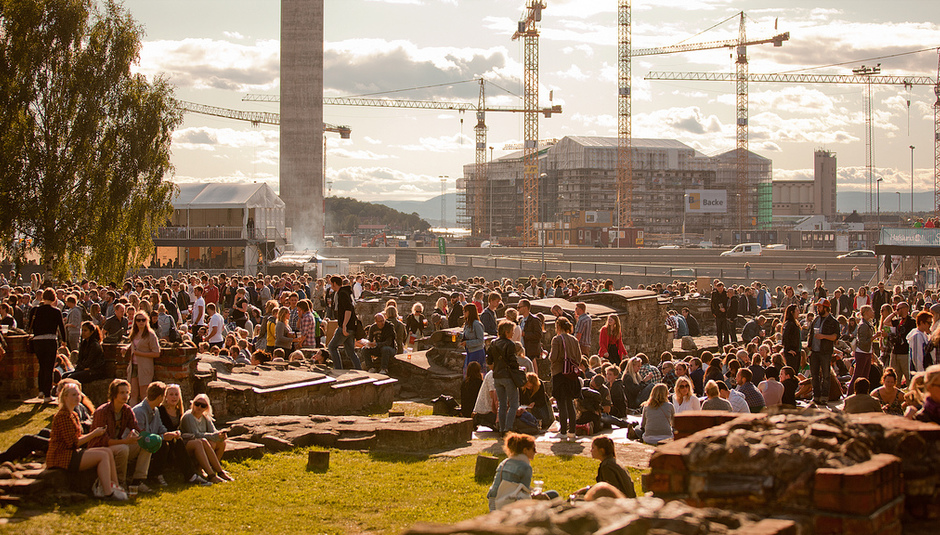 After a superb, mostly sunny and varied Wednesday and Thursday at Oslo's Middelalderparken, our attentions turned to the final two days. Tired, worn down but not yet exhausted, there was even more to come. Looking at the program in itself was overwhelming, especially if you had feet in the state of mine. In reality you can't do anything else but open the sun-baked festival with massively open arms. So, onto the more daunting prospect of trying to fit in everything that your heart desires. It wasn't all that easy...

Noah and the Whale's first album was reasonable. It had the single that was played to within an inch of everyone's life but it was nevertheless a great pop song. Then they had that second record which was really rather brilliant, in places. And then came the third, which is placed somewhere inbetween, even if it did have some truly dreadful moments. Today, of course, is a mixture of all of those and the gathered crowds even now extend to the waterside bank, which is a nice place to watch if not actually listen to the band strum along, hum along and take in these harmonies. It's easy to be cynical about bands like NATW, but being seeing it in a foreign land can take away the sharp edges, leaving a warm glow in instead.

Continuing in a fairly similar manner are The Jayhawks, who have been happy to tread the same furrow for many-a-year now. In doing what they do there is no shame, but only if you manage to do it as well as them. Despite the band being inconvenienced by a lack of regular drummer, they somehow manage to procure a Norwegian stand-in for this purpose. Did he know the songs already? It seem so, and there were no noticeable gaffes. You need not be all that familiar with their oeuvre to truly enjoy a set like this, in fact discovering what they're all about is most likely as enjoyable in this setting as in any, I'd wager.

The Pains of Being Pure At Heart live are often not a band to get terribly excited about. That is to say that they aren't terribly exciting. Despite this, things – including my perception of them – may have changed in the past 18 months and this afternoon there is something there that didn't appear before. Verve. Something beyond mere proficiency. It even was occasionally arousing, and doubly enjoyable. You do remember that 'This Love Is Fucking Right' is as good as they've got, but other songs do touch on their jangly indie-pop wonder. Tracks from their newer, arguably not quite as good, second album are more deliberate and less full of the joys of life but add a change in pace, toning down their inherent giddiness for something more sombre.

Back on the main stage, Kvelertak are the sort of thing that Norway has always done very well, continues to do so and probably will for the next few centuries, at least. You do, when you come to see music in this country, desire to see a heavily tattooed and bearded man growl into a microphone, running, jumping and climbing amidst a wall of guitars, bass and drums, the controllers of which are tattooed and bearded in differing levels. They may be on the main stage, but you just want to climb up there with them, lock arms and swing around like a grinning twat. Erlend Hjelvik breaches the barrier to basically do this, excellently. The band's self-titled record is almost highpoint after highpoint and that's how today goes, too. The screamed Norwegian lyrics are both important and unimportant in their context as you get what the band are about quite quickly. Still, it is hard to look past their rallying call of 'Mjød', with its Odin-referencing chorus blasting any fishburger crumbs out from wherever they may be hiding. Despite his rather embarassing performance on BBC's Question Time a couple of years ago, Jarvis Cocker is an erudite chap. Or at least he is a man that likes to talk. And talk he does. Amusingly and seemingly from notes, too. He quotes Ibsen and Blake, to a mixture of bemusement and acclaim. There was something of a nostalgic, more backward-looking approach with a few of the bigger bands on the bill, such as Guided By Voices and Sebadoh. Pulp clearly fit there as well, but you should leave any problems with that at the door and just revel in a joyous release of the band's back-catalogue. It cannot be faulted. What the crowd bays for, it gets, with enthusiasm. It can't be hard for Jarvis Cocker to get out of bed for things like this, no matter how fleeting the experience may be. For such shows, as long as the performance is at a decent level of competency everything else matters little, for it is the songs which people are here for, not anything else, not something different, something alien or something unusual, just the songs.

An attempt to run away from Pulp (before 'Common People', obviously) to catch whatever is left of Lykke Li proves almost entirely useless. There were plenty of people around, some deciding to do the same thing as me, but alas all that was audible was the final 30 seconds of 'Get Some', before a one-song encore which nobody really called for...word around site is that it was a good performance, though. Another day, another few layers of sun cream. If your band name contains a sonic description, you'd best live up to it. See: Rumble In Rhodos who, fortunately, do. As with Mungolian Jetset, they exude fun if not intensity and seriousness. Some parts are inherently naff, but their enthusiasm and generally large, rocky, high-pitched vocal choruses go some way to outweighing that naffness.

There are many singer-songwriter types in Norway, and there have been many over the years. Some stray towards the more unconventional and interesting and sing in Norwegian, whilst others straddle the middle ground quite comfortably. Much of it has never been that appealing or interesting to me, partly because it is so difficult to do anything truly out-of-the-ordinary and rare to find it. Get the important things right, though, and it's difficult for people not to warm for you. Certainly this is the case for the lanky Jonas Alaska, whose Americana-styled tracts are occasionally delightful and always pleasant, but rarely completely encapsulating. But again the festival have put an act in the perfect slot, which really makes a difference.

Upon reaching the final song in his set – dedicated to, if not actually about the victims of Utøya – something goes a bit wrong. The problem is that, no matter how loudly and intensely Mr Alaska strums his guitar, Cancer Bats are currently running through an exceptionally raucous rendition of the Beastie Boys' 'Sabotage' and yes, like much else on Sjøsiden, it is high in volume. People move closer in and he carries on, but the moment is lost.

As could be expected, Prins Thomas et Orkester take a while to warm up and, unlike a few of the bands playing Klubben this weekend, there isn't a gigantic queue to get in, although it is pretty full from the off. The richness of sound and pacing of the set from ponderous to groove-laden is just how it should be and gradually this group show they know how to hold a crowd, even if that crowd do begin to gradually disperse. The ones that were interested, anyway. Still, the deep-down joy that Prins Thomas creates with movements that gradually grab you by the balls, lolloping bass doing most of the grabbing. Ignoring something like that is difficult, it is true.

It is bizarre how a few factors can change a perception of a band. Now, Givers aren't doing anything which can't be done by plenty of others, and they aren't doing it in a way that nobody else could do. Yet sometimes, something happens deep down, and maybe it was alcohol and sunshine related, but their mixture of boy-girl vocals set around a vast range of other sounds, individual percussive breaks, heavy-synth breaks and uplifiting verse and chorus is intoxicating on a very base level. It may turn out to be one of those momentary things, but what a moment it was! Photo by Ole Haug for Aktiv I Oslo

It's funny. Funny meaning strange, not humorous. Nick Oliveri gets charged with some seriously serious offences in the USA, yet he's here playing with *Kyuss Lives!*, an incarntion of Kyuss without being Kyuss. A lack of Josh Homme is not a terminal problem and Oliveri seems little externally troubled by whatever matters he has in his – now-public private life. Kyuss Lives! are one of those things, like all that is supremely backward-looking, for which you have to forget yourself and any larger concept of what is right, what is wrong and what is worthy. Again, it comes down to the quality of the songs more so than the performance, and a rip through the originating band's finest – 'One Inch Man', 'Hurricane', 'Thee Ol' Boozeroony' and the like – is always, always going to go down well.

The same should be said for Sebadoh. There is little point or worthiness in their reformation other than to purely enjoy what they once were, but now. There is no new album in the works and I am not certain people would want one. But for a music festival, this is fine and in fact great. The longer you listen and listen intently, the easier it is to come to the realisation of the rubbishness of some of Sebadoh's lyrics, even though tonight everything else shreds.

Øyafestivalen is always more than just a music festival littered with fine artists. This year's festival was to be more than just a celebration of music, but a celebration of Oslo and perhaps Norway, too, as well as its enduring character. That's without getting overly sentimental about it, God knows the Norwegians don't. The mixture of many virtues means it is hard to leave this city, its people and the festival behind.